Across the globe millions of women and girls experience menstruation. A period. Or when we were younger our monthly cycle was often referred to as “oh my aunt came to visit”. What never crossed many of our minds was that menstrual hygiene products were not necessarily readily available, or affordable, to everyone.  And it’s not just third world countries. According to the filmmakers of the award-winning film Pandora’s Box: Lifting the Lid on Menstruation, a documentary that raises awareness  for global period poverty, nearly 1 in 4 Canadian women have said they’ve struggled to afford menstrual hygiene products. With Covid19 the situation has worsened. May 28 has been declared World Menstrual Hygiene Day to help raise awareness for this global issue.

Women and young girls are often held back because she menstruates. According to menstrualhygieneday.org poor menstrual hygiene is caused by a lack of education on the issue, persistent taboos and stigma, limited access to hygienic menstrual products and poor sanitation infrastructure. All this leads to limiting education, health and social status for women and girls around the world. As a result they are kept from realizing their full potential. 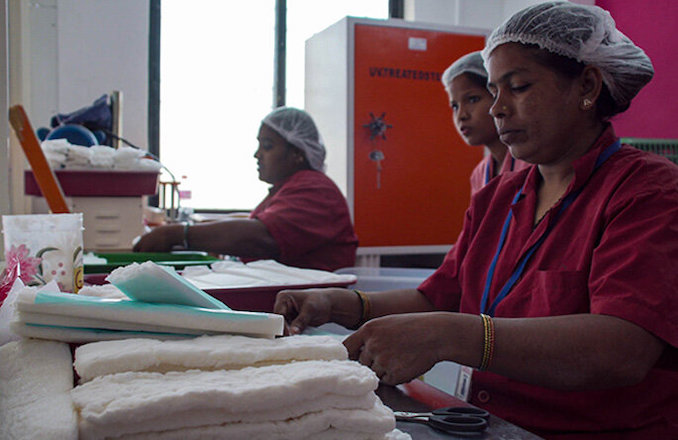 “It breaks your heart when you see what women and people who menstruate have to deal with,” says Carinne Chambers-Saini, Executive Producer of Pandora’s Box and CEO of Diva International Inc.. “People are still shunned and shamed merely because of their periods, humiliated to go to school because they have no menstrual products to use. One in ten girls in Sub-Saharan Africa miss school each year without a solution to manage their periods. This leaves them isolated and alone at home. In the film, we see that many girls who miss school are never able to return, fearful over the possibility of getting their periods in public.”

Close to 12 million women live below the poverty line in the U.S.. “In the United States, products that are deemed ‘necessary for life’, such as groceries, food, and prescription medication are Sales Tax Exempt – this does not include period care products in most states,” says Chambers-Saini.

She also tells us that prior to Covid19, research has revealed that 1 in 7 girls in Canada have left of missed school because they lacked access to period management products; and one-third of all Canadian women under the age of 25 have experienced period poverty.

This documentary reveals a ‘Pandora’s Box’ of discrimination, abuse, and misinformation, revealing impactful stories that need to be told, raising the public consciousness about the period experience.

The eye-opening documentary includes interviews shot on location in India, Kenya, Uganda, England, the U.S. and Canada. From women who were once incarcerated in the U.S. prison system, talking about their struggles to menstruate safely while deprived of basic human dignity; to an extraordinary Kenyan mother who once had to sell her body in exchange for sanitary napkins and now runs a business making reusable pads; and hip-hop artist, former M.I.A. drummer and marathon runner, Madame Gandhi, who triggers a global reaction after running the London Marathon ‘free-bleeding’ as a shock statement around issues of accessibility and affordability of menstrual care products.

Registration for the free event can be found here www.pandorasboxfilm.com

Each registration also includes a FREE link to view the film online (the link will expire in 24 hours). Alternatively, the film an also be viewed on demand on TVOD’s Apple, iTunes, Google Play, Hulu, and Vudu.

Here is the official trailer for the film…

“A Day in the Life” with documentary filmmaker Michèle Hozer

Michèle Hozer is a two-time Gemini award-winning documentary filmmaker and editor currently residing in Toronto’s Greektown neighbourhood. She has been […]

HotDocs17: What’s on our list to watch for this year’s film festival