Sia Shells is an enchanting artist based in Toronto. She is a singer, songwriter, and mermaid that rhymes about the everyday magic we find through relationships, self love and dreams.

Sia Shells has been making music moves her whole life; school musicals and talent shows found a place in her heart from a very young age inspiring her to grow into her own individual music projects and becoming her own band. Finding joy in the sounds of David Bowie, Bjork, Billie Holiday, Hole, Portishead, Tricky, Massive Attack and Amy Winehouse, Sia Shells amalgamates themes from those legendary artists into her own sound which can be described as “mermaid electro” or “dream pop”.

Sia Shells has performed for the Canadian Royal Conservatory, The annual Mermaid Ball, Nuit Blanche Toronto and has opened for acts like Lil’ Debbie.

The mermaiding?- Sia Shells has been a mermaid forever! You can see her passion for the fantastical and her mermazing aesthetic on any of her social media platforms. Sia Shells’ aquatic adventures and mermaid lifestyle have led her to star in her own documentaries on VICE and Hooked on The Look. 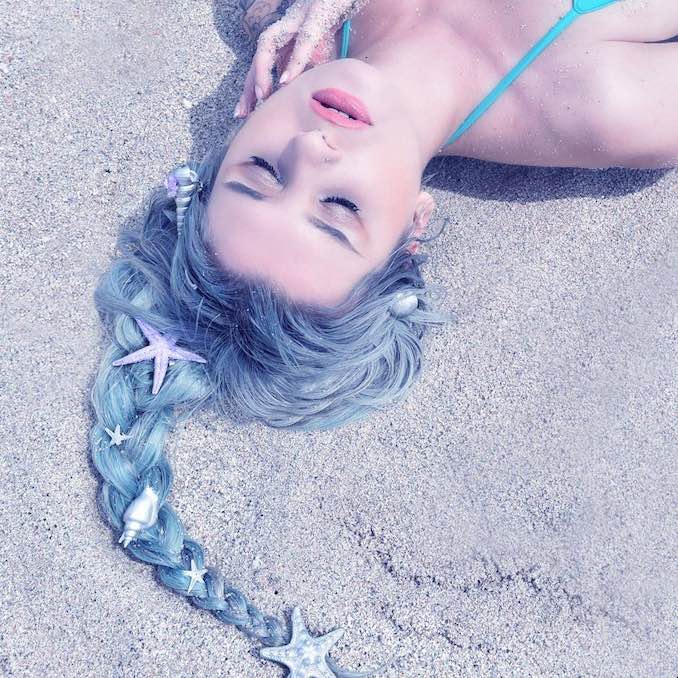 Omg, don’t make me choooose.. 😆So many musical influences have been a part of my journey throughout the years and I never know what mood I’m gonna be in next. But let’s start vocally: Amy Winehouse, Portishead, Hole, Bjork, Gwen Stefani. When it comes to musically: Daft Punk, David Bowie, Anything Mike Patton related, Massive Attack. The weirder, the better.

I usually alternate between Tame Impala (love their psychedelic vibes) and R&B or hip hop beats from artists like Joji, Frank Ocean, WILLOW, Tobi Lou, Mac Miller. I like to throw in a sprinkle of lush voices like Ari, Janelle Monae, Lorde. Gotta have a good mix of all those to get my energy going strong on a day to day!

ABBA-SOS, it’s SO good and timeless. We all need a little ABBA in our lives.

Hyping myself up pre-show to all of my fave songs on blast while dancing in front of the mirror, high energy yoga sesh, superfood vegan smoothie, trying to decide which outfit to wear… (which can take a whileeee, trust me). Oh! And kitty cuddles, can’t forget the kitty cuddles.

The Weeknd for sure! He’s accomplished so much and worked hard to get to where he is now.

Night owl always! I always get inspiration going after the sun sets! Must be something in the stars and the moon!

Studio! I love stepping inside a studio and getting the rush of creativity surging through. I’m kind of a perfectionist so it’s an ideal setting to figuring out every single little detail of my tracks. I MISS SHOWS so much! I hope they can happen again soooon because nothing beats the kind of energy of vibing off the crowd in the moment. It’s special. It’s magical.

Magic Girl is my newest drop and I’ll be releasing an adorable anime inspired music video to go along with it in mid march! Stay tuned.

Trinity is my bae.

Buddha’s Vegan restaurant has the BEST vegan lemon chicken with rice ever. For sweet stuff, I’m obsessed with Bunner’s in Kensington Market and Bloomer’s donuts!

In light of the pandemic, Luke “Fokus” Uddenberg has dedicated his time through quarantine in 2020 to revert back to […]

Formerly known as Little Coyote, Teagan Johnston, is a singer-songwriter who drives the genre beyond its current borders, bringing a […]