Fridays for Future Toronto is the youth-led grassroots chapter of the global Fridays for Future climate strike movement. As an organization, we demand climate justice through various actions, such as in-person and virtual strikes, online campaigns, and community engagement initiatives.

We take an intersectional approach to achieving climate justice, advocating for a just transition and liveable futures for all through Indigenous self-determination, uplifting marginalized communities, and empowering young people. 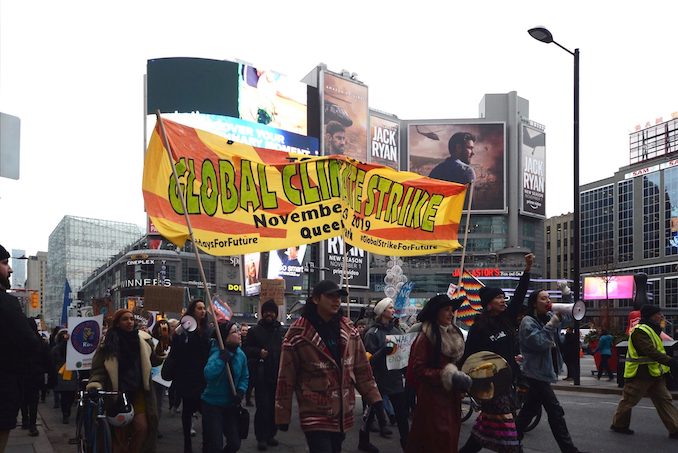 Our chapters at the University of Toronto, Ryerson University, and various high schools across the Greater Toronto Area allow us to work with a diverse group of young people to advocate for climate justice and social justice.

December 12th, 2020 was the fifth anniversary of the Paris Agreement to combat climate change by containing global temperatures to 2°C, and progressively push for 1.5°C, above pre-industrial levels.

The global average temperature has risen by 1.2°C and we have already seen the extreme damage it has resulted in. If world leaders continue to fail to protect our future, the crisis will become uncontrollable and put more lives at risk.

The United Nations summit was held to attempt to renegotiate these terms and raise the goal to 1.5°C. This generation has the last chance at reversing the effects of climate change.

Our elected officials need to be reminded that the futures of young people are at risk. We need to take action now, while we still have the opportunity. Fridays for Future has started an international campaign to pressure world leaders to fight for 1.5°C.

As an organizer with Fridays for Future Toronto, I helped coordinate an in-person COVID-safe action on December 10th at Queens Park. You can still get involved by signing the promise, sharing information and resources with friends and family, as well as calling, emailing, and tweeting your Member of Parliament, Jonathan Wilkinson Minister of Environment and Climate Change, and Prime Minister Justin Trudeau.

Help us defend our chance at a liveable future for all and fight for Fight For 1 Point 5.

Jamii is an arts organization with the intention of both community-building & nurturing women in leadership. We spoke with Isorine […]