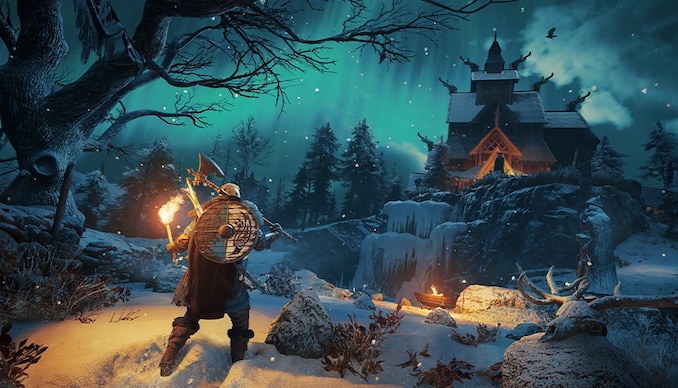 It is monumental (and maybe a tad overwhelming). 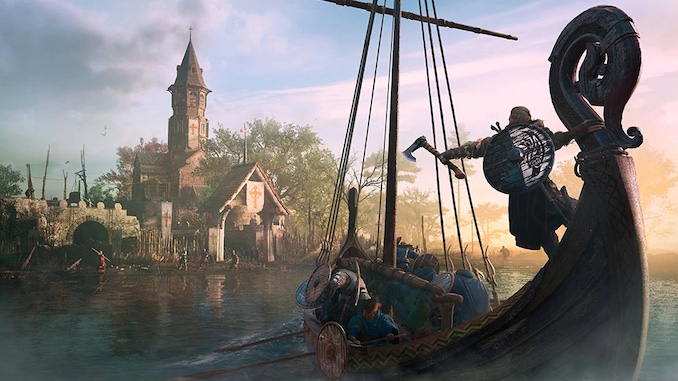 NO GOD, NO WAR

For a long time, the major selling point of the Assassin’s Creed games was the opportunity to do some virtual sightseeing. My favourite entries – AC II, Unity, Syndicate – aren’t necessarily the best, but they’re the ones that let you clamber up a newly-built St. Peter’s Basilica, explore Île de la Cité in 18th century Paris, or nostalgically retrace my old walk from my London flat down to the Royal Opera House. Hey, it’s my list, okay?

We certainly could use some of that virtual travel these days, and it’s a tad disappointing that the latest Assassin’s Creed: Valhalla throws us into a 9th century landscape bearing little resemblance to any real world location. Nominally, Valhalla is set in England, but with the exception of a certain prehistoric monument, it could be set in any generic fantasy landscape from Middle Earth to Narnia or, for that matter, God of War‘s Midgard.

Superficially, Valhalla stands in the shadow of the 2018 quasi-reboot of the God of War franchise, and going into Valhalla I was wary about a potential retread of those Asgardian adventures. That fear, however, is largely misplaced: while Valhalla has a mystical flavour to it, it’s set firmly in human reality. In other words: you may don Draugr armour, but don’t expect to actually cross swords with any undead Norse warriors. (That said, and saving any spoilers, Ubisoft Montréal has definitely done their homework: expect to see some familiar sights and “people” along the way.)

Something else that’s different about Valhalla: it is huge. The vast open world is daunting in size, and there’s so much to do and see that it can get overwhelming. Thankfully, almost every mission, whether “main” or “side”, is interesting – as is the fact that the very definition of main/side is unusually blurred. 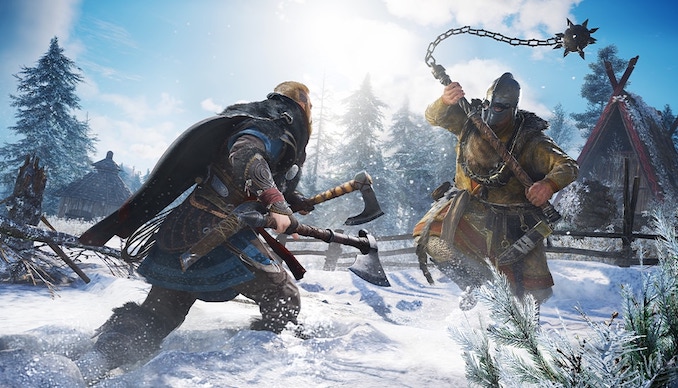 AC: Valhalla casts players as Eivor, a 9th century Viking warrior who, after a too-long Norway-set prologue, embarks for England to do the things Vikings do. Eivor can be male or female, but the main thread is the same: pillage, massacre, fun stuff like that.

To be fair, Valhalla does try to grapple with the historical realities of the Vikings, who weren’t exactly known for Wagnerian heroism. But in the same way that AC IV: Black Flag recast the nastiest pirates as likeable shanty-singing heroes, Valhalla really wants us to know that Eivor and friends were the “good guys”, despite all historical evidence to the contrary.

But it’s fantasy! And a video game! And as long as you’re okay with that, there’s an incredible adventure to be had. 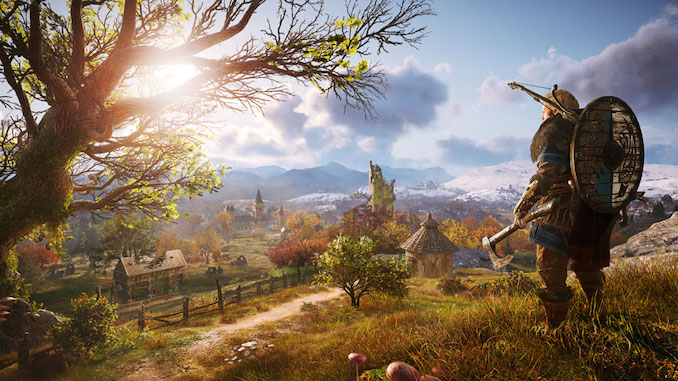 MY KINGDOM FOR A HORSE

Probably the best part about Valhalla is its structure: everything you do feeds into the single, overarching goal of expanding your influence. It’s a wise design choice, mitigating some of the annoyance of optional objectives filling up your Quest Log. Indeed, most side quests are brief and self-contained, which makes them easy enough to drop into before returning to your “main” mission.

That structure also feeds into Valhalla‘s “Kingdoms”: regions controlled by other factions who you can choose to ally with or fight against. There’s quite a bit of freedom here to set your priorities, and each Kingdom’s stories are compelling enough to make visits worthwhile.

I also really, really appreciate the way Valhalla implements its optional puzzles. Some of my favourite parts of classic Assassin’s Creed games involved tracking down obscure glyphs and solving puzzles that revealed bits of Animus-based lore. Valhalla similarly has some well-designed puzzles, most of which unlock cool weapons and gear. I still miss the AC II-style Tombs, but Valhalla‘s “Assassin’s Offices” are a fine substitute. (And don’t worry if you don’t know about the Animus; Valhalla gives very short shrift to that side of things.)

Players who have been absent from the AC series for a while might be surprised by some of the omissions in this game. That begins with stealth: AC has been moving away from its origins for a while now, and while you still carry the Hidden Blades, Eivor is far from the ninja-assassin that Enzio Auditore was. Similarly, Black Flag alumni might drool at the awesome-looking longboats, only to be disappointed when there are no sea battles. Heck, even the trademark parkour is dramatically curtailed: there simply weren’t that many skyscrapers in 9th century England. (To show how much this series has changed: you can’t even do the iconic Leap of Faith for the first six hours of the game.)

These omissions or changes aren’t necessarily bad, but they are different. And as a sucker for anything snowbound or wintry, I welcome them. I also welcome the fact that this AC, easily one of the best games this year, is also Canadian: Ubisoft Montréal can be incredibly proud of the work it’s done here.

In certain respects, AC: Valhalla reminds me of the classic 1958 Kirk Douglas/Tony Curtis film The Vikings. Those Vikings are a nasty sort, and the film does not shy away from showing their worst aspects. At the same time, Douglas and Curtis are undeniably charismatic, and it’s hard not to root for those two unlikeliest of Jewish Viking sex symbols. (Not gonna lie: I get a little verklempt thinking about my boys Izzy Danielovitch and Bernie Schwartz. RIP Izzy.)

Eivor and friends are a bit like The Vikings: brutal and merciless, and yet in the player’s hands still somehow likeable.

At 75+hours of gameplay, they’d have to be. I’ve barely scratched the surface of what Valhalla has to offer, both in terms of my own exploration of its immense world, and in describing for readers what to expect. I haven’t even gotten to the Legendary Creatures, but oh yeah have fun fighting that polar bear!

AC: Valhalla is a fine addition to the series, and even if I can’t pass by St. Paul’s or Ye Olde Cheshire Cheese as I walk along the Thames, that’s okay by me.