We’ve been spending more time at home in the past few months. That’s translated to more time in the kitchen cooking and even growing some of our own herbs, peppers, and tomatoes. Rewarding indeed.

We’ve realized that with that also may come with additional food waste. We’re looking for ways to decrease what goes to landfills. According to the City of Toronto waste management, over half of all waste produced by Toronto residents is avoidable. Planning ahead, not buying more than we can use, and just plain discarded stuff like potato skins, banana peels and apple cores can all add up.

Traditional compost methods at home aren’t for everyone. But when Vitamix recently launched the new FoodCycler FC-50 that turns food waste into fertilizer for the garden easily, it caught my attention. I was curious if it would be suitable for us in the city. 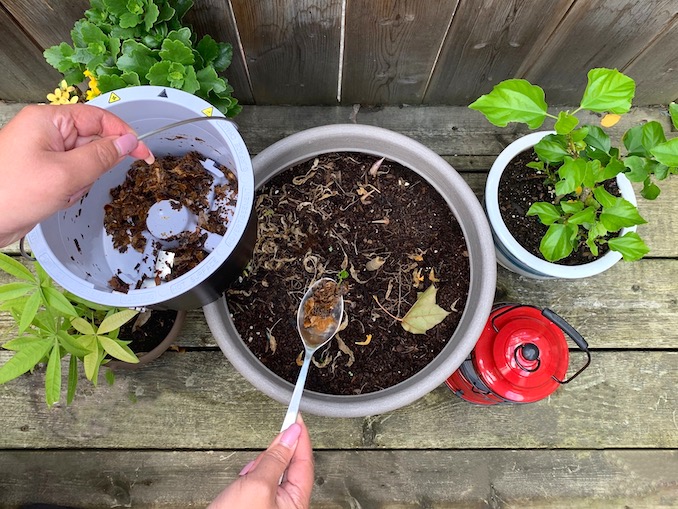 Like many cities, real estate is coveted. Condos continue to pop up and garden spaces aren’t exactly sprawling. The traditional ways of recycling food waste like composting was either digging a hole in the yard or having a bin that would often sit at the furthest corner of a yard. The attractive scent of food was a magnet for critters and curious family pets. Composting is often assumed as a drawn-out process so it isn’t for everyone. It required the contents to be churned every so often. The benefits were great but it took time.

Vitamix FoodCycler FC-50 came into the market this year (July 31) in Canada. The appliance is designed to be used indoors safely. It turns solid food waste into nutrient-rich fertilizer soil in mere hours. Hard to believe but since we’re interested in doing our part in helping the environment we wanted to see how this all works.

What’s inside the box:

The unit is pretty straightforward. Straight out of the box you will only need to remove a few stickers and two filter caps need to be put in place. There are two carbon filter cylinders that help filter expected food odours. Inside the unit is a removable bucket that serves as the actual food waste catcher. An additional lid is included for the bucket and used in between cycles while collecting food scraps.

The machine is designed for the countertop. It has a modern minimal look. But it’s probably too large to leave on the counter in a condo when not in use. If you’re like me, the kitchen counter is premium real estate. But I’ve put the machine under the counter in storage and simply haul it out when I’m ready to run through a cycle. The appliance doesn’t actually need to be left in your kitchen just the food bucket insert. But to run it, you do need it near an electrical outlet.

The inner food bucket is where the food scraps are tossed into. It can be easily removed and its compact size means it can sit on the countertop or almost replace your compost bin – more on that later. There is an additional lid provided that helps keep decomposing food odours sealed inside. Best to chop up any larger pieces of food waste and that will help reduce the processing time. Once filled to the line or below, the bucket (without the lid) is inserted into the machine itself.

Once the bucket is in place and the lid is locked in place, it’s pretty straight forward as it should be. With a simple one-touch button, the process begins. The Food Cycler runs a drying, grinding and then cooling modes. The whole process takes anywhere between 3 to 8 hours maximum depending on what’s inside – much faster than traditional composting. The sensors determine the times needed. So, no need to do any calculations. The technology built-in figures itself out. No need to open the lid at any time. The indicator lights turn off once the entire process is done.

The food bucket can be easily hand-washed or safely washed in a dishwasher. The rest of it doesn’t require any other cleaning other than a wipe down once in a while.

I had followed the clear instructions and within two days I had enough to food scraps to start a cycle. Inside I had included discarded skins from eggplants, apple cores, carrot peels, and expired greens. I kept the bucket on the kitchen countertop where I could easily access when prepping for a meal until it was filled to the marked maximum line — approximately 4 cups of waste loosely placed in the bin. The bucket went into the machine and locked in. One push of the start button and it went right to work. The machine itself is quieter than I had anticipated. I turned it on at 2:30 pm and by 6:30 pm it had turned itself off. When opened, I found dehydrated food scraps that had shrunk to about a 1.5 cups. No odours either! I added the first batch to a planter that is already being prepped for the winter. The next few batches were added to the garden as nutrients. Bonus, my dog had no interest in the resulted dried up food scraps.

Also great for families with kids who can help get involved with learning about food waste and how we can all do our part to work towards minimizing what goes into the garbage and landfills.

Ultimately, we hoped the process would be easy and it was. A simple one-touch process can’t get any easier. Clean up was fast and no odours from start to finish. It’s a thoughtful appliance and we will continue to use it. 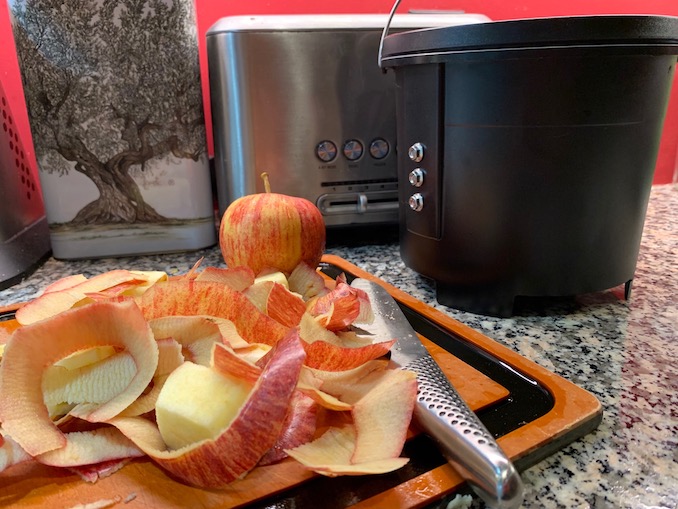 What else you should know:

Certain food waste should not be put through the system  — that goes for traditional compost methods or with the Vitamix FoodCycler FC-50. Stuff like chicken bones or fruit pits, for example, definitely should not be put into the machine – as they may cause damage to the machine. What I’ve been using it for include peels from fruit, veggies, coffee grounds, and egg shells. You can also use include animal protein and even cheese. A list of what they don’t recommend is included with the manual.

The company also offers an add-on “foodilizer tablets” sold separately — dissolvable soil probiotics that mix in additional nutrients while the food waste is processing in the machine. Personal choice. We did not opt for this.

The carbon filters will need to be replaced when the indicator light goes on. the filters help stabilize food orders during the dehydration process.

Once the food scraps have been broken down in the machine it’s best to remove out of the machine right away and use. But since winter is coming, you can also store in airtight containers/bags and keep outside for the spring thaw. Even in the least, tossing the broken down scraps into your kitchen compost bin will still help up take up less space in the landfill.

Another curiosity, I had purposely forgotten about the food scraps a couple of days after running through a cycle and left it in the machine. There was no odour.

The appliance is pretty quiet when running — thank goodness with all the zoom calls and studying happening at home these days.

Our latest Professional’s Perspective post chats with founders of GoJava. Eugene Ace is the Founder & President and Evan Birmann is the […]