Canadian singer/songwriter and pianist Theo Tams’ new video “The Last Song” shows the Canadian Idol winner as a character chameleon of sorts, all in the name of self-love and care.

“The song represents the moment you realize your own self worth,” Tams says. “It’s about recognizing you are enough, and letting go of the past. Finally.”

“The Last Song” is also the ‘last song’ on Tams’ third and most recent album release, 2018’s Call The Doctor. Reflective in both the single and album at large is Tams’ musical evolution — a genuine and mature identity mindfully created from a place of honesty, courage, and vulnerability.

“I grew up in a small town,” he says of his childhood in Coaldale, Alberta. There, Tams sang in church, and had access to a library of mostly sacred music thanks to his family’s strict Reformed Christian Dutch roots. He took his first pass at songwriting in his mid-teenage years, where “many of the songs were about knowing I was not necessarily the guy my family thought they were raising,” he shares. “Obviously, I was the same person, but I was definitely starting to question a lot of things… Not just about myself, but about my faith as well.”

It was the start of a pivotal chapter for the now-Toronto-based artist; he came out to his parents, won what would ultimately be the final season of Canadian Idol, released the album Give It All Away, and follow-up EP Back Pocket. In and amongst this, he collaborated with artist Ali Slaight to sing the holiday classics, a now-annual tradition that culminated in the special seasonal album release of Holiday Collection.

But it was Call the Doctor that became Tams’ line in the sand to both plant and grow on a deeply personal and artistic level. “I was told, ‘let’s write what you want to write,’” he recalls of a conversation with co-writer Rob Wells. “That was a career changer for me.

“I had to tell myself, ‘just do it. Go with it. Trust yourself and trust your voice. There really has been so much freedom in learning that.”

From there, the creative gates burst open and modern day Theo Tams became present and accounted for.

He morphed questioning his place in the industry into a love song gone wrong in “Good for You,” touched on his partner’s story of being once married and having a daughter in “Weeds,” and tackled the age-old ache of keeping gay love a secret in “Romeo & James” — all while breaking industry barriers of neutral pronoun placement.

For “The Last Song,” he dove deeply inward on a self-reflective journey to break a painful cycle, and visually tells the tale by being a man of many faces.

“I think we’ve all had that one relationship…” Tams considers. “The one that haunts us even years after it ends. It was important for me to try and depict all the different ways I tried to measure up, while showing the toll it takes,” he continues. “I spent years trying to prove I was worth sticking around for, much to my detriment in the end. Slowly losing yourself, and your own identity, because you’re trying so hard to be everything and everyone for someone else… I hope this song inspires anyone who may be feeling the same way.”

“The Last Song” is available now. 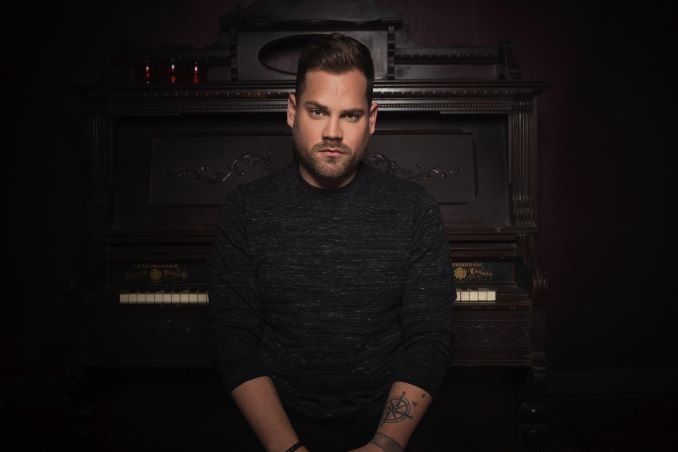 I’m a die hard Swifty (but don’t tell anyone)

I usually just go into my own head and stir a bit- I go through my set, and my talking points but I try not to rehearse too much. I want to be polished and ready, but not lose the banter. It’s important to me that each show and each audience is treated differently and uniquely.

Claire Hunter is a phenomenal songwriter, her voice gives me all the feels

Terroni all the way; you’ll find me where the wine is.

Riverdale for the win- I live in Leslieville and the East End just has such a relaxed vibe, and it’s really community oriented which I love. Everyone seems to know everyone, it reminds me of back home in Southern Alberta.

I personally gravitate more towards EPs, I think there is more opportunity to experiment with different sounds and subjects that you often aren’t able to do in an LP, I find an LP needs to be really cohesive or you’ll lose people along the way, you don’t have the same restraints on an EP

I’m definitely more of a night owl, but it depends if my step daughter is over, then I’m forced to be an early bird

I love being on the road, but I LIVE for the studio. Creating is my favourite part of the entire process.

UUUGGH, this its the hardest one yet, dammit. I’m gonna say Swiss Chalet in the winter because I love their stuffing, gimme all those carbs.

I just released a new music video for my current single The Last Song, it’s probably my favourite thing I’ve ever created. It was a really personal project from day one and has been in the works for over a year, I literally grew my beard for over a year just so I could shave it all off for this video haha. It’s been received really well since it was released, and the audience response has been really positive. You never know how things are going to be received, especially when something is so personal, but the messages and comments I’ve been getting since it came out have been really overwhelmingly beautiful. I’ll be dropping a new single in the next month or two as well, once this whole quarantine blows over! (and please god let it be soon!)

ZINNIA is the Toronto-based synth-pop project of Rachael Cardiello. With layered synth and driving beats, ZINNIA brings an explosive range […]