Our review of the board game Lifeform.
Designed By: Mark Chaplin & Toby Farrands.
Produced By: Hall or Nothing Productions.
Limited Availability(!) for purchase online. 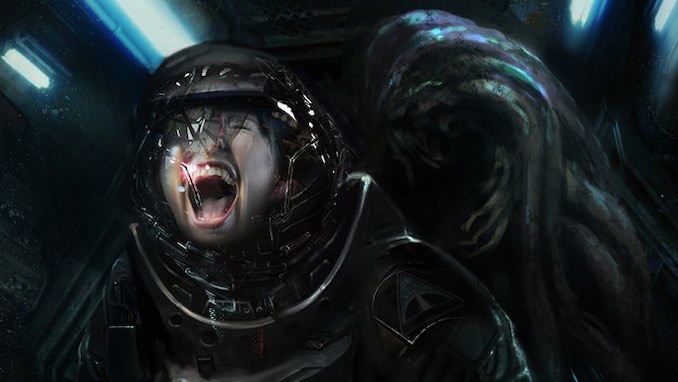 Alien: The Board Game, in all but name (or licence).

It is the Perfect Organism of Board Games.

If you like Ridley Scott’s 1979 cinematic masterpiece, sci-fi, horror, cooperative board games, hidden movement board games, and/or cats, you should definitely check this one out. 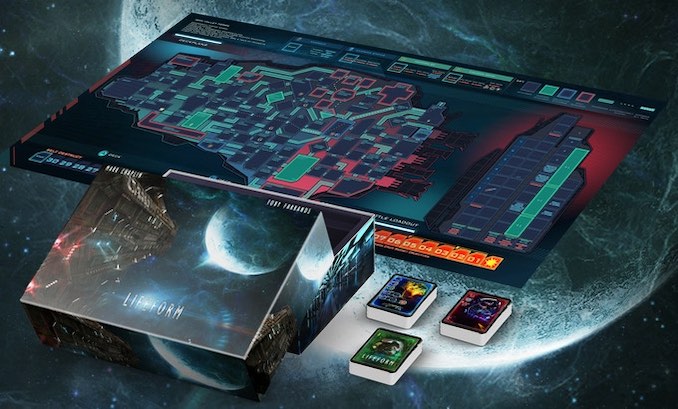 In the distant future, deep-space commercial vessel Not-Nostromo responds to a distress signal from an unexplored moon.
Down on the surface, things go disastrously awry when a bizarre crab-like creature lunges at crew member Not-John Hurt, attaching to his face.
Back on board, science officer Not-Ian Holm manages to pry this “face hugger” off, seemingly saving Not-John Hurt’s life.
Later, at dinner in the ship’s galley, Not-John Hurt begins to feel ill…

So begins Lifeform, a board game that recreates the film Alien so convincingly that it’s honestly a shame its developers couldn’t obtain the licence. Even then, it’s easily the best damn Alien board game this side of Legendary. And if you happen to own a few licensed Alien toys to populate the board with, all the better.

Appropriately for the source material, Lifeform is an asymmetrical co-op game.

On the co-op side, 1-3 players control the ill-fated crew. Characters include Ripley analogue Rashida Durrant; a space marine bearing a striking resemblance to Kurt Russell; and the ship’s cat, which my sister and I have taken to affectionately calling Not-Jonesy. Gameplay is card-based: players take turns drawing and playing from an Action Deck, each card offering a slightly different menu of options, such as walk, run, shoot flamethrower, and my personal favourite, “cower in fear.”

The crew has three goals each game:
1) Complete a randomly assigned secret objective, i.e. to complete a certain action in a certain room;
2) Collect enough “mission tokens” – blue tokens found in each room – to power the escape shuttle; and
3) Survive.

Stalking and occasionally eviscerating this motley crew is, of course, the titular Lifeform. A 2.5 metre tall alien beast of spindly limbs, jagged teeth, and acidic blood, it’s a relentless killing machine that lurks in the dark, hunts for the thrill of it, and fears nothing. (Except maybe a flamethrower, if you’re lucky.)

The solo alien player also relies on their own deck of unique action cards, which, unsurprisingly, encourage a more aggressive approach. The alien also has a great hidden movement mechanic: two to three “Lifeform” tokens that shift around the board, representing both the real alien and the misleading sensor echoes generated by the crew’s Motion Tracker.

Lifeform is a beast of a game. It contains hundreds of parts – tokens, a half-dozen different decks of cards, various stat-tracking sheets – all splayed out over a massive game board. That board, featuring a lovingly illustrated schematic of a very familiar-looking spaceship, is the setting for one of sci-fi’s greatest and deadliest games of cat and mouse (and, er, actual cat).

Make it out before the ship explodes, and the crew wins – or at least, moves on to this game’s version of the final minutes of Alien (of which more below). Fail to complete the objectives in time, or fail to keep at least one crew member alive, and the alien wins.

I cannot overemphasize how thematically sound everything in this game is. The asymmetrical structure, the offensive advantages given to the alien (including various “terror” tokens that tilt the game even more in favour of the alien), really nail the feeling of a lone predator hunting a crew of terrified and ill-equipped space truckers. Heck, if most of the crew is still alive at the end, you’re probably playing the game wrong.

If I had to identify one thematic weakness, it’s the crew’s objective of collecting “mission tokens” strewn about the ship: I’ve seen Alien too many times to count, and I don’t remember Sigourney Weaver racing about, collecting random crates like a 90s video game character.

I also would have liked to see some kind of facehugger mechanic, by which dead characters could re-enter the game as additional aliens, but I guess that’s for the inevitable expansion or sequel. As it is, I do appreciate that, at least in 3-4 player games, defeated players can chose to keep playing as either the ship’s cat or the game’s onboard computer, codenamed SIS-TER (groan).

And then there’s the endgame. 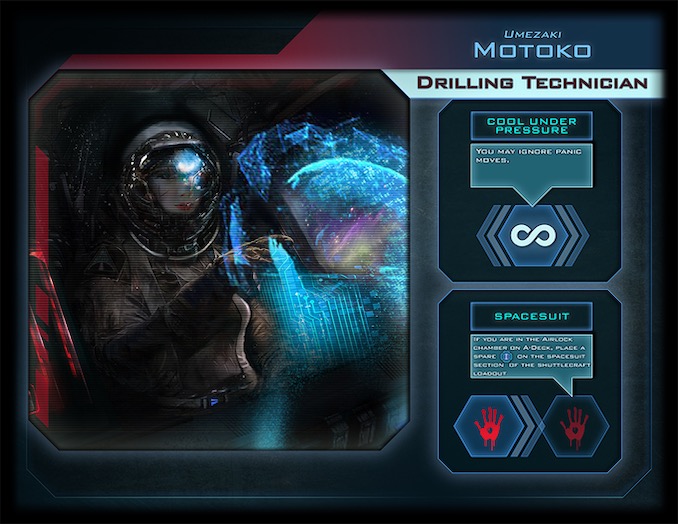 As readers will hopefully recall, Alien famously does not end with Ripley and Jonesy’s escape from the self-destructing Nostromo. Rather, just as they’re about to settle in for a well-earned cryosleep, an unwelcome and deadly passenger makes its presence known aboard their escape shuttle.

Lifeform recreates Alien‘s endgame in the form of a semi-optional second phase, contingent on whether the alien player correctly predicted, at the beginning of the game, how many turns it would take for the crew to reach the escape shuttle. If the alien player guesses correctly – mimicking the cinematic Xenomorph’s uncanny ability to always be in the right (most dangerous) place at the wrong (from the crew’s perspective) time – the game shifts to a short card battle, basically a juiced-up version of War.

During this brief final phase, the alien player unleashes all the offensive options (i.e. cards) at its disposal, while the surviving crew members defend with what limited resources (cards and tokens) they’ve accumulated over the course of the game. If even one crew member is alive after the alien has exhausted its attacks, the crew wins. 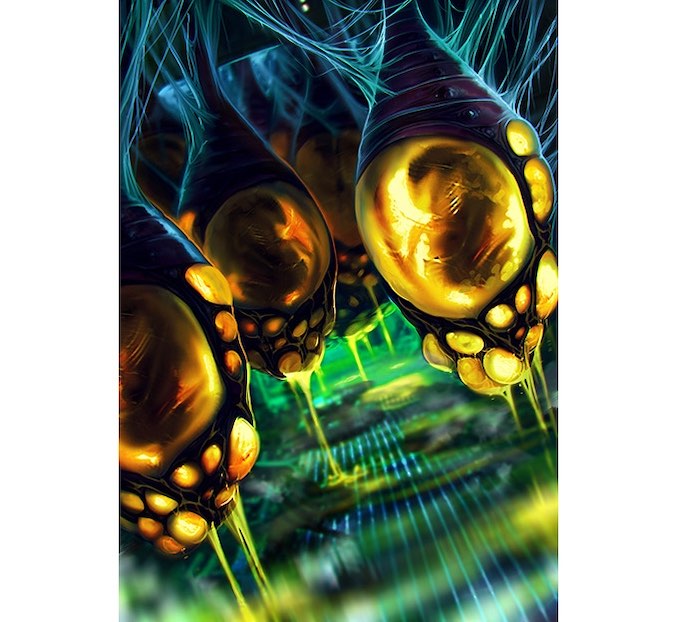 The Xenomorph is an endoparasitic organism (or so Wikipedia tells me). In biological terms, that means that each time a facehugger implants an embryo in a new host, the process is akin to breeding by symbiosis: every new alien represents a hybrid of host DNA (poor John Hurt) and Xenomorph DNA. It’s an elegant if terrifying evolutionary adaptation: what better way to vanquish your prey, than by assimilating its best features?

Lifeform, to stretch a metaphor, takes a similar approach. In combining the basic DNA of a co-operative board game with the (acid) blood-curdling terror of one of cinema’s horror masterpieces, Lifeform‘s creators have produced a near-perfect hybrid of original board game and copyright-skirting homage. Lifeform isn’t superior to the original Alien (let alone the one truly great Alien sequel, Alien: Isolation), but it’s excellent, thrilling, and just plain fun.

Watch out for those vents!

Overboss (Board Game) Review: A Secret to Everybody

Our review of Overboss: A Boss Monster Adventure, designed by Aaron Mesburne and Kevin Russ, published by Brotherwise Games. Available […]