Toronto actor Deragh Campbell is someone to keep your eyes on during the Toronto International Film Festival and beyond.  She’s in not one but three films having premieres at this year’s Festival including Anne at 13,000 Ft., a film about a volatile young woman challenged by social and professional encounters. Being raised in Stratford and Niagara-on-the-Lake and hailing from a large theatre family, it’s no surprise that she was exposed to the world of show business at a very young age. But it wasn’t until she met Matt Porterfield who casted her in his 2013 Sundance Festival film I Used To Be Darker, that she decided to pursue her acting career.

Campbell has since appeared in several indie films including Fail To Appear, Stinking Heaven, The Other Half, Never Eat Alone, The Intestine, Person to Person, and Self-criticism of a Bourgeois Dog. In addition to acting, Campbell has writing credits to her name. She recently also co-directed a feature with filmmaker Sofia Bohdanowicz, MS SLAVIC 7, which premiered at the 2019 Berlinale.

In 2015 Deragh Campbell was selected as one of the TIFF Rising Stars which showcases the next generation of Canadian acting talent that’s poised for international success. 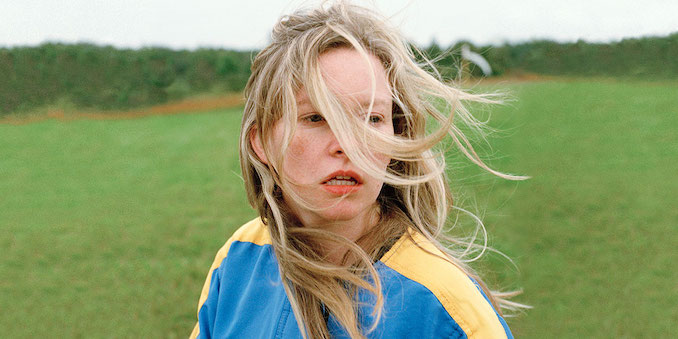 We’re excited to hear that you’re in more than one film that will have a premiere at TIFF. Can you tell us about them?

DC: Yes! The feature is called Anne at 13,000 ft directed by Kazik Radwanski. I play the title character, a woman who has difficulty coping with the stresses of everyday life and whose behavior becomes increasingly erratic. And the short is called Please Speak Continuously and Describe Your Experiences as They Come to You directed by Brandon Cronenberg and its about a young woman in an experimental psychiatric facility who is induced to relive and describe her dreams.

Will you be appearing at the Q&As at all the film premiere screenings?

DC: I did go skydiving – twice! It was completely terrifying – like a full body physical fear. It is not something I ever wanted to do for myself but I was interested in doing it for the movie and having that experience be part of the character and the story.

What would you want people to know about your character?

DC: The character Anne is really vulnerable – she can’t hide anything she is feeling and she wants really badly to be loved and trusted. Ironically, she wants this so badly that she comes on too strong and can alienate people. So I think that while she is difficult, she’s very sympathetic.

You were selected as a TIFF Rising Star in 2015. How has that helped you in the past few years?

DC: It was a really positive experience. I have been lucky to be in a lot of low-budget art house films and it was great for TIFF to bring more attention to those projects and for me to see another side of the industry.

What’s your most memorable TIFF moment ?

DC: I think seeing Death of Louis XIV by Albert Serra at TIFF 2016. Jean-Pierre Léaud plays the king in his last dying days and I’ve rarely felt so immersed in a film.

What do you love most about TIFF?

DC: Seeing movies! I’m always excited to see the selection of international cinema and the different ways people are experimenting with cinematic form. I always leave the festival with a sense of possibility.

For more information and screening times for Anne at 13,000 FT, Please Speak Continuously, and Describe Your Experiences As They Come, visit www.tiff.net

TIFF Spotlight: Kristen MacCulloch in her latest role in ‘SCARBOROUGH’

Adapted from the critically acclaimed novel by Catherine Hernandez, SCARBOROUGH is an unflinching portrait of three low-income families struggling to […]

A star-gazer’s guide to the Toronto International Film Festival

The Toronto International Film Festival is all about films…yes, and what comes with that are a wave of gifts items […]