There were so many celebrities in town over the past two weeks but one that didn’t go unnoticed was Paul Wahlberg who was in town for a very special reason. Toronto’s Famous PEOPLE Players honoured him with their ‘Daring to Dream’ award. The chef and reality show star (okay, and yes, brother to the other Wahlbergs) was selected because of his entrepreneurship, generosity and passion for helping kids realize and achieve their dreams.

“Dan Aykroyd actually started off with the award, whose actually an honorary patron.” said Diane Dupuy, founder of the Famous PEOPLE Players, a theatre company based in Toronto which employs people with physical and other exceptional abilities. Other recipients of the award include Yannick Bisson and Andy Kim.

“Now you can’t get any better than the Wahlbergs! They are the most fabulous people in the world. I saw their show on TV and thought this is the brother I want because he’s so genuine and kind. There’s something in one of the shows that I saw where Donnie was telling him and Mark they had to get more showbizzy. Paul turned to him and said, ‘Look, I’m a chef. That’s my dream!’  and I really liked that.”

Diane wrote a letter to Paul and 48 hours later she got a reply back and was thrilled. She explains that when you’re a non-profit charitable organization who pride themselves without grants it can be a struggle. In order to keep things going, they have to find ways to fundraise and sell tickets to shows and Paul’s acceptance meant a great deal to the theatre company. Not only was he honoured to receive the award, but Paul also supported Famous PEOPLE Players with a burger fundraiser to help support the theatre’s educational programs.

Diane, herself has ADHD (which she says stands for Awesome Dreams and High Drama) and explains that everyone who comes to the theatre company either has autism, special exceptionalities or are in addiction recovery. Famous PEOPLE Players has a great program for kids with old fashion values passed on from older actors. “To make a dream come true, you really have to stay on the right path in life and not follow the crowd. We are all individuals and we all have a special gift inside our hearts.”

This particular show “Rock This City” includes a highlight in the show that features the Wahlberg brothers created as puppets. “I am significantly taller,” said Paul as he laughs. “It’s like a kid’s dream when you think about. What it represents for the theatre and for the kids, it’s amazing. They do the real work and I’m really humbled that they reach out for something that’s so special.”

A lot of the kids that were in the audience for the special show featuring the Wahlbergs were from the Boys and Girls Clubs of Toronto. “What you see is sensational, and what you don’t see is inspirational,” said Diane. The show is all done in blacklight. It’s a beautiful show. After 45 years of doing these shows, I tell people while they’re looking at the colours, I’m looking at the black space, the people you don’t see who are behind the scenes.  I never get tired of looking at the show. I think about all the people who have come to the company who couldn’t ever take a bow or make change for a dollar or wouldn’t speak or smile or even pour water into a cup. I believe that every moment is a new moment. The ‘Daring to Dream’ award is all about those little things as well. 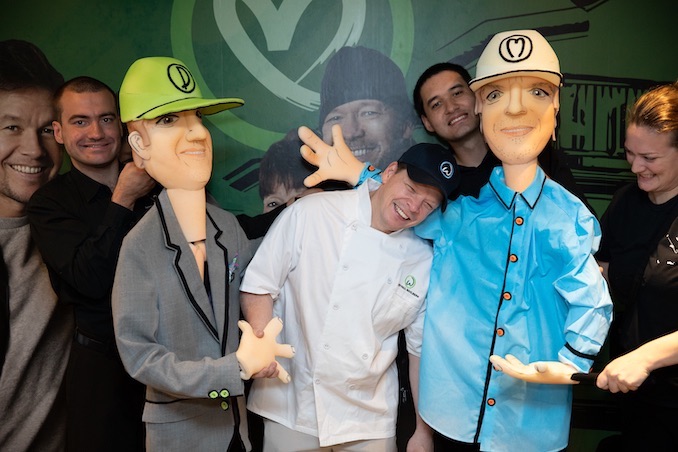 The award ceremony took place with a special gala burger lunch and show that included a tribute to the Wahlberg family with puppets that resembled Mark, Donnie, and Paul.

Rendezvous With Madness is one of the most important film festivals in our city. Now its 27th year, the festival […]

We were fortunate to be invited to the most talked about food events in the city this month. Dinner With […]

“The city hall hawk” by Andrew

Andrew on Flickr sent us this great shot of a the city hall hawk in Toronto. Check out his Flickr page to […]