Courtney Gilmour was born without hands and one leg, but that hasn’t stopped her from pursuing her dream job. Courtney is one of the country’s fastest rising comics. She won the Just For Laughs Homegrown Comics Competition in 2017 — the first female comic to win the competition ever. She performs regularly at Yuk Yuks and has appeared on CBC, Kevin Hart’s LOL Network, Just For Laughs, JFL42, as well as the Winnipeg and Halifax Comedy Festivals. She recently became a SiriusXM Top Comic semi-finalist. To become a finalist, Courtney needs your vote. Semi-finalists with the most votes compete at the SiriusXM Top Comic Comedy Finale during JFL42 for the $25,000 grand prize and title of Top Comic. You can vote for Courtney here. 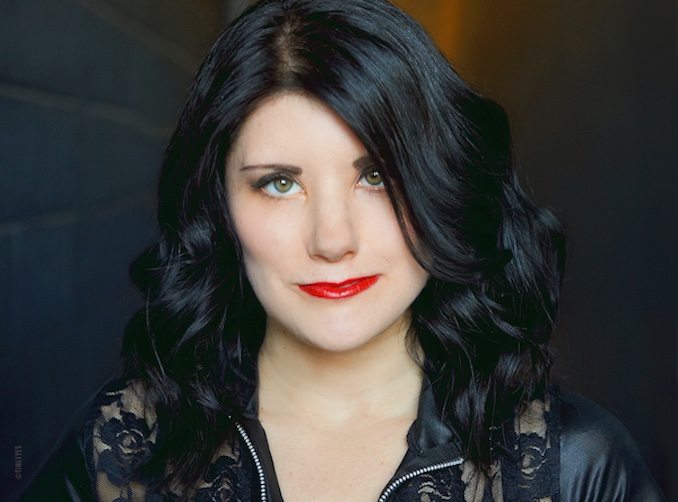 Courtney Gilmour is also raising funds through a Go Fund Me campaign for her recently acquired $100,000 prosthetic leg, which she affectionately calls her #DreamLeg. So far, the campaign has raised $45,000 of its $100,000 goal.

On Monday,  August 26 at 9 pm, Courtney is performing at the ALTdot Comedy Lounge at the Rivoli with comics Arthur Simeon, Chris Robinson, DeAnne Smith, Nigel Grinstead, Jackie Pirico, and Mike WIlmot. Proceeds from the event will be donated towards her newly acquired prosthetic leg.

We had a chance to speak with Courtney recently!

What do audiences want to know most about you?

I think they’re curious about how I live my life and what kind of sense of humour I have. I mean, I don’t take polls so I’m guessing here, but from the feedback I get from crowds after a show, they always seem to enjoy relating to my petty observations, like how I have 45 frozen bananas in my freezer that I’m never gonna make banana bread with.

What always surprises people about you?

People seem surprised by my independence and confidence, which is baffling to me. I’ve had people ask me if I’m able to live alone. It’s crazy. One of my favourite things about doing stand-up is being able to clue people into reality, to let them see that someone like me is just another person.

You’re raising funds and also awareness as to how much prosthetics cost. Tell us more?

Prosthetic technology is amazing and complicated. Even the most state-of-the-art prosthetics, which is what I’m raising money for, is not without its flaws. It’s still not perfect or anywhere close to replacing a real limb and I think that’s what people don’t understand. I’ve been calling this new leg Dream Leg. Yes, it’s incredible but it’s such a lengthy, arduous process to adjust it, fine-tune it, and have it properly fitted. Even then it’s still limited. The most expensive advanced technology on the market right now is still very limited. It’s important to note because it needs to keep evolving. People also have no idea of the cost. A standard prosthetic limb is around $10-$20K. A state-of-the-art prosthetic limb is $100,000.

Which comedian inspires you the most?

I love Tig Notaro. She does her own thing her own way and is so good at it. Anyone who commits to being themselves on stage inspires me because it can be a tough thing to do.

If you could have lunch with any comedian in the world, who would that be?

John Mulaney. He’s so funny and smart and seems charming. I think he’d be a good lunch chat.

If you weren’t performing comedy, what would you most likely be doing?

Writing! I’ve always been a writer and I would pursue that full time if it weren’t for comedy.

Your favourite places to hang out (or even dance) in Toronto? We saw a clip from your show that’s posted on your site that talks about dancing!

The Piston is a great spot for dancing on Motown nights! Otherwise, I like hanging out at the Toronto Music Garden, or anywhere around the waterfront.

For more information on how to support Courtney’s #DreamLeg visit her gofundme page.

Buzz-worthy comics Miguel Rivas (The Beaverton on CTV/Comedy) and brother Freddie Rivas (Confederacy of Dunks podcast), co-creators and co-hosts of […]