This could have been the moment that Andrew Scheer became a true leader. It could have been Andrew Scheer’s Obama moment. After controversial comments made by his pastor, Jeremiah Wright, then-Senator Barack Obama delivered a speech on March 18, 2008, that addressed  these comments in a broader speech about race that echoed John F. Kennedy’s speech on his Catholicism in 1960 – both are widely viewed as the moments that John F. Kennedy and Barack Obama turned controversy into an opportunity to display true leadership. 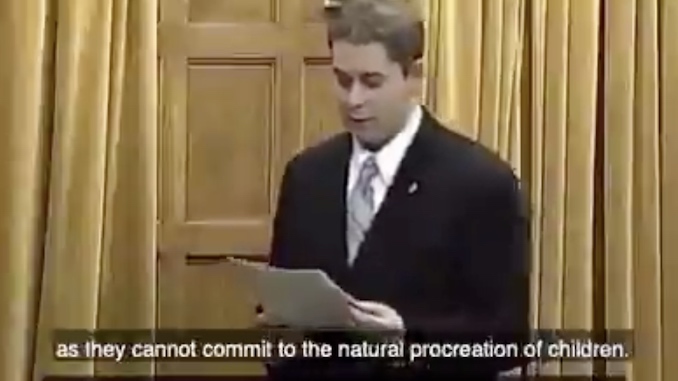 Andrew Scheer had an opportunity to step up, take the lead, admit past wrongs and intolerance, and speak directly to the Canadians whose very right to marry he once opposed. Rather than tackle the issue head-on, Scheer had his spokesman do the the job for him: Andrew Scheer “supports same-sex marriage as defined in law and as prime minister will, of course, uphold it.” Not that he supports same-sex marriage, he supports the law that legalized it. Of course, he voted in 2006 to reopen the debate for Bill C-38.

As  we have seen in the United States, laws can be changed and courts can be stacked with partisan judges. During the Conservative Party of Canada leadership race, the Campaign Life Coalition, an aggressively pro-life and anti-gay marriage religious organization, gave Andrew Scheer top marks for his voting record. “Scheer has an impeccable voting record on life & family issues during his long career as a federal MP,” wrote the lobby group. Andrew Scheer was handed the leadership of the Conservative Party of Canada by social and evangelical conservatives, and someday the cheque for that support will come due. I do not feel that Andrew Scheer possesses the strength to hold back these forces, as he has yet to show this quality in his time as Conservative  leader.

We have all held past prejudices and intolerance. We have all made regrettable comments. What sets us apart is the ability to acknowledge them, to learn from them and to apologize for them. Leadership is taking responsibility for past statements in a public and meaningful way. Leadership is not waiting to see what polling or a focus group tells you to do, it is about doing what is right for the greater good. Andrew Scheer made hurtful and highly homophobic comments in the House of Commons in 2005. He is on record comparing the fight for same-sex marriage to a dog thinking that a leg is a tail. Scheer’s views in 2005 are relevant now because he has refused to explain how his thinking has evolved in the 14 years since that speech.

Andrew Scheer: “Homosexual unions are by nature contradictory to this…as they cannot commit to the natural procreation of children. They cannot therefore be married.”

There is nothing wrong with the Liberal Party of Canada releasing this video. Andrew Scheer said those words, he made that speech, he has held these views. He has never addressed it. After winning the leadership of his party, Andrew Scheer appeared on CBC News and was asked about his position on same-sex marriage, he avoided explaining his own personal views on the subject. Andrew Scheer has had many opportunities to set the record straight. That is no accident.

I have yet to see Andrew Scheer take the lead on an important issue that divides Canadians. He always falls on the side of ideology or party first. He is running to become the Prime Minister for all Canadians, not just the ones that he shares a belief system with. It is time for Andrew Scheer to stand up and tell us who he is, and what he believes in – once and for all. This is yet another failed opportunity for Andrew Scheer to lead. When he does make a statement, it will have been vetted through party leadership, through advisers, through focus groups and stripped of anything of value to the LGBTQ2 community who deserve leadership from Andrew Scheer.

The Climate Change Plan That Is No Plan At All

Will The Real Andrew Scheer Please Stand Up

Who is Andrew Scheer? It has been two plus years since he became leader of the opposition and Canadians are […]