To listen to Andrew Scheer, Canada is currently in a crisis of epic proportions when it comes to immigration – both regular and irregular. According to Andrew Scheer, Canada has ceded sovereignty over our borders by signing onto the UN Compact on Migration. As with Canadian Conservatives – everything is a crisis or scandal. As with most Conservative crises, there is often more myth than fact when it comes to immigration.

Let’s look beyond the fear mongering and conspiracy theories regarding the UN Compact on Migration, asylum seekers, and immigration itself.

The UN Compact on Migration is legally non-binding. It is based in the values of state sovereignty, responsibility-sharing, non-discrimination, and human rights. It recognizes the need for a cooperative approach to develop the benefits of migration, while mitigating the risks and challenges for individuals and for countries of origin and destination. It is a plan to address what is going to become or has become a worldwide problem. It is like developing a fire safety plan for a school, or a home but on a much larger scale.

The UN Compact on Migration is a necessary tool in helping to deal with the rising level of global migration. Right now there are 258 million migrants around the world living outside their country of birth. Without proper regulation it can overwhelm the infrastructure of host countries and lead to increasing levels of danger for the migrants themselves. Without this document there is vacuum in an issue that needs leadership from the world community, and needs leadership from Canadian politicians. For me it is simple. The world is changing, often for reasons beyond our control, we can either think and plan ahead proactively, or the costs can triple if we react and fail to plan.

In fact, Andrew Scheer was accused of lying about the UN Compact on Migration by a former Immigration Minister that he served with, Chris Alexander. There is no immigration or crisis regarding asylum seekers in Canada. There is zero proof to back that up.

Yes, refugee and immigration policies are separate, but the Conservative Party of Canada often conflate the two in an effort to pander to the low information voter.

It is perfectly legal to cross a border and initiate a refugee claim. In fact, this is what Canadian law demands of asylum seekers. Our own law stipulates that it’s not illegal to cross a border informally, as long as that person presents themselves to border services without delay. Border crossers are not committing an illegal act.

The 1951 UN Refugee Convention states that no signatory country will return a refugee seeking asylum “where they face serious threats to their life or freedom.” Refugees who present themselves are able to make a refugee claim. That is the guiding principle of Canadian immigration law. Something the Harper Government, of which Andrew Scheer was a senior member of, never once tried to change.

There is also no queue jumping. Asylum seekers are not displacing, or taking the place of an immigrant who applied to come to Canada through a formal process. Canada has a quota for the number of refugees it brings yearly, either through the private sponsorship program or the government assisted refugee program. The quota is not affected by the number of asylum claims that are made at the border, or through informal border crossings.

There is no illegal immigration. Repeat after me. PEOPLE ARE NEVER ILLEGAL. To claim otherwise is solely to dehumanize refugees or to sell a racial component to your argument. We cannot control the geopolitical and economic causes of migration, or that drive asylum claims – but we do have a duty to uphold our treaty obligations and international law. 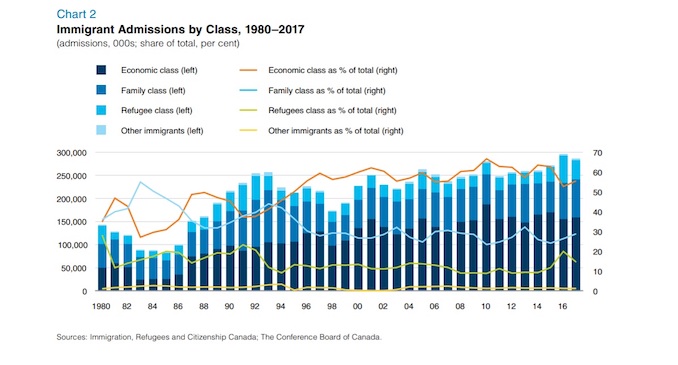 A no-immigration, or lower immigration policy world would result in weak economic growth and fiscal strain—a situation that would reduce the motivation for private investment. Productivity-enhancing investments would not fully compensate for the negative impacts of a shrinking workforce. Our economy requires increasing levels of immigration to maintain population growth and to mitigate the negative consequences of our aging population and low birth rate.

Without immigration Canada’s potential economic growth would slow from 1.9% to an average of 1.3 % annually. In a no-immigration scenario, 26.9% of the population would be 65 and over by 2040. 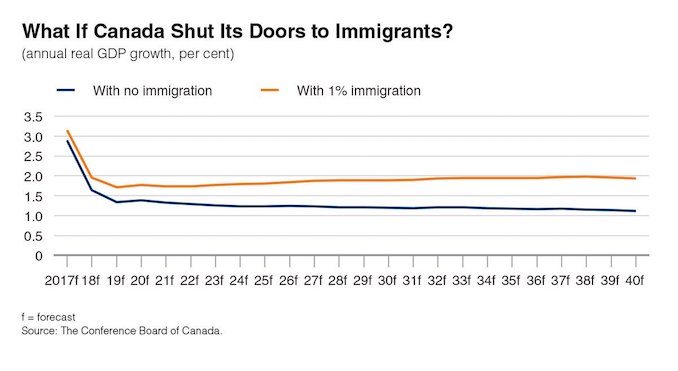 Let’s look at productivity growth in relation to Canada’s economic growth, with and without immigration. Productivity growth is important because it is among the three components that allow Canada to increase its potential output and the living standard of its citizens. Potential output measures the highest sustainable level of real GDP that an economy can attain based on its productivity, labour supply, and capital stock (the total value of physical capital within an economy).

To help offset the negative economic and fiscal impacts of a shrinking labour force in a no-immigration/lower immigration scenario, Canada would need to rely more on productivity-enhancing capital investments to substitute workers. That would be impossible in the higher tax world it would take to maintain Canada’s social safety net without the adequate increase of immigration to maintain the financing of our social program spending.

This is where Conservative ideology falls apart. I am talking about 1%. The 1% scenario being used by the Trudeau government proposes that Canada will gradually increase its immigration levels over the coming decades to replenish its rising wave of retirees and to grow its labour force. Canada welcomed 300,000 immigrants in 2017, and Canada has set targets of welcoming 310,000 immigrants in 2018, 330,000 in 2019, and 340,000 in 2020, etc. Our immigration levels are at 0.824% – that is not only sustainable but also required. And that is what Conservatives are railing against: less than one percent of our population.

It is not hard to see why evangelical elements of the Conservative Party of Canada favor a no-immigration policy. It gives them an excuse to attack reproductive choice, it becomes an economic or population level debate as opposed to a debate on religious ideology alone. It allows Conservatives to view women as nothing but incubators for the purpose of procreation. It gives conservatives an excuse to promote the family unit as the only hope to grow population and delegitimize same sex marriage on the grounds that Andrew Scheer himself once used.

The evangelical conservative dream is to restrict women’s choice and even divorce itself.

We do not live in a post-fact society. For every bumper sticker slogan surrounding immigration from Conservative politicians, there are facts, statistics, and the human beings behind both. History will judge us on how we act regarding immigration.

(note: all numbers and graphs are from the Conference Board of Canada report, Imagining Canada’s Economy Without Immigration)

It’s that time of the year again – Canadian comics are about to flood the internet with pleas for votes. […]