Alex Southey is an Indie Folk artist born in Ladner, BC, and raised in Toronto, ON. His experience spent ping-ponging back and forth between the two provinces for a mixture of schooling and travel have not only had a significant impact on his lyrics, which marry autobiographical details to geographical details, but also on what has become a downbeat, autumnal musical sound.

Indie folk artists are a dime a dozen and what sets Southey’s lo-fi music apart is its heavy incorporation of strings and other accompanying orchestral instruments (most obviously on his debut EP Written in Vancouver, Nelson, Kelowna, and Toronto), in addition to an overall lack of musical boundaries, born out of experimentation in the folk genre.

In the next year or so, he will move to include more fleshed out, rockier material, reminiscent of Car Seat Headrest and Mitski, in addition to the Autumnal stuff.

He has been performing around Toronto’s downtown core for the better part of a year, and is seeking not only to increase the amount of dates he plays, but also venues. 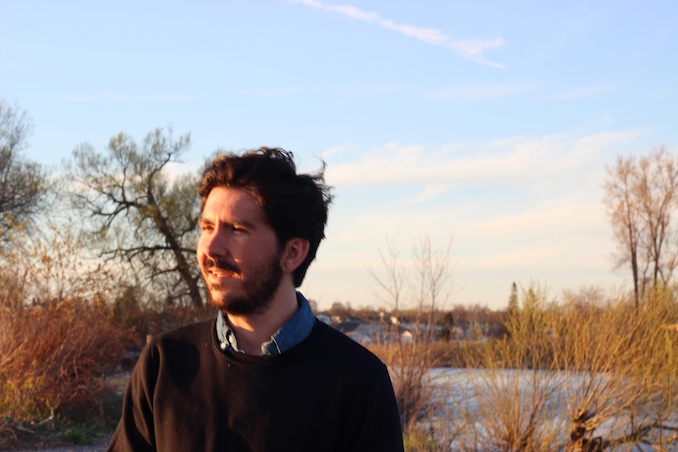 Latest Single: “We Have Been Here for a Week” off  Written in Vancouver, Nelson, Kelowna, and Toronto.

Doomie’s at Queen St. West and Brock Ave is cool.

Radiohead. Does the acoustic music throughout a Gilmore Girls episode count?

The intro theme to Frasier. Although to say I feel guilty about the pleasure I get from it would, simply put, be a gross lie. “Scrambled eggs all over my face / What is a boy to do?” Absolute nonsense.

Coffee at home and a beer at the venue before the show. Having coffee is my life’s ritual. I think playing music is just a break from it.

Feist is the greatest. Feist. Alvvays.

Really depends. I like the idea of artists releasing collections of tracks that make sense. If the collection is the length of an EP, great. If it’s closer to an LP, that’s also fine.

I am a night owl on an early bird’s schedule, and I haven’t been fully lucid for months.

Playing live for sure, whether it’s on a road or in an actual bonafide building.

Follow me on Soundcloud at AlexSouthey, and on Twitter @AlexKSouthey. I’ll be putting my music on Spotify and-or Bandcamp sometime November 2018.

Any Shows or Albums Coming Up?

Both! I’m playing a show as a supporting act at The Cavern Bar on Church, November 14th, in support of The Good Few, an indie rock band from NYC.

New EP just released – One with a pretty Canadian, Northern-style bend, and a cohesive concept. Canada’s Northern Stories available on my SoundCloud.

Mandolynne is an emerging indie alternative artist based out of Hamilton, Ontario. Since 2017, She’s been a part of various […]

Sidny x Chaix is the collaborative project of vocalist SIDNY and producer Chaix. The Toronto based duo formed in 2019 […]