The Second City’s contribution to holiday joy is the new comedy revue, The Good, The Bad and The Ugly Sweater. This show is an ideal alternative to the annual staff Xmas party; Get out of the office for goodness’ sake! It happily pokes fun at annual holiday traditions as well as common frustrations with festive activities like shopping and gift giving. On now until early January. 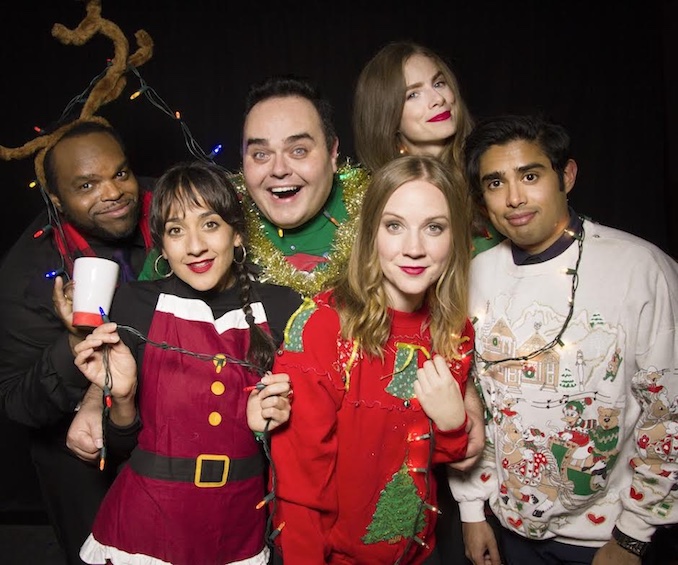 Celebrate the holiday season by perhaps laughing at the whole darn thing. The Good, The Bad and The Ugly Sweater expertly sorts the good from the bad regarding Christmas time. Starting with the bad, oh so much bad. From having to attend an ugly Christmas sweater party to the frustrations of listening to too much Xmas music and the sinister goings-on of The Elf on the Shelf. Reminisce about crappy Christmas gifts past. Cringe at a child’s meltdown and temper tantrum while gift shopping. Oh so many things will be familiar to you during this comedy show, but you will be in a safe place….until you head home to your family for the holidays!

Besides the overriding bah humbug sentiment of many of this show’s satirical sketches, there are a number of upbeat song and dance numbers, including a sweet ditty about orphan Christmas trees and a Matrix inspired snow shovel battle. Santa also makes an appearance, and with the help of some hilarious audience participation, he composes a few amusing naughty lists. There is also a great improv sketch that tackles how couples make the festive season work. Overall The Good, The Bad and The Ugly Sweater delivers the milk and cookies along with a bellyful of laughter.

As mentioned, this is the perfect show to extend a holiday office party, or, treat mom and dad out to a night of Xmas cheer.

A good show for ages 4 and up!
Tickets Starting at $12
secondcity.com/shows/toronto/showstorontomiracle-mercer-street

About The Second City

The Second City, a 100% Canadian-owned company, is the world’s premier improv and sketch comedy theatre company, with resident stages in Toronto and Chicago, Training Centres in Toronto, Chicago and Los Angeles, as well as touring companies performing throughout the world.

The new sketch comedy show, The Best Is Yet To Come Undone, confronts how pathetically sad and ugly insecurity and […]