Montreal’s Geordie Productions and their acclaimed production of INSTANT by Governor General Award-winning playwright Erin Shields is currently on stage in The Studio at Young People’s Theatre. It’s a timely teen piece on the need to be noticed and the impact of social media.

The story centres around three young characters with different paths in life. Meredith is a singer-songwriter who has her eyes set on becoming famous. Jay is a gifted hockey player who aspires to play in the NHL. Rosie is raising money to pay for her father’s expensive medical needs. All three want to get noticed….and then social media triggers an avalanche of controversy.

We had a chance to chat with Dean Patrick Fleming about this very timely play and the impact of social media on youth today. 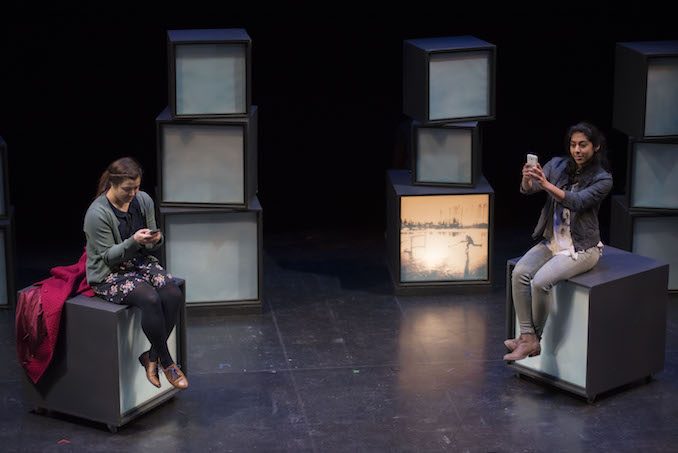 Social media is such a trigger for conversation today for all ages and addressing the tween/teen age group isn’t easy. How do you keep this audience engaged?

DPF: In many ways I find this audience one of the easiest to engage… if the content and manner of performance is interesting to them.  If we remember how smart they are and how fast they process information then I believe that they respond incredibly well to theatre. Teenagers are processing machines. They are so aware of messages being sent out by their peers, their friends, parents, teachers…everyone and they take these messages in and react to them all the time. They are also learning constantly and so are so good at taking in information at a speed which adults don’t anymore. So I’m always aware of choosing content that I think will interest them and then challenge myself to tell the story in a way that will keep up with them.

What has the audience’s reaction been so far? Feedback? Again, tough crowd who thinks they know everything, right? I mean, we’ve all been there.

DPF: We’ve had great reactions. The audience gets into the sub-story of Jay and Meredith which is a love story in a lot of ways. Erin wrote a great play that is about three people we can relate to and care for which always makes for good theatre. The speed of the action keeps them on the edge of their seat, the stakes are quite high and the humour has certainly helped. So all the feedback has been really good so far.

What’s the most surprising thing you’ve learned about social media, maybe from the teens, while directing this play?

DPF: I think I sort of knew this but it certainly became clearer to me that there are rules of social media. It really is a society all on its own and there are big repercussions to what you put out there and how. The other thing is how fast one platform becomes uncool. Facebook is an old person’s platform and has been for a while. When you do a play with social media in it you need to look at how to use it. We changed the platforms and words used pretty often to make sure that what the characters were doing and where they were doing it was believable.

Should parents come and see this with their teens?

DPF: Sure. Adults have reacted well to the piece and I’m always interested in creating conversations between parents and kids. So absolutely. The hardest part about teens is actually getting them into the theatre so I’m all for parents bringing them- but let them watch the show in the way they want. Don’t ssshh them or tsk at how they react. If the play is good they will engage.

What would you want them, the parents,  to know?

DPF: I think as adults and parents we often see the danger in something and our impulse is to talk about the danger or try to get rid of it. In the case of social media and posting online I think there is a much more interesting and useful conversation to be had. To say don’t post online or I forbid you to use social media is, I think, not really useful because it is a part of their lives. It’s integrated into our world so you can like or hate technology but that doesn’t really matter. What does matter is the conversations you have about what is public, what is private, about being thoughtful, about confidence and about what’s important.

There are also a lot of ways for educators to take this further into the classroom learning? Can you tell us about that?

DPF: Both Geordie and YPT  create great teacher’s guides in relation to all the shows and that’s a very useful tool to start with. I think opening up the door for meaningful conversation is always what we are striving for in the theatre so the question is how to get the students to start talking and sharing and guiding the conversation a bit so it doesn’t become about blame or judgement. Things go wrong in this play and people make mistakes. It’s important not to judge the characters on the mistakes they make but rather looking at the circumstances that led to them and the repercussions and solutions.

Most importantly I think it’s important that the students are made to feel they are in a place that they can really talk about what they’ve seen. It may take a while but an insightful conversation will certainly happen.

October is a month of giving thanks, fun and scary boo stuff and we’ve got a lot of events happening […]