Virtual Reality is now available for the Sony Playstation. Here is a review of the system and the best Playstation VR games that are available at launch.

So, VR is finally here. Considered by many, the “future of gaming”, all gamers have, at one time or another, dreamt of a true 3D virtual reality home-setup. Playstation 4 along with Sony have answered our wishes, making the PSVR available to the public, on an easy to use console, with minimal setup required – albeit for a hefty price tag ($699 for the bundle, or $549 for just the headset with NO MOTION CONTROLLERS, & NO CAMERA – which is REQUIRED TO USE VR). This is no beta test kit from Oculus Rift, this is Sony’s Virtual Reality headset and it is available now at video game stores worldwide.

What Does the Playstation VR Come With (Hardware):

WARNING: Unless you already own a Playstation Camera, YOU MUST BUY THE FULL BUNDLE FOR PSVR TO WORK. It does not work without the PS camera – so buying the headset alone for $549.00 is almost useless. In fact, even if you own the PS Camera, I’d suggest going for the Bundle and selling your extra camera to someone online – as you get 2 Motion controllers (worth $130 separately), which you will want for the better games. Or you could NOT buy this novelty item entirely and save yourself a headache. Literally.

The headset is built well and is comfortable. Not too heavy, and secures to your head pretty well with a sliding back strap that is tightened the turning of a wheel. If you don’t already have a Playstation 4, we are talking about a $1200 investment to just start playing VR with only the demo disks. Granted, when you have everything, and a decently good game, it works incredibly well, and you are initially amazed at your 3d environment. But after a while, like anything, the amazement wears thin – only used when friends who “wanted to try VR” came over.

At precisely this point, you just want to take the contraption (that is bombarding all sorts of rays, directly at your retina from less than 2 inches away) off your head, so you can relax and play regular video games, on a regular TV from a reasonable distance. (Didn’t your parents tell you not to sit too close to the screen?)

You don’t realize the screens are so close to your eyes (due to an optical illusion created by the lenses), but after a while you really feel like you have been playing while sitting 2 inches away from your flat-screen TV. I don’t want to say that it is nauseating – I never threw up or anything – but it definitely makes you “uneasy”. Most people want to relax after work or school and play some video games, not strap into some machine that bombards X-rays into their face – and gives them messed up dreams… Honestly I had a dream that a raccoon was attacking my back the night after playing VR for a few hours. 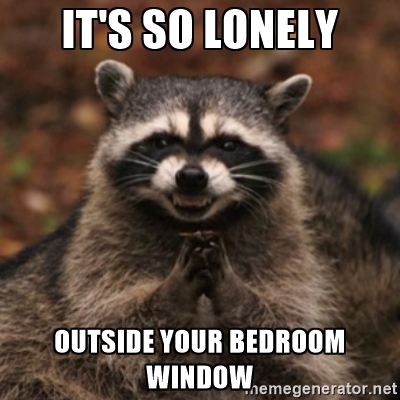 This thing actually messes with your sense of reality – I went out to a bar after playing – and I felt so disconnected and weird – kept looking at my hands… We honestly don’t even know the mental effects of Virtual Reality, let alone the physical effects – and I’m a relatively sane person – but PSVR had me questioning my reality…

There is one other major problem with Virtual Reality. Everything that regular people want to experience – are the types of things regular people cannot do, without proper training. Let me guess, you want to get VR – so you can fly a spaceship? Drive extremely fast cars? Be Spiderman or a Mech Warrior? Well all of those things, if you did them in real life, for a few hours, you would probably throw-up everywhere. If your brain was lucky enough to not be crushed against the inside of your skull, and you survived, you would never want to do them again.

The best games for Virtual Reality are games where you don’t move around very much. I personally found that one of the best uses of VR is when you are the “camera”, and can look down on a game environment, like a tabletop board game. This is where VR really shines – think something like a “chess board” in front of you with little 3D characters you can control.

One game genre (that is lacking in the release titles available) that would really lend itself well to VR, would be a Real Time Strategy game, with massive controllable battles. If you are a huge RTS fan – and have always wished for a way to play RTS on console – this would be by far your best option (if a good RTS game existed for Playstation VR…)

Right now the only games like this are platformers aimed at a young audience but are actually quite fun – and with a little imagination I could see a really good “Lord of The Rings” type RTS game coming out someday for VR. Until the software gets developed more, and major AAA titles start including VR mode into every game – I would not buy PSVR without at least trying it first.

What a great concept for a game. It is the future, robots do all the work, and you are visiting the “job museum” in the year 2020 to see what it was like to work a mundane job in the 20th century (before the robot takeover). This game requires 2 motion controllers to play – and each controller is one of your “hands” – and the game is played 1st-person. There are 4 jobs to choose from: “Gourmet Chef”, “Auto Mechanic”, “Store Clerk”, and “Office Worker”. The physics in this game are amazing – and there are a ton of “Easter eggs” in every level, giving the game some means of re-playability. You can grab and throw almost every object in the work environment and you can even stand and move around a little while playing. It makes for some incredibly funny moments – as an auto mechanic throwing tires at your customers or stealing their hats or glasses. By far, this tops the best Playstation VR games and it is only $39.99 on the PSN store. A must buy if you own PSVR.

The disk that comes with the PSVR bundle, it has 5 different games, however the only one worth playing (more than once) is “The London Heist”. In this small story you are thrown into a kind of “Transporter” type story where you pull off a heist in first person. Highlights include riding shotgun in a car while being chased by henchmen with guns. It is basically a “on rails” shooter but really showcases the dual motion controllers as “hands” used to shoot and reload clips. One of the best modes in the London Heist is the “Shooting Range” where you get to dual wield Uzis and take out targets. It is awesome shooting in two different directions at once, on some “Boondocks Saints” type-ish. However for $1200 you might as well buy dual Uzis in real life, and a membership to a shooting range.

This game really showcases the “board game” top down idea of a “platformer” on VR. You control a little girl, that survives a plane crash, and lands in a strange land filled with puzzles. You help her navigate room after room switching between top-down view and first-person mode where you use both move controllers to control her “hands” and solve progressively harder puzzles. The graphic style is very cartoon-ish but looking down on the world from above really feels incredibly cool. This is the game that made me think that a large scale RTS game would be incredibly cool in VR.

A free download from the PSN store, this is basically the equivalent of the Playstation Eye Playroom, but for VR. It is really programmed well and is one of the least nauseating titles I got to play. The graphics are clear and crisp and the small mini-games are fun enough to play a few times. There is a room full of little collectibles you can collect by playing the mini-games so there is actually some re-playability here.

Another free download from the PSN Store, this is a collection of almost all the games that were available at the VR’s release. Basically this is your chance to try all the terrible games they are trying to pass off as legitimate titles. Rez Infinite? A Dreamcast game from 2001… really? Is that some sort of joke? At $39.99 it is no joke. It is awful. Hypercube? It is literally PONG. Are you kidding me? There is even a game where you are a “space beetle” and you jump lines of “energy” – with no end in sight or motive… why are you a beetle? Who is sending these killer lines of energy at you? What are you running from? What is a space beetle? So many unanswered questions… It’s literally worse than a screensaver.

Also this is your chance to try DriveclubVR… what? You don’t want to drive at 200kmh for 6 hours in career mode with a thing on your head? After working a long day, you don’t feel like driving to Sudbury? Weird.

Maybe you fancy strapping into a Mech suit in “Rigs”? Oh? Jumping 600 feet into the air isn’t as fun as you thought…? Why not try Eve: Valkyrie. There you can fly a spaceship at inhuman speeds, in zero gravity, where there is no up or down, left or right. That’s not a recipe for motion sickness at all… Just don’t press L1 (the “throw-up button”), which makes you spin in a nauseating barrel roll.

Tumble is a fun stacking game that requires you to stack various shapes to reach a bronze, silver, or gold height level. It can be tricky to stack when using polyhedrons. This game uses the controller to place the blocks but would be great if one could use the move controllers as hands. Very Jenga-ish.

This is definitely a “Try”. It really is amazing – and truly 3D. However, for the reasons stated above, it is not really practical to own – and the software is not quite up to par for 2016 (sorry Rez Infinite, Hypercube, and Space Beetle… but you are terrible excuses for titles). I would have liked to try Batman: Arkham VR, as it got great reviews but we did not receive a copy to review. I assume it is somewhat like Job Simulator but with a Batman theme…

The bottom line, for me, is actually a realization I made, after trying PSVR for this review: I don’t think Virtual Reality will ever be successful in our homes, until we can create “Star Trek-like Holodecks”, or “Matrix-like” mental realities with implants or other technology. Wearing a headset is too cumbersome and annoying. Sorry Sony but I will pass.