A great new book has come out by Award-winning Toronto photojournalist and activist Jo-Anne McArthur. We Animals includes over 200 pages of 100 photographs as well as documentation from McArthurs journey exposing the cruelties the world has forced upon animals.
“We Animals is a project and archive that makes visible the barriers that humans have built which allow us to treat non-human animals as objects and not as beings with moral significance.”

McArthur is also the focus in the movie Ghosts in our Machine which follows McArthur through many parts of the world on her photojournalistic crusade.
Dr. Jane Goodall, primatologist and author, says of We Animals, “Powerfully disturbing. These images take us to dark and hidden places visited by only a few determined and courageous individuals like Jo-Anne McArthur.”

How much time passed between the oldest photo and the most recent photo in the book?
I thought of the project and its title, We Animals, probably around 1998, but I believe the earliest We Animals image in the book was shot in 2003.

How many countries are represented in the book’s photos?

I’ve been to over 40 countries to shoot for the project but I found that there are a lot of images from where I shoot the most, which is North America and Europe

How many different species are in the book?

I tried to make sure a good number of different animals were represented. The book shows the gravity of a lone minnow, in a dirty bowl with no enrichment, who had lived there, just floated there, for 2 years. You also meet those we know to be among the smartest of animals, such as elephants, chimpanzees and dolphins. The book also introduces us to reptiles in captivity, birds as well.

What are some of the poor conditions we face here in Canada?

In Canada we eat around 565 million animals a year. As you can imagine, these animals are kept in extremely cramped conditions in factory farms; there simply isn’t the room to allow them to live out on pastures.

We do this to satisfy our consumption of really cheap meat. Pigs can’t turn around in their crates on cement floors. Layer hens share cages stacked sometimes 5 high in huge barns, and the norm is to have 5 hens in each small cage. I’ve often seen up to 7 and 8 in a cage. There’s no room for them to stretch or flap their wings. Beyond the problem of space, animals also have their teeth cut, ears tagged, tails cut off, castrations without anesthetic, beaks burned off, so that we can identify them, stop them from injuring each other, which they do, due to the stress of confinement. It’s a cold, cruel and efficient system.

The transportation of animals is also badly in need of reform. Animals are sometimes transported days without food or water. They are also transported in extreme weathers, such as this very week. There’s a group called Toronto Pig Save and their work is featured in the We Animals book. They bear witness to the animals coming into the slaughterhouse in Toronto. In the heat of summer they are stressed and thirsty, and in weather like this, where their sensitive skin is exposed to winds for hours, they barely move inside those trucks when we see them.

What are some of the ways we can help?

I love this question. First and foremost, we can consume less. For the animals, for the planet, for our health. Consume less of everything, especially the amount of animals we eat, which is often 3 times a day. It’s unnecessary. If we all reduce our intake of animal products, there will be fewer animals suffering. Aside from that, we can use our skills, whatever they may be, to make the world a better place for animals. I think it’s important to help animals and the environment in a way that we’re good at, so that it doesn’t feel like a chore, and so that we’re doing a great job at it too. I have a long list of how to help here on the We Animals site: www.weanimals.org/howtohelp

Are there some ways to eat dairy without the risks?

I’ve been vegan for 11 years and I find that it’s a peaceful way to live. So, no, I’m not into promoting “humane” or “free range”  alternatives, which are largely unregulated and unenforced terms anyway. There’s a green-washing of the big ag. industries and I’ve seen large barns full of cramped birds that are considered “free run”, and, it’s easy to just not eat these animal products, especially in Toronto where every sort of alternative is available to us. As the motto for Edgar’s Mission sanctuary says, and I just love this, it’s so simple: If we could live happy and healthy lives without harming others, why wouldn’t we? 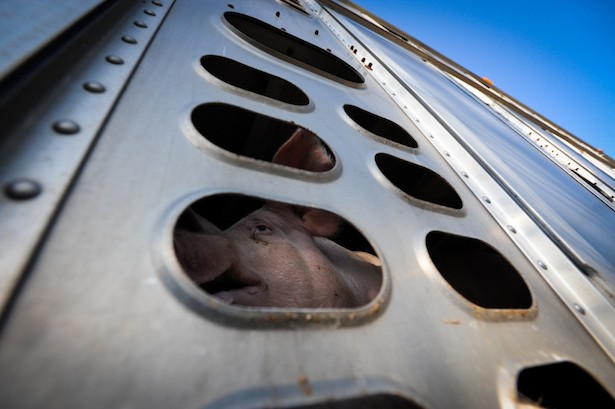 What are some ways we can help with international problems?

We can watch and learn and speak up. We can volunteer abroad and at home. We can donate and help fundraise for organizations doing good work. We can boycott the sorts of things we do as tourists when we travel, like going to bull fights, riding on the back of elephants or swimming with dolphins.

Explain photography as a tool for activism.

I love that line from an Ani Difranco song – “Every tool is a weapon if you hold it right”.

Captain Paul Watson, Founder of Sea Shepherd, said this of my work: “We Animals is an incredible photographic insight into the reality of not-so-kind humankind. I have always  maintained that the camera is the most powerful weapon ever invented and, in the hands of Jo-Anne McArthur, it has been truly devastating in exposing the terrible cruelties carried out in the name of research, agriculture and amusement.”

Purchase or learn more about We Animals on their website – We Animals site: www.weanimals.org

Love this photo by Toronto photographer Giulio Cosmo Calisse. A great capture of the crazy clouds we have been experiencing […]

“On Dupont Street” in Toronto by Julia Nathanson

Toronto photographer Jamie Hedworth sent us this great shot of a Blue Jay bird in Toronto. With the Blue Jays […]