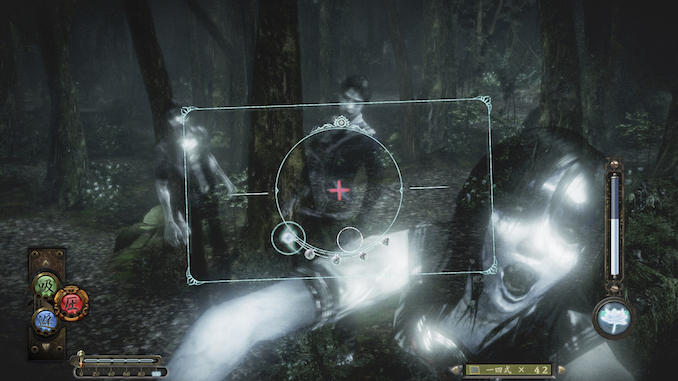 A remastered version of the least scariest, yet still scary, entry in the greatest survival horror series.

You, alone, late at night, in a room lit only by candles and the glistening eyes of a thousand porcelain dolls. 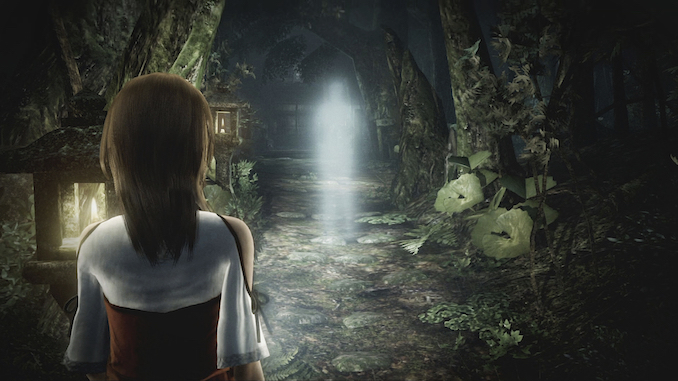 DARKNESS FALLS ACROSS THE LAND

The year was 2002, and my sister and I were playing Fatal Frame late one school night, well after bedtime. I paused for a bathroom break, leaving her alone with the PS2 controller and an admonition not to proceed without me. Returning to the room, I found her cowering in the corner, blankets pulled up tight. In my absence, a series of bloody handprints had manifested on top of the pause menu, as if some invisible spirit tried to claw its way out of the TV. It wasn’t Fatal Frame‘s best scare, but this terrifying breaking of the fourth wall was certainly one its most memorable.

The Fatal Frame (also known as Project Zero) series has for too long been the overlooked kid sibling to the Resident Evils and Silent Hills of the world. Long a cult classic, it also enjoys the distinct reputation, for those who’ve played it, of being the single scariest “survival horror” series of all time. If you’ve ever waded into Fatal Frame‘s murky, quasi-black-and-white waters, you’ll understand the sheer terror of its crumbling Japanese environs, creepy dolls, and unpredictable ghosts. It has one great central gimmick – a first-person “camera obscura” which is your only means of defence – and its arrival on next-gen systems is nothing short of a Halloween miracle. 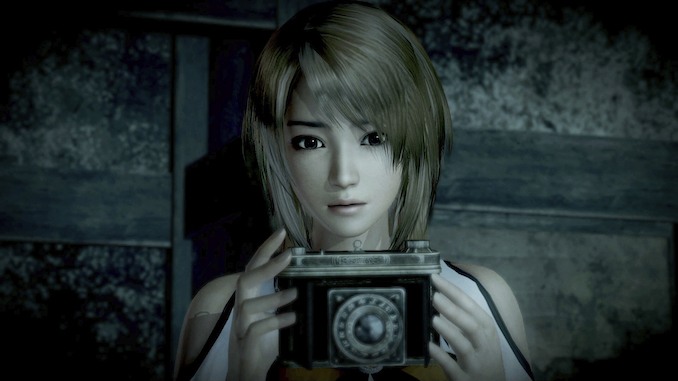 THE MIDNIGHT HOUR IS CLOSE AT HAND

Fatal Frame: Maiden of Black Water – technically, Fatal Frame 5, though the fourth entry never saw Western release – is probably the least scary Fatal Frame to date. By turns too generous with items – when you can survive almost anything, the survival part of “survival horror” goes out the window – and too linear – when you know exactly where you’re going, the tension dries up – it’s nevertheless a unique, Ringu-influenced horror experience that’s worth checking out. It’s still a heck of a lot scarier than most modern horror games – I’m looking at you, Resident Evil – but it’s no longer that game with the bloody handprints that spooked my sister all those years ago.

Like its predecessors, Black Water puts players in the shoes of a rotating cast of characters exploring a forgotten, Very Haunted, Japanese village. Things here don’t just go bump in the night; they ooze, and shriek, and claw at you through the walls. Characters include Yuri Kozukata, a local occultist who vibes “good witch”; Ren Hojo, an investigator hired to look into a missing person case; and Miu Hinasaki, a young woman who shares a last name with the protagonist of the first game. The legacy of that original Fatal Frame looms large over this one, not only through its at-times convoluted lore, but in the way its twenty-years-later plot mirrors the actual timespan since Fatal Frame debuted. As far as I can tell, this is one of the first video game series to more or less age in real time.

In terms of actual gameplay, it’s a third-person survival horror game, which means deliberately wonky controls, deliberately obscuring camera angles, and an emphasis on exploration and light puzzle-solving. The combat in Black Water is the same as it ever was: run around frantically in third-person, then draw the camera up in first-person to snap a photo and, hopefully, knock a vengeful spirit back a few paces. 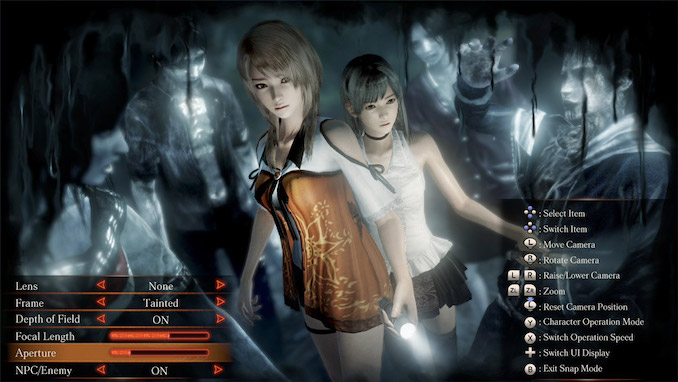 CREATURES CRAWL IN SEARCH OF BLOOD

Fatal Frame‘s most frightening aspect is the ghosts – the aggressive ones, with the health metres that must be whittled down via photography, but also the random ones. It’s the latter that generate the best scares: these spectres have a nasty habit of popping up when you least expect, especially when you think you’re safe. They’ll grab at your feet as you race across a bridge, or appear in a corner where moments ago there was only shadow. Fatal Frame‘s best moments have always been these – the ones that rely on atmosphere and well-deployed jump scares, as opposed to the frantic combat sequences that play out through the first-person lens of a camera.

The other striking thing about Fatal Frame is its desaturated look, players roaming through almost-black-and-white environments, dotted by the occasional blood red of a faded kimono or tatami mat. The series has long been one of light and shadow, with Black Water doing a great job of playing tricks of the eye. Was that a tree branch over there, trembling in the wind – or was it a disembodied hand?

Unlike past games, however, there’s very little in the way of actual wandering. Black Water always points you where to go – the correct hallway, the correct room – and there’s a map available at all times. Unfortunately, this too undercuts the frights, since a lot of the best Fatal Frame scares happen when you’re lost and scared. Here, because you always know where you’re going, you pretty much always know where the next ghost is waiting. It’s a phenomenon which has long been the blight of survival horror games, and which previous Fatal Frames largely avoided. To be fair, Black Water still works in some great surprises, but it’s far too predictable for my liking. 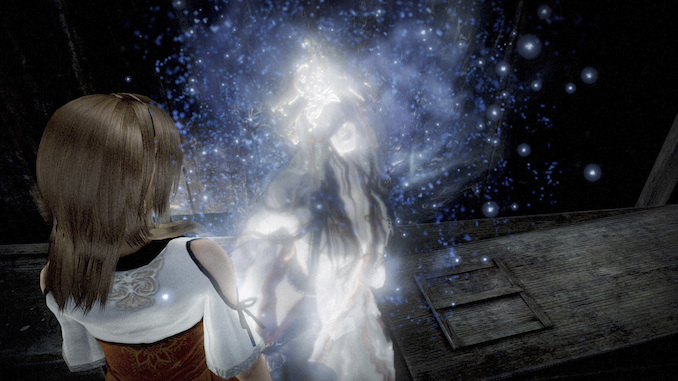 TO TERRORIZE YOUR NEIGHBOURHOOD

The original Black Water on Wii U was the definition of a gimmick game, with the Gamepad’s built-in screen serving as your camera lens. Although movement controlled traditionally, any time you wanted to take photos, you actually had to lift the Gamepad up in front of your face. It was a very cool gimmick, and I still remember the first time I discovered I could rotate the Gamepad vertically to take portrait photos.

Only the Switch version, in handheld mode, recreates that experience. Otherwise, players on a TV-connected Switch or next-gen console (I also tested the PS5) will have to be content with motion controls. Of the competing versions, the next-gen ultimately proves superior, if only because of the improved graphics and load times. That said, there’s something amusing about the Switch release, which has you swinging the handheld around frantically, trying to capture a good camera angle. I can’t imagine what fellow bus passengers might make of it.

Otherwise, there’s very little in the way of changes to the remastered Black Water. Apart from a new Photo Mode, it looks, and plays, like a slightly smoother version of a Wii U game from 2014. The voice acting is still mediocre (these games really need a Japanese audio option), and the controls are still deliberately fiddly. It also remains disgustingly hypersexualized, with a wardrobe of revealing costumes that reduce otherwise well-written female characters to objects of desire. (Earlier Fatal Frames were partly guilty of this, but the plethora of skimpy outfits in this game is, for lack of a better word, horrific.)

Criticisms aside, Black Water is still scary as ever, telling the same story of creepy rituals and a hilariously excessive quantity of dolls that players experienced back in 2014. Really, it’s less remaster than it is a chance to finally play a game on a system that people actually own.

RIP Wii U; you may be gone, but your spirit lingers on…