Korean-Canadian filmmaker, Albert Shin, returns to the Toronto International Film Festival (TIFF) this year with a moving short film. In TOGETHER, two strangers who met online decide to meet in real life at a seaside motel and as the story unfolds there’s a powerful human connection that is intimately shared. 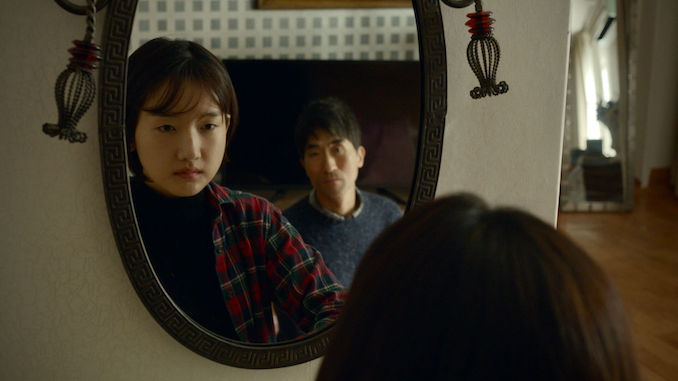 Ahn So Yo and Kim Jae-Rok are the two characters shown in the film. We don’t know who they are or what their story is but it doesn’t matter, they are here together for one reason — a suicide pact.

Shin tells us that Korea has one of the highest suicide rates in all developed countries and while he was working on his feature film IN HER PLACE, he had learned about this phenomenon. Internet suicide pacts are described as when strangers meet online and make a pact to end their lives together.

In TOGETHER, they only know each other by their online names and like a “fly on the wall” you see how their story unfolds. While the thought of subject matter is incredibly sad,  Shin poetically shows us through a compassionate lens that we are not alone even during what may seem like the darkest times.

The subject matter is quite heavy but Shin tells us that he wanted to tell the story that neither trivializes or marginalize the people involved but instead still make a film that is  life affirming.

The short film may feel like a quarantine film but much of it was shot a few years ago. The pandemic gave him time to finish it this year. “I sat on it for many reasons, it was a tough subject matter and it was based on a larger feature idea,” said Shin. “I think the simplicity scared me for some reason so it took a while for me to sort out where it ended up.”

The idea to leave out the details about the characters was intentional. Shin tells us that the less you knew about the people and their background stories the more is said about other things. The audience has no preconceived notions or have formed opinions about the two who have met to end their lives together. “It all stemmed from the idea that I didn’t want to cast any judgement on the characters,” said Shin. “Obviously, these two found themselves at this point. They’ve almost contrived a safe space for each other and themselves but also we get the sense that as humans we are looking for solidarity, assurance, and human connection. Which is relatable for many. But then we also think about how much are we responsible for other people as well? The fact that both of them make this decision one still had to start the process.”

Shin took those elements to tell the story and the subject matter beautifully, gracefully and respectfully. While it seemingly appears very simplistic he tells us that there was a lot of consideration and thought to show something meaningful. From a storytelling and filmmaking perspective he didn’t want to make it about just misery.

Is this suicide pact phenomenon only happening in Korea? Shin tells us in general, there is a repressed nature to the culture itself in Korea. “There are certain expectations and sort of a homogenous idea of what is success and what is failure. So, because of this, I think it adds a certain intangible pressure that people can’t reconcile in many ways. Mixed with the times we are living in and trying to connect with others — there’s no simple answer.”

Shin tells us that if someone were in Korea and tried to search up “suicide” on the internet they would immediately get blocked and receive a warning with information to call a suicide hotline.

“I think that feeling of wanting to connect is universal. To wrap it in this culture and world hopefully amplifies how similar everybody is when it comes down to it,” said Shin.

Working and releasing TOGETHER during the pandemic what challenges did he face?

“For me and my creative endeavours you know, the movie might not have been made if it wasn’t for the pandemic,” said Shin. “I wholeheartedly believe that. I haven’t made a short film in over ten years probably and it’s in a lot of ways “modest” but also in a lot of ways a lot harder to make in some respects. But I’m glad that during the pandemic I could take the time and think about the films I want to make going forward. I pride myself in making films in all sorts of genres and spectrums. I really try to keep myself on my toes so I’m not only mining the same arena and this one is close to my personal sensibilities as a filmmaker. I allowed my own creative compass lead me.   This film was very freeing and I just followed my instincts as to how I wanted to tell this story. Even if it was a small canvas it was nice to work in that kind of space. In a lot of ways it was very reaffirming to see it through.”

How does it feel to have yet another film have a world premiere at TIFF?

“For a short film it’s hard to find a better platform to bring it to the world. Hopefully people will see it and respond to it. It’s quietly ambitious,” said Shin.

It may seem simple and small but hopefully it leaves a lasting impression with the audiences.

We had to ask him what is his unforgettable TIFF moment. Aside from showing his own films, Shin tells us about the times when he was a student before becoming a filmmaker. He recalls when TIFF offered students free tickets and that was really incredible on a student budget.  “Or you could be in line and then meet someone who would then somehow randomly have an extra ticket and takes you to another film that you didn’t plan to see but turns out maybe it was suppose to be the film you were suppose to see. It was those kind of random moments that made the Film Festival experience so different than a normal movie theatre experience.”

Things To Do While Staying Warm this Winter in Toronto

Okay, if you’re not embracing the winter months especially after the festive joyous months and would rather cocoon and wallow […]