Fabled ballet dancer Mikhail Baryshnikov paused for a moment, searching his memory. He’d forgotten the name of the Toronto theatre where, in June 1974, he’d made his final Bolshoi performance before defecting to Canada. “O’Keefe Centre!” shouted someone in the audience, here for the opening of Baryshnikov’s Looking for the Dance photography exhibition at One Yonge Street. Baryshnikov smiled graciously and thanked the admirer, thanked Toronto, and thanked Canada for helping him gain his freedom nearly fifty years ago. 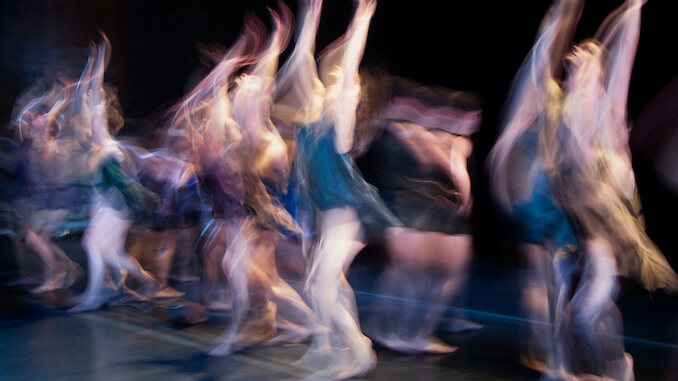 Baryshnikov was the most famous ballet dancer in the world when he defected, sending shockwaves through the art world and ruffling plenty of Cold War feathers. In the decades since, he’s maintained a special relationship with Canada, dancing with our National Ballet and revisiting Toronto for special performances. His new photography installation is a different sort of travelling show. Housed in the same building as the Immersive Van Gogh exhibit, the gallery of Baryshnikov’s photos showcases his love of dance.

For many years now, he has travelled the world taking artistic photos of everyone from trained professionals to amorous couples holding each other close in a nightclub. The photos are light, oversaturated, slightly out of focus. It’s as if Baryshnikov wants viewers to see the dancers in a constant state of movement, their bodies a blur of motion. The gallery is small, but socially-distanced visitors should enjoy the visit.

The audience for this is hard to predict: those who remember the glory days will enjoy seeing Baryshnikov’s dance-adjacent work in 2021. Young people less familiar with ballet may wonder what the fuss is all about, but with the Immersive Van Gogh next door they’ll at least have the chance to check out another insta-friendly exhibit.

Read more about Looking For the Dance at https://showoneproductions.ca/event/lookingforthedance