Zenia Marshall is an emerging Canadian independent alternative-pop singer-songwriter and a professional film/tv actress. She is best known for her works as one of the leads of the “Date My Dad” TV series alongside “7th Heaven’s” Barry Watson & Hollywood legend Raquel Welch, the movie “Summer of Dreams” supporting lead to and singing alongside 80s pop princess, Debbie Gibson, and as a recurring guest star on CW’s Supernatural. Although new as an original artist to the world of recording, Zenia is a stage vet having sung and toured worldwide in her mom’s internationally acclaimed Tina Turner Tribute show since the age of 13 and has since headlined in numerous musical runs, cover bands, theatre act shows, and as an Ariana Grande tribute artist herself. Just like in her acting, she approaches each song as a different character, style, genre, and story composed of deeply vulnerable introspective thoughts & emotions – hoping her songs can help one person out there feel connected with, seen, and safe. She co-produces each song to explore a lush landscape of silky vocals, dreamy guitars, and synths creating an abstract ethereal blend of dark tinged alternative indie pop. 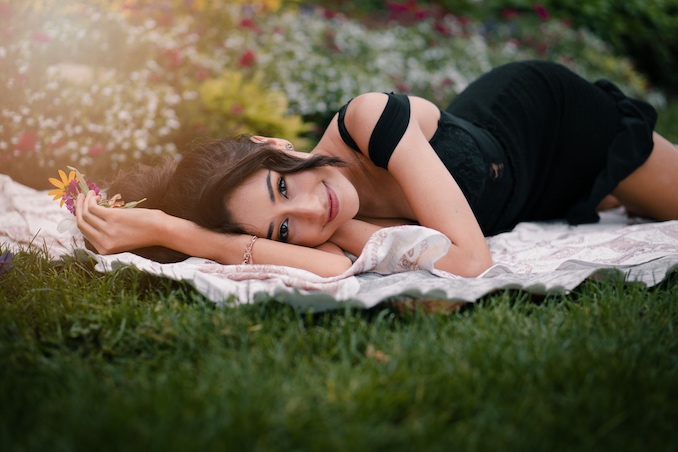 Founded: As an indie original artist? 2021! (but I’ve been working on my songs and music for a lot longer haha) 🙂

Latest Video: You can watch the music video for “Heaven and Hell”

I don’t think I’ve ever been able to be set on a fav band because I always cherry picked a song or two I loved from every band and artist for periods at a time 😂 But a few that pop to mind is Metric, U2, No Doubt, and M83! But just a few other musicians I’ve worshipped are Whitney Houston, Lauryn Hill, and Mariah Carey.

You Make My Dreams Come True – Hall & Oates and Holding Out For A Hero – Bonnie Tyler (Although they’re such classics – I don’t think it’s thaaat much of a guilty pleasure!)

I feel like this is gonna sound boring but here we go! Vocal straw exercises, stretching, just about enough fooood (not too much that I get drowsy), lots of water, really pumped up music, and a relaxing calm (very lengthy) makeup/hair routine for the show to centre myself (it’s really calming…until you can’t get your eyelashes on properly 😂). The after show routine is even better because I gobble up as much food as I want and get to slip out of those high heels and into fluffy slippers haha!

Ooooh depends on the songs… usually LP but if the vibes are right. I like listening to LP’s more myself. But for the creative journey in production and painting a story through even more studio elements – I’d pick EP!

Most DEFINITELY Night owl. I simply shouldn’t share how badly of a night owl I am! 🦉

Gahhh this is hard!! I love being on tour for the performances itself but I’m such a homebody so I don’t like to be nomadic for tooo long haha! Gotta pick the studiooo. Nothing can beat the energy and adrenaline of a live performance but Studio for the production creativity and writing!

Currently, I just released my new single “Heaven and Hell” and will be releasing my music video for it on Feb 26th/2021 so please make sure to check that out! Stay tuned for more music this year!

Mauve is Toronto’s up and coming pop songstress who has an eclectic and playful sound that touches your soul. Mauve […]