The annual Audi Innovation Speaker Series went virtual this year and right out of the gate was a truly inspiring conversation with Toronto Raptors’ President and Giants of Africa not-for-profit organization founder, Masai Ujiri. Hosted by CBC Television’s Dwight Drummond, this talk offers viewers a glimpse into where Ujiri was first inspired to play basketball right through how Covid19 has affected tough decisions in the game. The talk was pre-recorded in-studio and now available for viewing on Audi Canada’s social media channels. 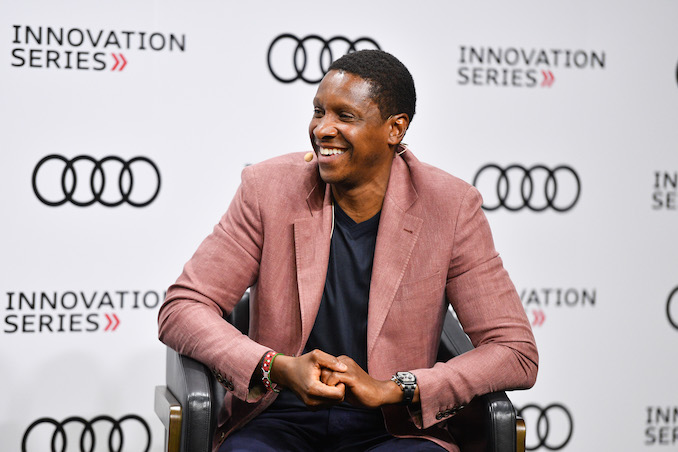 Within the 20 minute discussion, Masai Ujiri shared personal moments growing up in Africa with his two professional parents. He explains that originally he thought of soccer as his sport as the game came naturally to most African kids. “We come out of the womb and start playing,” Ujiri laughed. But as a kid, he had to walk past the basketball courts to get to the soccer field. He explained that each time he and his teammates passed through, they had to shoot a few hoops. Eventually, he spent more time with basketball than soccer. He really thought the NBA was a pipedream.

What his experiences have taught him has shaped not only his management style but his character overall. When he was asked about what innovation meant to him, Ujiri mentioned that he strongly believed that hiring smart people was important. “I’d hire people smarter than me,” said Ujiri. “You have to.” He also mentioned that he believes in also hiring with intention and being deliberate in what you do. An example he noted was when he started with the Raptors there was only one female working with the team and now there’s 14. He firmly believes it’s important to include the voices of women, young girls, and youth in order to move forward. He’s not afraid of doing things differently, or trying, and having the vision in order to create change.

That vision also is paired with his winning mentality and he won’t stop at one championship. When he was asked about his proudest achievement, Ujiri says it was seeing how people were affected by the Raptors’ win last year. “Seeing the appreciation of people and the love –and to see our players and our coaches deliver our dream for everyone,” said Ujiri. Yes, we can agree, that was a pretty amazing moment in our city’s history.

Ujiri is also a passionate activist. As the founder of Giants of Africa, he believes strongly that giving is an obligation. Basketball has given him a platform to help be the voice for those who don’t have the opportunities to be heard. He mentioned that Nelson Mandela has been a great inspiration to him. “Imagine if we had him at this time?”

Circling back to the meaning of innovation, and what the speaker series is about,  Ujiri said, “innovation is being different. It teaches people that you’re going to make tough decisions and you have to believe in yourself. Sometimes it works and sometimes it doesn’t at the end of the day you have to live with your decisions.”

At the end of the day Ujiri boils things down to his basic and fundamental beliefs. “My dad use to say, be good to people, be honest, and you have to find trust.”

A worthy watch and the motivation needed to make positive changes moving forward.

Here’s the link to Masai Ujiri’s talk, you can also subscribe to upcoming speakers in the series…

About Sonya Davidson 714 Articles
Born and raised in Toronto, this city girl covers the latest in arts, culture, food, and style. She also shares interesting stories about Toronto's people, places, and things. Follow @theculturepearl on Instagram and Twitter.
Twitter

It’s a Jurassic World, and we’re just living in it

Toronto Raptors star player Kawhi Leonard is scheduled to enter the free agent market on July 1st, 2019. Since it […]

Although the world lost iconic public figures in 2016, most notably Muhammad Ali, and will be remembered as the year […]