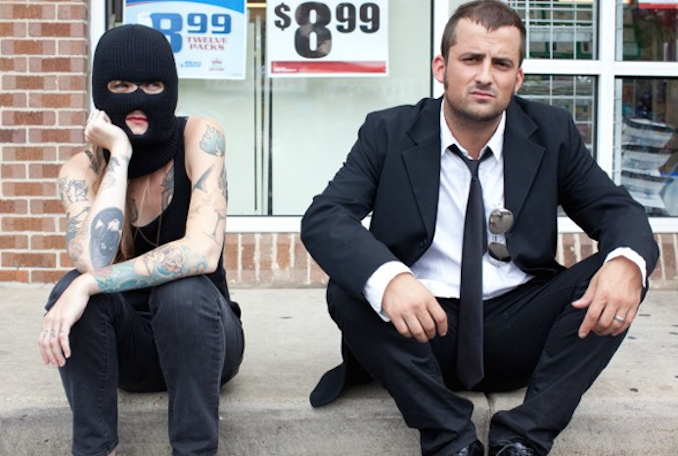 Chicago’s Brendan Kelly, best known for his work with the punk-esque Lawrence Arms, The Falcon, and his latest rambling project, The Wandering Birds, lands in Toronto twice this week: First, he hosts a folk-punk affair on Saturday night at the Bovine Sex Club (542 Queen St. W), playing solo alongside The Flatliners’ Chris Cresswell and the Organ Thieves’ Chuck Coles. The following day, Lawrence Arms performs at Fort York (100 Garrison Rd.) with Riot Fest, alongside with Andrew W.K., Fucked Up and The Descendents. Tickets for the latter, by the way, can be scooped up for free at King West’s Jimmy’s Coffee (107 Portland St.)—while supplies last.

You put out a I’d Rather Die than Live Forever with the Wandering Birds earlier this year, and it isn’t another old-punk-dude-gone-folk album or an album of children’s music. How important was it to you to subvert the expectations of a maturing dude in punk rock—the idea that, as you get older, you get into pompadours and country?

[Laughs] I had no agenda when that album was written, but when I saw it taking shape, I saw it wasn’t going to be punk or acoustic. I wanted to stay true to the songs. Part of that was trying to get as far away from [the punk formula] as possible—we used samples, drum machines, and different musicians. They weren’t punk; one dude’s a hippie, another dude, all he listens to is Ween. Punk rock’s my wheelhouse, but with those guys [performing on the record], it was eye-opening to see where some of my simple songs could go.

Still, you never actually know if your artistic output’s really good; I mean, you hear all these bands describe their albums, and they often get it all wrong. They say, “Oh, our album sounds like The Pixies and Elvis Costello.” And you,’re like, “No, this sounds like Blink-182.” So, I’m glad that when I put out my album, people said, “Hey, this is different than your other stuff!” I mean, I thought it was.

But I didn’t record the album saying, “I’m going to show everyone that I’m not like those turds.” I do feel a perverse sense of pride that it didn’t turn out [as a punk rock album], and I’m stoked people are talking about it in the way.

You share a label—and you’ll be sharing a stage—with Chris Cresswell from the Flatliners and Cavaliers, who we consider a local. Got any words on those guys?

I love that Cavalcade Record. It’s one of the records I actually listen to in the gym. I mean, I have a Canadian things—the only bands I really listen to are Propagandhi and Nomeansno. But those Flatliners records, they get some good play.

You’ve boycotted Warped Tours before, but you’re playing Riot Fest. Can you tell us about the fundamental difference between both festivals?

Well, the Warped Tour is the fucking Warped Tour. It’s a travelling circus. And I didn’t boycott it. It’s a misconception. The Warped Tour banned the Lawrence Arms. All I did was say that, during a show, that it was very hot, that people aren’t being treated nice, and water was really expensive. The bottom line wasn’t ensuring everyone had a good time, the bottom line was making a lot of money.

But that’s outdated now, especially with the hyperconnectivity of the world at large. When I was locking horns with the Warped Tour in like, 1999, there was a  small network of clubs… which were their own DIY infrastructure and economy. There were 15 or 16 sizeable tours that would hit these clubs, and touring bands could play 35 shows at these clubs in a year—that’s a summer tour. Then Warped Tour came along, and it was one show, one day, on these shitty crusty grounds, and smaller clubs and bands had to play against that tour. A lot of those clubs shut down.

Now with Facebook and Twitter, there’s a new way for infrastructure to thrive. Things are so personalized, that now, even tiny bands can get 20 people to show up to their show. It’s different now. As for Riot Fest, it’s put on by my friend Mike, who’s from Toronto. And it’s allowing a band like us to go to Tornoto now. [It wasn’t part of Kelly’s tour plan.]

And a festival date with the Descendents and Fucked Up, in 2012, isn’t really going to compete with a club show anyhow.

You’re pretty well a news commentator on your blog, so we’re going to cherrypick your thoughts on current issues. So, what did you think of Clinton’s Obama endorsement?

Clinton’s a great speaker. He was the president of the United States, and he’s a heavy hitter. He’s really charismatic, he’s a helluva dude, but he’s not going to appeal to the Christian right base. But like, the Tea Party-types, they wouldn’t vote for Barack Obama anyhow.

But Clinton’s a helluva public figure: he’s a centrist, and he’s well spoken. He’s very likeable. And I don’t think it can be overstated: If Bill Clinton wants you to like something, you’re gonna walk away liking it. Even the conservative pundits said it was a great speech. It really highlighted the flaws of the current administration, while promoting [the good it has done].

But, I mean, there’s so much crazy backroom stuff going on with the elections. It always comes down to, like, some indecisive hillbillies in Ohio or Florida. This rhetoric, at the end of the day [doesn’t matter], because the same batch of 20 dipshits [decide the election].

The entire Republican field of nominees was so laughably bizarre. You can look at Joe Biden and be like, “He didn’t do shit, and the one time he opened his mouth, he makes a poorly thought out slavery reference.”

But the quote that, “Osama is dead, GM is alive,” is one helluva headline. Why hasn’t that been trumpeted from rooftops for the last six months? That’s huge. In an election where the economy is the main issue, we have one candidate who revitalized an entire industry, and another whose fortune was predicated on firing people in huge groups.

[Laughs] But for sheer dumb dildo-dom, you gotta go with Perry, Cain and Santorum. Those guys are total mongoloids! When you’re looking at that field of assholes as opposition, Romney looks great! But he’s still a fucking asshole, and Paul Ryan’s a dingus, too. He shit on big labour in Wisconsin, and made all sorts of Draconian laws around organization.

And what of Jeff Foxworthy, Chuck Norris and even Nicki Minaj, who gave Romney their support?

I don’t give a fuck. But Chuck Norris and Jeff Foxworthy both have lawnmower haircuts and dumb mustaches with no chins, and they wear these shitty fucking jeans—they don’t get enough credit for being like each other. If you’re looking at those people as your political beacons in troubling times, it’s like, what’s wrong with you? If you’re looking to them, or Nicki fucking Minaj, to help you help you choose between a shitty plutocrat and a communist from Kenya, you don’t deserve to vote.

Cheif Keef made huge headlines yesterday, after the Chicago shooting of Lil JoJo. Being there, is the entire city wrapped up in that news?

The thing the world doesn’t understand is Chicago’s the most dangerous city in the world. It’s so segregated. I live on the white people side, and it’s safe—I could pass out tonight on my lawn with $100 bills taped to my face and make it through the night. A couple miles from here, it’s completely different. In the last month, 17 people were killed by gunfire. But I don’t know what happened with Chief Keef.

He was pretty nonchalant—mocking even—of the murder of Lil Jojo, who was his 18-year-old rival.

Chicago is dangerous. My friend did a documentary about AIDS in Malawi, and the movie and the darkest part people talked about death—they were totally nonchalant. That’s just they world they live in, [and it’s like that here]. Life is cheap in some places, and Chicago—and Chief Keef’s a Southside dude—is as dangerous as Kandahar.

Let’s not beat around the bush here, the Toronto music scene is currently on the cusp of something very special; its […]

What if we started restoring, creating and exploring the nature that exists in our own neighbourhood… What would happen? The David […]