This week we spoke to comedian, Andy Hull to find out more about his comedic style and where we can find him in Toronto! 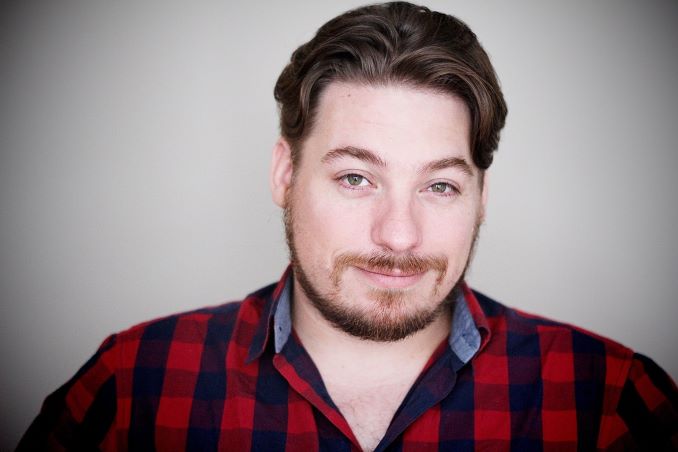 I think my style is a pretty boisterous mix of character based comedy with an affinity for roasts. Even though I basically never do stand up. Oh and jokes about food.

I’m influenced all the time by the people I perform with and my close friends, specifically my wife (who is a Second City Alumna) they’re all super funny and basically drive me to be a better performer. The fun you have hanging out with your friends will always be the best so I kinda try to bring a similar feeling to the stage when I’m doing comedy. Growing up though, my sense of humour was completely shaped by a combination of The Simpsons (seasons 1-8 only), Seinfeld and Late Night with Conan O’Brien.

My favourites growing up were Chris Farley, Mike Myers and Conan O’Brien. I also loved stand ups like Mitch Hedburg and Steven Wright.

I don’t see quite as much comedy as I used to (i have a fairly new baby) but Jim Gaffigan is always near the top of my list. I just love food jokes seriously. More locally though, I’ll see any show with Sarah Hillier in it, not because I’m married to her but because she is legit one of the funniest and easily one of the best improvisors in the entire country.

I don’t really have one, but if its a big show and I’m nervous at all, my old Drama teacher told me to always find a minute to be by yourself and focus on breathing and it’s worked every time! Thanks Gerry!

I got to perform at Roy Thompson Hall on New Years with the Sketchersons a while back, and its an incredible thing to hear waves of laughter hit you from that many people. But on the regular of course Second City is a really special place, as is my true comedy home, Comedy Bar.

Live comedy! Nothing beats getting out and seeing shows! Sunday Night Live, Catch 23 & Laugh Sabbath at Comedy Bar not to mention Second City are all havens for exceptional talent that may not be household names (YET)!

Always! Come see me the second Friday of every month at my musical parody show Weird Al Karaoke at Comedy Bar and Every Monday night I’m at Second City performing with the national touring company! Also if you like Magic the Gathering check out my podcast/youtube channel called The Commander’s Brew!

Devon Henderson (@devonhenderson) is a super funny comedian who just finished a run with her sketch duo Twoscon at the Toronto Sketch Comedy Festival. She is so smart and funny you will love anything you see her in, so go to the Bad Dog comedy theatre or Second City and catch any shows she is a part of. Do this especially if you like Harry Potter references or just the feeling of someone who is extremely well organized.

My favourite one of all time:

A mushroom walks into a bar and asks a woman at the bar on a date, the woman says no thanks pal. The mushroom says, why not, I’m a fun-gi? (fun guy? get it?)