Whyte Wyne and Young Riesling are nominated for a Canadian Screen Award for Best Web Program or Series for their show Ming’s Dynasty which follows two rappers who return to Riesling’s home in small-town Alberta to run the family business: a Chinese restaurant.

We caught up with the two comedians to find out more about what they do. 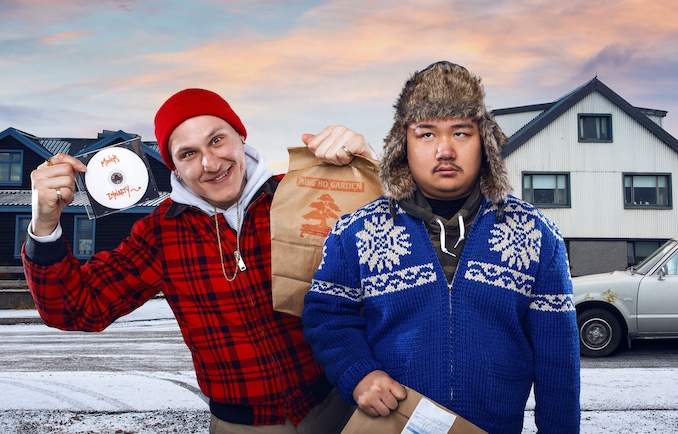 We grab some quick n’ dirty fast food, listen to some bangers from our favourite artists, crush a large glass of the cheapest house white, and hit the stage.

Our favorite set was at The Junction City Music Hall. It was our first show in a non-traditional comedy venue, and we were asked to open for our friend and music producer Matt Dailey. He had a bus full of family and friends come to Toronto from Brantford ON. It made for an especially rowdy and hilarious show.

Live shows are still hands down the best way to discover and experience new comedy, but Instagram and twitter are great short-form introductions to new talent outside of our local community

We have to shout out our friends and collaborators Notorious. They are a hip hop comedy and improv collective in Toronto and have a monthly show at Comedy Bar. If you are looking for an act to see in the Toronto Sketch Comedy Festival this year, we highly recommend our friend Anesti Danelis, who is an incredibly talented musical comedian, who famously quit his job at Starbucks.

A 42 Year Old Zamboni Driver walks into work, he is thrust into duty as an emergency goalie and proceeds to beat his employer 6-3. Go Leafs Go!

We’ve been nominated for 2 Canadian Screen Awards including Best Digital Series, and Best Supporting Actor for our digital series Ming’s Dynasty. You can watch all six episodes now on CBC GEM, and don’t miss us at the Toronto Sketch Comedy Festival. We are performing at the Theatre Centre Incubator March 8th and 11th.

Well, we know what Don Ferguson is doing for New Year’s Eve. The original founding member of Canada’s CBC-TV’s AIR […]

There are several types of families in our lives. Our immediate families we are raised in, our work or school […]

“A Day in the Life” with Toronto Actor Romaine Waite

What can I say, Romaine Waite has always been a character. As a little boy he would do things to […]