Stanley Cup winner and Team Canada Olympic Gold Medalist Patrick Sharp met with us this week while he was in Toronto to chat about the practice of billeting where families take in young hockey players who are living away from home, chasing their dreams with the help of the generous local host families.

Sharp announced a new partnership with Airbnb that includes a $25,000 donation to the GTHL Legacy Fund. The Greater Toronto Hockey League Legacy Fund helps families in financial need who cannot afford the costs of minor hockey participation for their children. It also assists organizations in funding hockey programs with a focus on child and community development.

Since finishing his career in Chicago, Patrick has been keeping busy with TV work. Locally doing stuff with the Blackhawks in Chicago where he lives with his family and working nationally with NBC.

We wanted to know a little bit about his experience with billeting and how this practice helps young athletes. 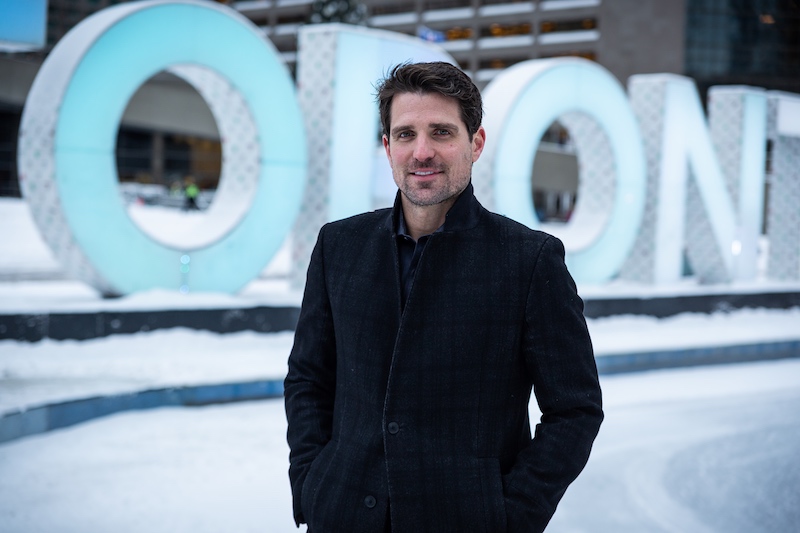 I want to talk a little bit about your experience with billeting. What was it like for you? When you were young did you experience this?

Patrick Sharp: I did.

At which stage of your career would you kind of start doing this?

Patrick Sharp: So I finished playing Bantam hockey at 15 years old, and Thunder Bay, Ontario is where I grew up, and I wanted to further my hockey career. I had a dream of playing in the NHL, and I thought Junior hockey was the next step for me.

So at 15 years old, I moved to Ottawa with my older brother and we lived with a new family. Our experience was great. It allowed us to play a year of Junior hockey in Ottawa, away from home, living with a new family. And really more than just the hockey side of it, we met lifelong friends, and have great memories, and people that we’re still in touch with today.

Is 16 is usually when billeting takes place?

Patrick Sharp: I would say 16, yeah. It’s scary to think about. I got two daughters at home that are 8 and 6, and to think that at 15 they might go off. I’m going to let them leave the house to chase their dream. But that’s kind of the connection between the billeting of these young players and Airbnb, really. It’s about opening your home and home sharing, helping these young kids further their dreams. So today is kind of like our Airbnb Billet Day, we’re going to donate $25,000 to the GTHL to kind of help these young kids continue their hockey journey.

And does this practice happen somewhat in the NHL, for a rookie?

Big time. We have a situation like that with the Chicago Blackhawks, actually. Kirby Dach, the young 18 year old third overall pick, he’s living with the Seabrooks in Chicago. It helps with the transition.

And “Seabs” is a guy that also did the billeting experience in Lethbridge when he was playing Junior hockey. It’s not unique to Canada, but Canadians certainly have a reputation for being great hosts and opening up their doors to not only hockey players, but people traveling as well.

So how do the finances work for billeting? Do you have to pay the people that are hosting you? Do they support you? How does that usually work?

Patrick Sharp: As far as the hockey billeting side of it goes, that’s always usually worked out with the team, and the team is looking locally for some great families that are willing to host some young players.

Now what are the financial restrictions? Are there sometimes some families that aren’t able to maybe go through this? Or are there any kind of financial struggles that somebody would face if they want to get into billeting or being a host?

Patrick Sharp: There’s always a financial support from the team locally, so it’s an opportunity to kind of house these kids. And basically, the point of being a great billet is to just be supportive and a second family for these young kids. It’s not easy moving away at a young age, and kids have to do it time and time again in order to chase their dreams.

And it is not just hockey. I remember staying at different families’ homes for baseball tournaments, and it’s a nice option besides just staying in a hotel downtown. It provides a local experience.

The Plus Minus: Justin Williams has a chance at all time greatness

These have been some of the most unpredictable playoffs in years. Justin Williams has a chance at all time greatness. […]

The Plus Minus: Pietrangelo has arrived and now everyone knows it

The St. Louis captain Alex Pietrangelo has been a quiet emerging star in the league for years now. These playoffs […]