Toronto’s own Andrea Buckett has worked with the Turkey Farmers of Canada this holiday season to develop a series of delectable dishes that are perfect for the whole family! Her Gingerbread Glazed Roasted Turkey with Gravy is a bold, beautiful and creative recipe that will leave guests in awe.

Find even more recipes that are perfect for entertaining and spreading holiday cheer at www.thinkturkey.ca! 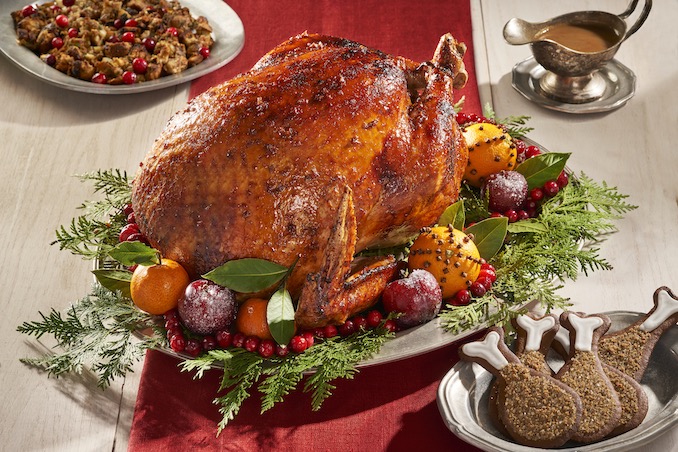 You will also need:

Step one: Make the stuffing

4. Stuff the cavity of your holiday turkey with ¾ of this delicious dressing, reserving the other ¼ for the upper end of the bird.

2. Lay the turkey on top of the vegetables, breast side up and tuck the wing tips under the turkey. Rub canola oil all over the turkey and season evenly with salt.

4. Meanwhile, get started on the glaze. Add the canola along with the shallot, ginger and garlic to a pot that’s set over medium heat. Cook for 3min until everything is soft and translucent. Add the remaining ingredients for the glaze and bring to a simmer. Simmer on low for 8min. Pour the glaze through a sieve, pushing the liquid through with the back of a spoon.

5. Insert a thermometer into the thickest part of the thigh (do not hit the bone). When the temperature reads 140F begin basting the turkey with the glaze every 10min.

6. Once the thermometer reads 165F remove the turkey from the oven. Cover the turkey and let it rest for 20min.

7. Prepare the gravy by pouring all the drippings from the turkey pan into a medium pot. Add the remainder of the glaze along with the apple cider, water, allspice, ginger and cinnamon. Bring to a simmer and cook for 4min.

Making the world delicious from Andrea Buckett’s kitchen to yours!

Todays recipe comes from Andrea Buckett who’s goal is to simply get you in the kitchen! “To live well, you […]

This week, Chef Devan Rajkumar shared with us this Black Bean And Mango Salsa recipe for us to try at […]