Greek Mythology was something that we learned in elementary school. It was fuel for dreams and nightmares.  I remember as kids we would associate with a God or Goddess on the playground and we would create our own Pandora’s box full of surprises. I always wanted to be Medusa with her hair of serpents and the power to turn you into stone if you looked into her eyes. Guess that says a lot about me?  Now with The Lightning Thief: Percy Jackson The Musical in town, it brought all that imagination back.

This stage adaptation, written by Joe Tracz, is based on the best-selling novels The Lightning Thief: Percy Jackson and the Olympians by Rick Riordan. It’s a story of a young teen who is on a surprising journey of self-discovery. Young Percy struggles with his identity and place in life. He’s misunderstood by teachers and school administrators which leads him to jumping from school to school. 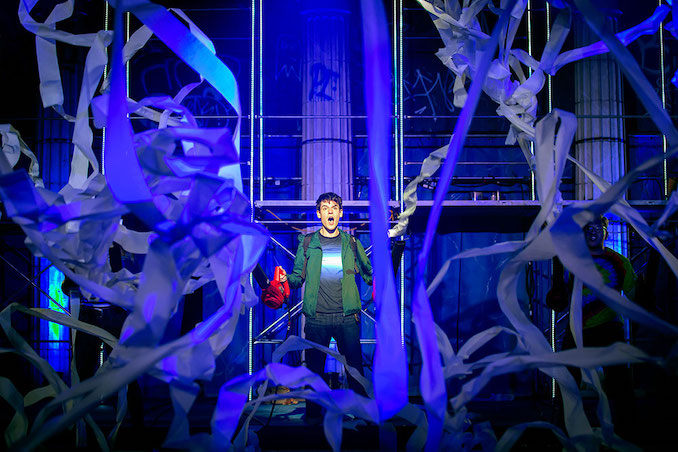 His home life is not so easy either. Sally  his mother is a kind lady who’s married to his “smelly” stepfather. Percy tolerates his stepfather for his mother’s sake and doesn’t know anything about his biological father – who’s actually a Greek God.

On a school trip to the museum his math teacher transforms into a strange creature and somehow Percy manages to  ward off the attack using a sword. Of course, everyone thinks he’s got a wild imagination – and that math teacher? She didn’t even exist. Once again, his shenanigans meant he would be expelled. Frustrated and confused, Percy so desperately wishes people would understand that he’s a good kid with good intentions and hopes that he’s good enough for someone.

Percy’s mother decides  time for him to go off to camp for the summer with kids that he can relate to. Camp Half-Blood is where he discovers, like the other kids, he’s not all human – he’s half mortal and half God. But who is his father?

The demigod kids in the camp include offspring of Hades, Athena, Harpies, Hercules, Hermes, Medusa, Kronos, Pan and others. The kids must face the reality about their “God” parents good or otherwise. 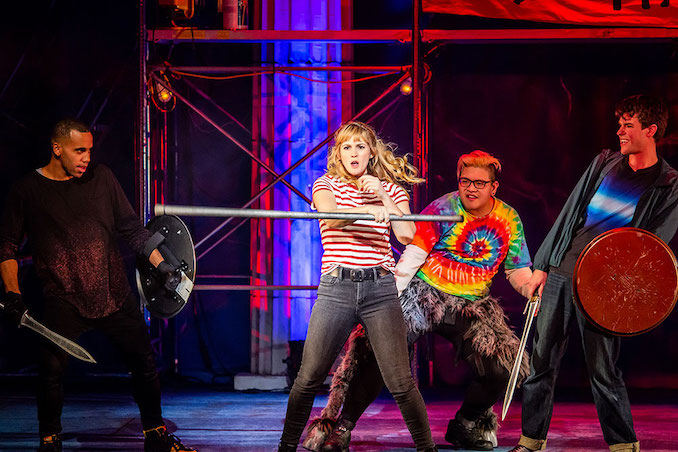 When Percy finds out he’s the son of Poseidon he’s also has being given the quest (the highest honour a half- blood can hope for) to recover a stolen but very powerful lightning bolt– presumed to be have stolen by his godly father. Together with a few new friends, Annabeth, daughter of Athena (Kristen Stokes) and Grover, son of Pan (Jorrel Javier), they venture across the USA to the underworld. It is understood that there’s a possibility that they will risk never returning.

Together they come to realize that being different is something that should be embraced. We all have our strengths and this is was their opportunity to prove it.

Admittedly, we knew very little about the book series like most adults we spoke with but the creativity and brilliance of this cleverly woven story has triggered our curiosity to hit the library. Greek mythology never was more intriguing. Most of the kids in the audience seem to be familiar with the story like as we witnessed their reactions anticipating scenes. The fight with the Minotaur was enough to knock us off out of our seats.

The rock-musical is full of energy with a stellar cast. Chris McCarrell (Percy) played Percy Jackson in the 2017 Off-Broadway production of The Lightning Thief. Check his CV and you’ll also find he was on TV in Peter Pan Live, and Netflix series The OA amongst his healthy roster of roles. McCarrell plays the awkward teen convincingly and grows the strength in the character’s confidence throughout the storyline seamlessly. As a parent you’ll be cheering him on. Actually you’ll be cheering on all the lead teen characters as they reveal their godly powers.

The demigod kids are very strong and confident in their characters. Jorrel Javier’s (Grover, Mr. D) high energy leaves you breathless with consistent strength in his delivery. Ryan Knowles (Chiron and others) has that stellar star quality that leaves you wanting more thanks to his naturally hysterical delivery. Jaylnn Steele (Sally and others) has the sweetest voice but can also belt out the best tunes as she swaps out the different roles she plays.

While the North American touring musical is here at the Ed Mirvish Theatre for a very limited engagement, it’s worth trying to nab some last minute tickets through Mirvish.com

BTW, pretty cool gadgets in this show too. You’ll see!

Down Low by Ernie Kwong

My first real spa experience was at the Elmwood Spa a long, long time ago.  I had just started working and […]