It’s time for the 44th annual Toronto International Film Festival 2019 (TIFF 2019) September 5 to 15, and we’ve made note of all the films we’d love to see. We’ve told our bosses that we’re planning to take a few days off and yes, we’re gonna take in the full TIFF experience. From celebrity spottings to where to pass the time in between screenings, and where to meet up with friends! We’ve got a few ideas on how to make the most of TIFF! 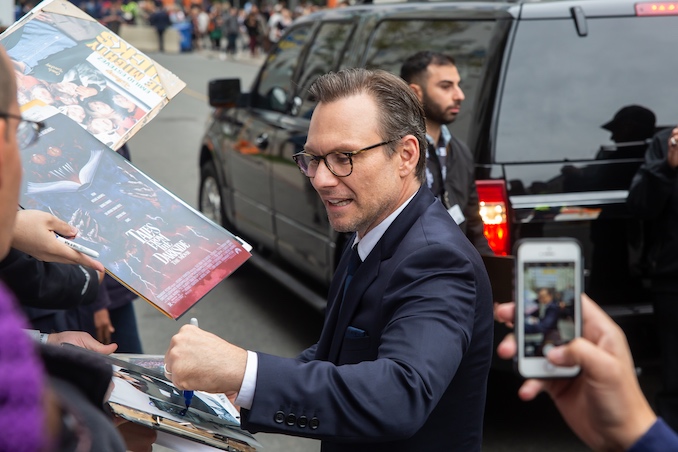 FOR THE NEWBIES: If you’ve never been “TIFFing” there are a few things you need to know about seeing the films.

Do your research and make your picks ahead of time.

Full schedule and line up of films are all at www.tiff.net.

Purchase tickets online, or at the box office, ahead of time to avoid disappointment.

Going to see a movie during TIFF is unlike going to see a regular movie. Pricing is different depending on the screening – Special Presentations and Galas often will have tiered pricing.

Some presentations will have organized seating and others are general.

With your ticket in hand you should get to your theatre at least an hour ahead of screenings and look for the designated line up.

If you were also hoping to catch the celebrities on the red carpet at the premieres best to save that for a film you aren’t seeing as the stars stream into the theatres just before the films. You’ll end up losing your place in line.

Many of the premieres (or first screenings and sometimes even second screenings) will also offer up a Q&A after the film — often with directors, producers and actors present. But if you really want to see a film and not necessarily the filmmakers or stars, then check for additional screenings. There are better chances of scoring tickets too.

Pro Tip: There are some Rush Tickets available but make sure you have cash in hand ($5, $10, $20). Sorry, no discounted offers for these extremely last minute tickets. If you love surprises and are flexible, then go to Scotiabank Theatre as there are usually multiple screenings happening at once, so you have a greater chance of getting a rush seat to something, anything —  Oh, and be sure to thank the volunteers. They are working hard at making the Festival run smoothly.

WHERE TO SPOT THE CELEBRITIES:

The Red Carpet at the major gala locations like Roy Thomson Hall, Princess of Wales Theatre, and TIFF Bell Lightbox are sure bets on catching an eye full of celebrities.

Head down at least an hour before a gala screening and have your camera ready.

At all hours of the day and into the evening, there are oodles of press conferences and cast parties happening in the downtown core. You can catch many of them going in and out of restaurants, hotels and locations like the OLG feature panels at Malaparte (TIFF Bell Lightbox).

We’d also suggest keeping your eye on The Broadview Hotel.

Byblos during the day will host the Nespresso with Creator Panels with a number of celebrities going through.

Mongrel House (Queen St. West and University) is where the Canadian independent film distributor will host its 5th year of parties. The historical building is a multi-level party central with live music food and drink for cast parties. You can catch celebrities coming in and out of here at night.

The pedestrian-friendly spills out of the TIFF Bell Lightbox and onto  King Street West  September 5 to 8. Located just outside of TIFF central find lots of activities, food samples, contests and experiences as well as live music and free screenings during the first weekend of the Festival. Restaurants patios in the area are perfect for taking in the night of stargazing. Festival Street shuts down King Street West from Simcoe Street to almost Spadina Avenue. Some of the fun includes…

Air France TIFF Lounge: Experience a taste of business class with this VIP experience that includes complimentary refreshments including French pastries! Visitors to this lounge will also have a chance to win round trip tickets to France in business class.

Nespresso Mobile Cafe: located at David Pecault Square. Who doesn’t love free coffee? This mobile cafe offers up complimentary coffee to keep fueled while waiting for the movies to start but not just that! They also have an epic viewing area overlooking the festival – great for celebrity spotting and people watching.

L’Oreal Iconic Beauty Bar: located at David Pecault Square. The brand has partnered with ModiFace, an internationally recognized AR and AI company to offer festival goers five unique and empowering looks to fit their individuality. Guests can virtually try on their looks including “Unstoppable”, “Fearless”. The company is encouraging women to celebrate and embrace their leading role.

RBC Red Carpet Gallery: If you really want to see some of the stars on the Red Carpet heading into Roy Thompson Hall, then nab your tickets in this very special viewing seated gallery. Tickets are free but must be reserved ahead of time. Book here.

Hudson’s Bay Refresh Lounge: Not on Festival street but closer to the Elgin and Winter Garden theatres, Festival goers can take a moment to recharge and be inspired by the red carpet looks at the Queen Street store located on the third floor. The space will feature an on-site DJ, coffee sampling and a striped carpet-ready popcorn bar. Guests can also get a beauty touch up while watching the latest Festival trailers. The Bachelor star, Vanessa Grimaldi will be at a meet & greet at the lounge’s opening on September 4.

With bars being allowed to serve until 4:00 am in the core, you can be sure to stumble into somewhere during TIFF. We suggest checking ahead of time as to specific dates of your favourite hotspot. Here are a few nearby…

Shangri-La Hotel: Always a great spot for late night cocktails after a screening. Park yourself at one of their cozy tables at the Lobby Bar and order up one of their TIFF inspired cocktails. Live music happens often here. Stay late and you never know who will show up. If you’re feeling flushed with money, or just want a real conversation starter,  The Director’s Cut cocktail is a whopping head-turner at $600. Made with Rémy Martin Louis XIII Cognac, champagne and a hint of lemon juice. It’s served in a fine red Baccarat crystal  glass that’s free-blown with its red colour created by the fusion of gold particles in the glass. Guests who order this cocktail will enjoy the stunning stemware, as a keepsake. Too rich? Head Bartender Chris Rail has created four other cocktails for TIFF worth exploring.

Mister C at Bisha Hotel: (80 Blue Jays Way) behind the plush velvet curtains is this sophisticated bar that is perfect for escaping late into the crazy nights of TIFF. Sophisticated and ultra sexy bar also offers up Happy Hour offering daily and  DJs late night not just during TIFF.

Regulars Bar: (668 King Street West) just down the street from the TIFF Bell Lighbox and only opened a year ago, this has become a go-to for celebrities, athletes and musicians.  Spotted recently? Snoop Dogg, Drake, and Shawn Mendes just to name a few. Not only is it a great space to hang out until the wee hours of the morning (bar is open till 4 am during TIFF) but they also has special programming everyday (hello Wine Wednesdays and Lost Craft Beer Thursdays!) of the week and DJs from 10 pm onwards.

Victor Restaurant: (30 Mercer Street) Located in the sophisticated Germain Hotel just steps away from TIFF central, Victor offers up comfort food with a modern touch. Great for a pre-show dinner. In full film festival spirit, order up the Buttered Popcorn Old Fashioned, a sweet twist on a beloved classic cocktail served with a side of popcorn of course. Created by head bartender Albert Chan exclusively to celebrate TIFF.

Northern Maverick Brewing Co: (115 Bathurst Street) This relaxed 400 seat restaurant is places a huge emphasis on everything local. A great spot to meet up with friends before and after screenings. Head bartender Liam DeBoer creates The Curtain Call cocktail that is a balance of warmth and sweetness. The richness of this limited edition cocktail will might just make you feel like you’re in “La La Land”.

Need more ideas? Visit our Local’s Guide On Where To Eat During TIFF.

We’ve been keeping an eye on what’s happening down at Toronto’s Union Station. The transformation is creating the area into […]