Welcome to the 21st century of health and wellbeing. That’s the introduction to Soul 7 Mindful Healing Technologies wellness spa located in Yorkville. I’m not actually sure if officially a “wellness spa” is what it’s called but probably the best description. Their belief is that every person has the ability to heal. Their mission is to help people heal naturally and faster by combining ancient healing wisdom with new technology. 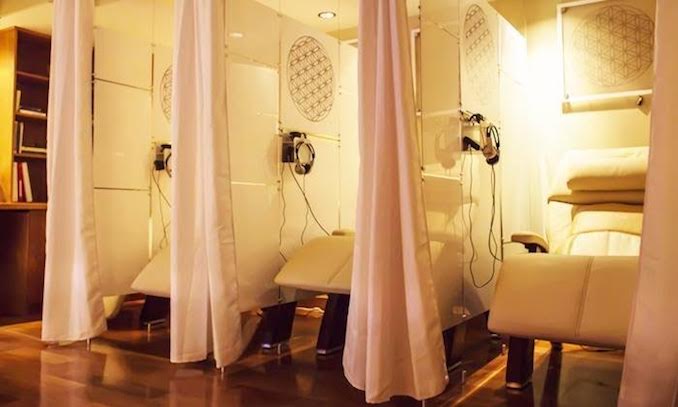 We’re use to going to spas that incorporate ancient therapies. Wraps, stones, cups, scrubs, scrapes, aromatherapy, salt, we tried many. Soul 7 is different from traditional spas.  This place feels more like entering into another realm beyond our world rather than sounds of willows swaying and trickling streams of water to the background music of Enya, remember her?

Soul 7 uses frequency technologies to help achieve mind and body balance by using sound and light. From my understanding, the frequencies are those similar to what nature provides us. Only we wouldn’t get nature’s optimum healing gifts here in the city. Health Canada has approved the technology that’s based on scientific evidence and it’s been grabbing the attention of people interested in enhancing their well being. 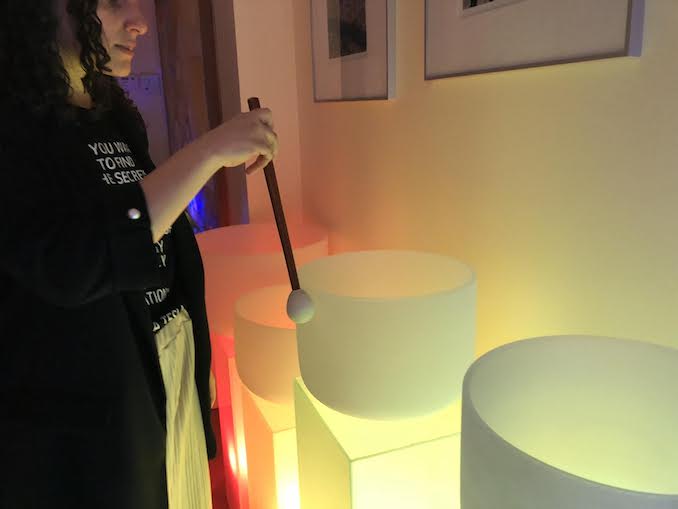 The concept began with Bob Berman’s quest for alternative therapies for his wife. He researched the world over to learn how our bodies have ability to potentially self-heal without the use of drugs in a non-evasive way. Through his search he learned about how light and sound therapy helps. He also learned that it was important to understand what is at the root of our health concerns and address them. He discovered technologies were widely used in countries such as Germany, Russia and China and researched how therapies including Pulsed Electro-Magnetic Frequency Technology worked. On the Soul 7 site, he explains that the mission here is to introduce people to their innate ability to self heal by addressing the root of the issues with the right tool and motivation to resolve energy blockages.

I had quickly glazed over their site before visiting. It’s not a spa where people lounge around in plush white terry bath robes but dressing comfortably is ideal. Treatments last about an hour long. But what does this therapy help with? Energy, immune boost, focus, sleep depression, detoxification, and more. There’s a general menu on the site that are the most popular needs and wants. I booked the Energy & Immune Boost treatment for the first go. 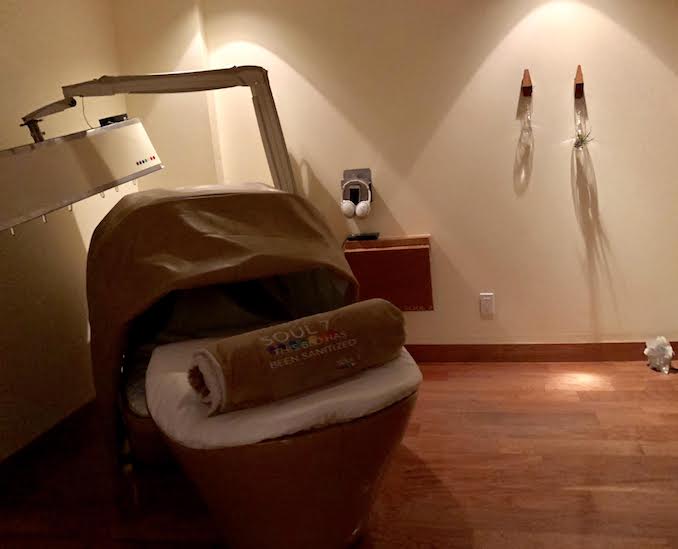 When I arrived it’s very peaceful as one would expect.  A light calming scent was in the air. I took a deep breath. A walk down the hallway and I passed by the softly lit meditation bowls (or also known as singing bowls). Soul 7 uses them commonly during their workshops. Rebecca, my therapist, gave them a swirl and  filled the hallway with a soothing hum.

There are several rooms and each one designed to focus on a specific treatments. There is one room that can accommodate several at one time. In one room,  sits a pod like chair  that cups your body and has a canopy that pulls over. I’ll be after that one next. The Energy & Immune Boost room includes a lie down table as well as a chair that is surrounded by coils. I was told these coils were created by the same people who have worked with Tesla. 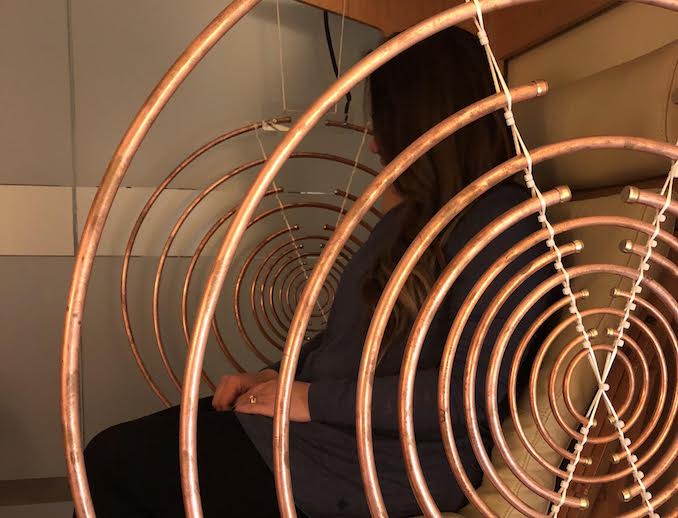 Rebecca placed a stone in each of my hands as I sat back and relaxed in the chair. The stones are meant to draw out any heavy energy and toxins that may be blocking good energy. As she left the room, she mentioned that this part of the session would last approximately 5 minutes. She gave me a heads up that the noise was all part of the treatment. What else would I notice?  Possibly I’ll feel a slight pulsation go through my body during this activity but some people don’t feel anything at all.

A few minutes in and I noticed  my hands were gradually feeling heavier and heavier. Was that because I had a lot of blockages or toxins in me? Ugh. I don’t know. That  pulsing feeling? Yes, I experienced that. It felt as though someone was giving me gentle hugs on each side. What I didn’t expect was a murmuring sound that seem to be coming from behind me. What I also didn’t expect was my Apple Watch to blip and beep. I quickly removed it from my wrist and placed it on the table beside me. So any skepticism of whether or not the frequencies are active in the room were now also put aside. 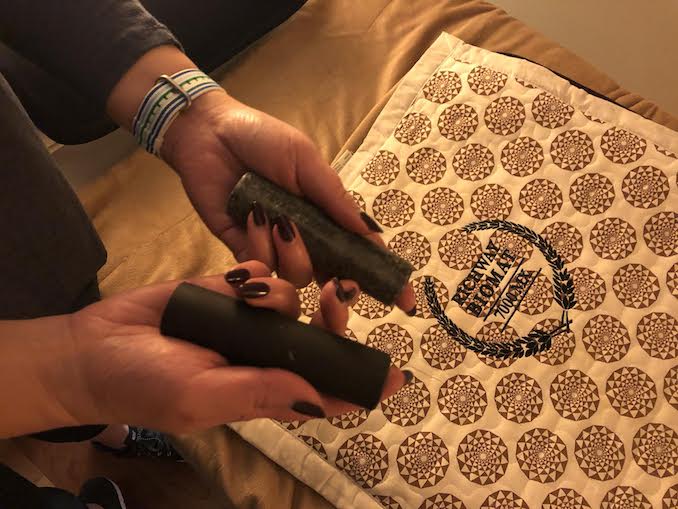 Rebecca returned to switch me over to the nap inducing part of the session. As I moved from chair to bed, I mentioned my watch going a little haywire and she mentioned that if she had seen it on me, she would have asked me to remove it.

We chatted about how we are often drawn to open spaces and retreats that are with nature when we want a break and to focus ground ourselves. We head to nature – to the mountains and to the seas. She explains that these are the places that we  are drawn to for self healing whether we realize it or not.

But we can’t escape to the woods when we necessarily need to. Weekend hikes can’t come soon enough or vacations are months away. Of course, no machine could replace nature’s draw completely.  Think of Soul 7 as a complementary alternative if you’re seeking that happy space in an easier and more accessible way in the city. 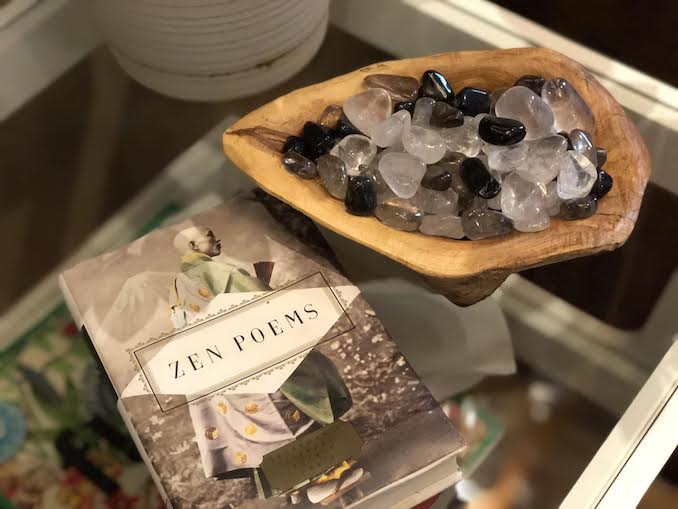 But who comes here?  Rebecca mentions that established and practicing yogis, people in the healing world, and those who are dealing with health issues are regulars. People who are curious, like me, are also coming for the experience.

So, when do people experience some sort of results? Rebecca told me that I will probably feel different after first treatment but to listen to my body. If I need a nap then do that. But isn’t this an energy boosting session I signed up for? Oh, yeah. She said that I’ll feel that too. But it was imperative that I drink lots of water.

As I entered into the second part of my session, Rebecca gives me a set of special light therapy glasses and earphones to put on. She walks me through what will happen next and how people often fall asleep during this portion. I happily did.

Two days after the treatment I didn’t feel that 3 pm slump like I usually do and so far I’ve been bypassing my late afternoon coffee sessions and craving naps for almost a week now.

I should also mention that prior to the treatment I asked her which treatment was best for this visit. I mentioned that recently I was feeling like I wanted to just shut down completely. I was feeling overwhelmed with just you know, being an adult. She did stick with the treatment I had requested but not sure if she adjusted anything based on my state of mind. But she did also mention that they offer a customized program to address specific needs.

The energy boost felt. I’ll be back.

Soul 7 is located at 17 Yorkville Avenue. You can learn more about their treatments and scientific support on their site at www.soul7.ca

Located on Avenue road, just south of Davenport in the Yorkville neighbourhood, Figures Restaurant is a comic book themed lounge […]

Home for the Holidays: Elmwood Spa’s welcoming retreat in the city