Love is impulse, love is resistance, love is beautiful and grotesque, love is both strength and weakness. Love was the four letter word on the lips of BoucharDanse throughout Histoire D’Amour, a flash in the pan performance at the Harbourfront Centre. 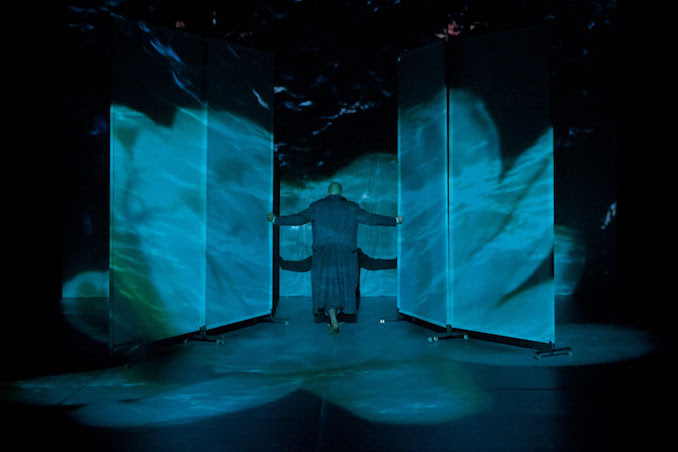 Created by Sylvie Bouchard and the award-winning Marie-Josée Chartier, Histoire D’Amour is a series of vignettes choreographed by a number of high profile Canadian artists showcasing love through the ages.

In a refreshing break from traditional dance performances, Histoire D’Amour is a multi disciplinary piece that uses projection and sound to augment the movement on stage. While  Ayelene Liberona and Matthew Maaskant’s visuals worked to provide an engaging backdrop to Bouchard and Brendan Wyatt’s movements, at times they became a focus of their own, bringing stimulating kinetic imagination to the forefront of the production.

Bouchard and Wyatt presented love through the ages, starting off tribal and impulsive, and moving through various eras of neurosis. Despite the different time periods of the pieces, it is surprising how much the essence of the pairs movement stayed the same. But then again, is it surprising? Hasn’t love always been the tie that binds us? We might speak different languages, live in different environments and wear different clothes, but doesn’t everyone know what a flutter to the chest feels like? Don’t we all understand the nausea that comes with caring?

Histoire D’Amour is not just a dance piece. Heavily peppered throughout each vignette were thoughts, fables and reflections from a narrator of sorts. This provided a change of pace and some moments of reflection as well as times of comic relief for the audience. I have to say that Vincent Leblanc-Beaudoin’s bravado was at times a little distracting. The overt style of acting was a touch at odds with the tenderness and sincerity of the movement. Nonetheless, the parables spun to the audience gave a welcome context to the vignettes. I especially enjoyed the tale of Love and Madness and the performance that followed.  What I would dispense with would be the overt breaks with the fourth wall; the MC style discussion with the audience. For me this wasn’t really necessary and I wonder if there would be a better way to build to the impressive moments of word triggered improvised movement?

Like in love, the moments of rawness and simplicity were the most stand out in the show. I enjoyed the digital aspects to the set, although it was refreshing when all of it was stripped away and all we were left with was exposed brick and bodies on stage. That’s the thing about relationships; at their core, it really is just two bodies sharing a space. We can theorize, we can discuss, we can write as many sonnets about it as we want, but no words we have in any language are better able to describe it…we really just have to feel it.

To find out more about Histoire D’Amour, visit the BoucharDanse website. To find out what is coming up at the Harbourfront Centre, check out their programme online.

Until last night I had not been to the Fleck Dance Theatre at the Harbourfront Centre. I can’t think of […]