Our review of Teenage Mutant Ninja Turtles : Shadows of the Past, a “sewer-crawler” board game published by IDW Games. Lead design by Kevin Wilson (Descent, Arkham Horror). 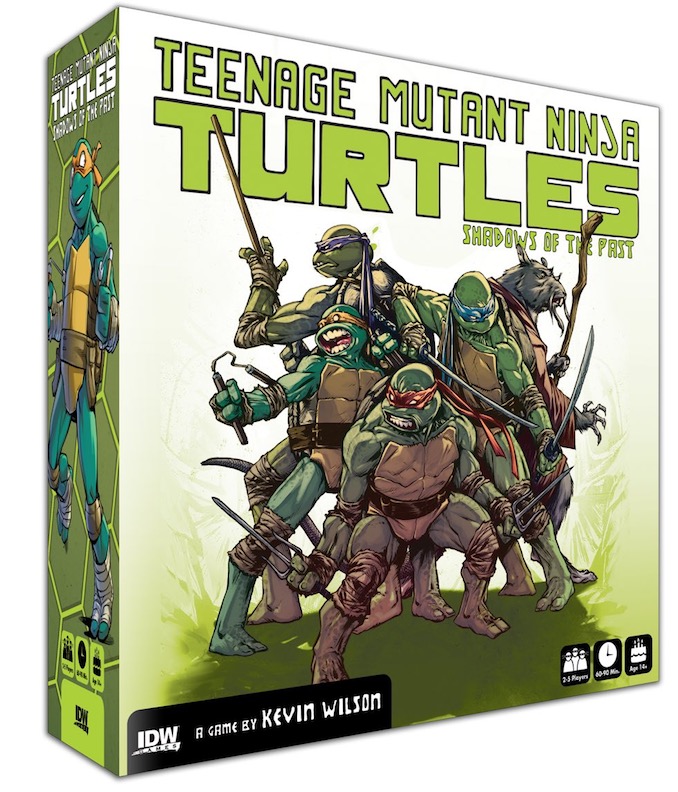 Surprisingly, not just those who appreciate a good Cowabunga. My fellow playtesters were non-Turtle nerds and they still enjoyed themselves.

The first thing you see upon opening the box for Teenage Mutant Ninja Turtles: Shadow of the Past is a comic book. Leonardo, Donatello, Michelangelo, and Raphael staring out at you, menacingly.

Not just because a Ninja Turtles comic is always a delight to read – even if this one takes place in IDW’s confusingly rebooted Turtlesverse – but because it shows respect for the licence. The people who made this game love their Turtles, and they want to share that love.

TMNT:SotP is a scenario-driven miniatures game. As in the better-known Star Wars: Imperial Assault, you’re getting a massive box of detailed plastic figurines, double-sided game boards depicting city streets, rooftops, and (of course) sewers, and a story-driven campaign in which the outcome of each session directs where the story – and players – go next.

At first blush, this is complicated. 15 action dice. Another 8 battle dice. Multiple decks of Villain cards, which change from mission to mission. Dozens of cardboard indicators showing fire escapes, parked cars, locked doors, and so on. Three different rule/guidebooks, two of which double as choose-your-own-adventure comics.

It takes a while to set up.

But once it gets up and running, things go rather smoothly.

Every game is a confrontation between four turtles and the forces of evil. Evil is always the responsibility of one player, who controls hordes of Foot ninjas, thugs, and even (gasp!) The Shredder. That single player goes up against anything from 1-4 players controlling the turtles, the ideal being a 1 vs. 4 experience.

The mechanics are fairly straightforward: game boards are divided into grids, with figures able to move a few squares at a time, initiating melee attacks when adjacent to a foe, ranged attacks at a distance. Action dice (for the Turtles) and Action cards (for the Villain) dictate the actions available each round. One round equals eight turns: turtle/villain/turtle/villain until every turtle has moved once, and the villain four times.

One thing SotP has in spades is theme. In gamer-speak, I’m talking about the various amusing ways that its mechanics reflect the source material. For example: Turtles deal extra damage and move faster when crossing a space with a handrail – because they’re grinding on skateboards, obviously. Special moves lean into individual personalities: Raph’s “Burning Rage” lets him unload a flurry of attacks at one go; Leonardo, ever the heroic leader, can “Hold Off!” an enemy figure in a battle that doesn’t end until one of them dies. You get the idea.

Undoubtedly the neatest trick is the ability to share actions with teammates. Every round, you’re able to share one action die with each player sitting next to you, and they with you. It’s a neat way to signify the idea of turtles-as-team.

RAPHAEL IS COOL BUT RUDE

The one exception is Raphael, of course: while other players can borrow from him, he’s such a loner that he refuses to ask for help. (Though he does get extra dice instead.)

There are plenty of cute little details like that. Nods to the franchise that will be familiar to anyone who grew up on the comics, original cartoon, 90s movies, or even (god help them) the Michael Bay travesties. This game just oozes Turtles, right down to the fact that your life metre takes the form of an ever-decreasing pizza. Once you’re down to one slice, you’re in big trouble.

That said, it’s definitely not for everyone. Miniatures games can get pretty fiddly, slowing down while players triple-check how to calculate damage, move through special terrain, and so on. Strategy is a whole other question, one I’m still not entirely clear on. At least one of our matches devolved into a lopsided massacre because the Turtles didn’t meticulously plan their line of attack. To make matters more complicated, the objectives tend to shift drastically from mission to mission, meaning that you may learn a mechanic only to abandon it the very next mission. Still, as a narrative choice, it’s pretty cool to have a new mechanic every game.

MICHELANGELO IS A PARTY DUDE

If you didn’t gasp earlier at the invocation of Shredder(!), this game might not be for you. Let’s face it: this is fundamentally a very silly licence, relying on the goodwill of gamers – primarily adults, if the $860,000 Kickstarter is anything to go by – and a willingness to embrace the theme.

It helps to remember that the Turtles were created as an affectionate parody of grim-dark comic books like Daredevil. (Foot/Hand; get it?) If you grew up on the Turtles and feel ridiculous playing a board game starring them now, just know that you’re supposed to feel that way. Even the self-seriousness of the scenarios, which play out in comic panels alongside the instructions for each mission, are knowingly self-serious.

At least, I hope so. Either way, it’s fun. And there really is a story here, a branching one at that, meaning that once you’ve started, you’ll want to finish at least one campaign.

Visit the official website for TMNT: Shadows of the Past here.

Our review of the board game Lifeform. Designed By: Mark Chaplin & Toby Farrands. Produced By: Hall or Nothing Productions. […]