There are many reasons people want to go out and take in a movie or theatre. Sometimes we want to be entertained. There are the days you just need a break from everyday and want something that is pure fluff. That’s okay in my books. We don’t always need, or want, to be intellectually or emotionally challenged. But there are definitely days that I want to ignite some emotions. Nicolas Billon’s BUTCHER did just that.

The story opens with a mysterious old man (John Koensgen) who was dropped off at a Toronto police station on Christmas eve, wearing a foreign military uniform, and a Santa hat, with a meat hook dangling around his neck. Drunk? On drugs? Homeless? All the cop, Inspector Lamb (Tony Nappo)  wants to do is file the paperwork and get home to his wife and kids. A lawyer’s business card is found on the old man and he gets called in to help shed light on the situation. Hamilton (Andrew Musselman) a British chap is puzzled as to why the man has his business card. Elena, a translator (Miranda Calderon) is called in to help as it was soon discovered that the old man does not speak english. As they begin unravelling the truth behind this old man, they uncover a past that will never be forgotten and justice must be served.

One of the most unique elements in this play worth noting is the language spoken. It’s a familiar sounding one.  Turns out that Lavinian is a fully developed new language created by Dr. Christina Kramer and Dragon Obradovic, two University of Toronto linguists.

Where did this idea come from? Calderon tells us,  “I think it came in part form the writer’s, Nicolas Billon’s, desire to set the play in a fictional place so as not to make it too specific to any one country including a language in the play that no one in the audience can understand is also reflective of one of the play’s themes, which is the great difficulty we sometimes have understanding one another across cultures, backgrounds, experiences, etc.”

“In this case, I believe the two linguists used two or three Slavic languages as a reference for the vocabulary and grammar, and then altered things enough to make their inventive language, Lavinian, incomprehensible to anyone outside the world of the play,” said Calderon. You can read more about it here .

Was it hard for the actors to learn the language?  Calderon further added, as she explained to the audience after the show that since she spoke Spanish, it probably helped her learn Lavinian as the sounds are more similar than English. “When you study foreign language you think about grammar more, so I approached it that way. In some cases, I decided for myself what the structure of the sentence was. For certain words it was pretty clear but as long as it made sense to me. There are definitely some words that are repeated and are very clear to us what they mean.” 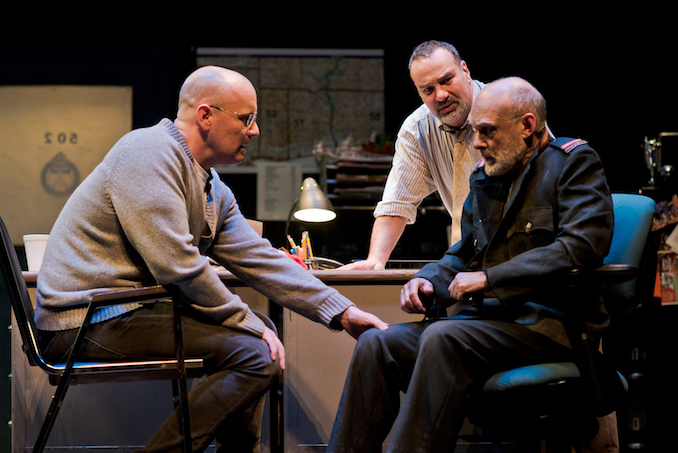 Speaking of the audience, the opportunity to stay after the show for the Q&A session is a real bonus. Definitely stay. We’ve have had the opportunity to sit through a few of these but for this particular performance of Butcher, they were riled… in a good way. It was refreshing to experience an audience filled with emotions and craving discussion.

There were a few mentions from the audience of feeling uncomfortable and disturbed by the story as well as how this adaptation changed interval scenes to provide more context. Nappo explained that the playwright was part of the process of including more graphic details but all was not done gratuitously and certainly not to make it a gorry show. “It’s a horrible play that exposes human nature and I’m glad it disturbs you,” said Nappo to which he received a rousing applause.

But we were curious as to how the storyline affects the actors themselves. “When we first performed this show in Calgary, it took me weeks to get over the darkness of the play, it was very disturbing, but I’m not normally like that,” said Koensgen. “I mean that as an actor I normally don’t get disturbed by my work but I have to say that being on stage for me is being in a reality and working with the other actors in the moment I forget that I’m acting. But usually after we finish, we sit around with a glass of wine. The play does take us places, and my experience being in it is that before doing it every night I have a moment of feeling daunted. We walk around with this stuff but for me, I think about the text. It’s an extraordinary piece and we as actors are along for the ride.”

Nappo finished off with asking the audience to think about how many times during the course of the day do we watch a tv show or the news and it’s often filled with violence. “We almost don’t notice it anymore. I think the strength of this play is that you sit through a murder and it affects you. There’s something to be said for a company that is willing to produce that kind of a play to remind people that you should not, not feel anything when a murder happens. We are exposed to this stuff everyday to the point where we can watch the news and eat our lunch at the same time.” said Nappo. That is disturbing.

Billon’s BUTCHER is a real thriller that starts on a funny note and then unleashes a pandora’s box of feelings that twists your gut inside out. Hold on to your seat, this is one hell of a roller coaster ride.

BUTCHER is now on stage until April 9, 2017 at the Panasonic Theatre. For more tickets and information visit mirvish.com.

Frank Warren Has A Few Surprising Secrets To Share On Stage

The internet has given so many people a place to voice themselves. The good, bad, and the ugly can, and […]

Interview with Deborah Hay of A Doll’s House Part 2

In the final scene of Ibsen’s 1879 groundbreaking masterwork, A Doll’s House, Nora makes the shocking decision to leave her […]