This is a new joke I’m working on, so bear with me here we go… “Canada’s Council for the Arts, under the Trudeau leadership, allocates a whopping $550 million new dollars to fund artistic endeavours in Canada….” OK so the setup needs work, but here’s the punchline – “$0 goes towards Canadian comedy. Not a single Loonie.” Seriously, that’s been killing backstage all week! 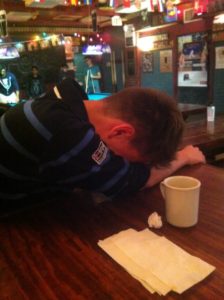 (Pictured: Me, Dean Young – in a state of disbelief)

I’ve been workshopping this new bit in green rooms and on Facebook pages, on radio shows and podcasts, and in a whirlwind of heated conversations in-person and online with an entire community of other perplexed comedians across Canada. It’s the kind of joke you just couldn’t write because, well, it’s 100% true.

In the same country that could easily claim Comedy as (arguably) our chief national export and a gross domestic product, our own brave new government has decided that Canadian Comedy somehow just can’t be considered ‘Art’. There just isn’t a box on the form with our industry’s name on it. Surely, someone in some back office somewhere in Ottawa must have made a simple mistake.

If there’s one thing Canadians have always struggled to define it’s our national identity. Our cultural imprint on the world around us has always been a little unclear and tricky to translate. Surely we’re so much more than beer commercials and Tim Hortons, and trite observations about the weather uttered during early morning hockey practices. We have so much more personality than Don Cherry’s suits and we’re so much more complex than the folksy songs of Stompin’ Tom (although don’t get me wrong – I do love me some Stompin’ Tom). Maybe our government wasn’t paying attention, because Canadian comedy has been clear on this all along.

We are the beer-swilling, self deprecating caricatures of pure Canadiana from Bob and Doug McKenzie all the way to the Trailer Park Boys. We are timelessly loveable oddballs like Ed Grimley and cult comedy classics like Meatballs. We’re the influence and impact of SCTV and early SNL (which our own Lorne Michaels created, in case you forgot). The absurd, breakthrough cast of Kids in the Hall who undoubtedly paved the way for an entire generation of ‘Alternative’ comics (that generation is still thriving and ever growing, every night onstage in comedy clubs and independent venues across Canada) We are raw and unfiltered and unappolagetically self-aware, from Fubar to Tom Green, to the sensationally stupid hijinks of Kenny vs. Spenny. The foul-mouthed commentary of Ed the Sock. The endearing East Coast sensibilities that gave us Codco and This Hour Has 22 Minutes and the Mercer Report. Sometimes we’re down to earth and easy to enjoy – strapping on Red Green’s suspenders every night or loitering around a gas station in Saskatchewan. When we aren’t crushing heads or stealing shopping carts, of course.

The Canadian comics who had no choice but to leave and seek greener pastures. Those iconic comics who eventually outgrew the pond, way back when. Standup success stories and names we love to name from Jim Carrey to Mike Myers, Norm McDonald to Russell Peters, and stoner comedy mega stars like Seth Rogen and Michael Cera (and countless others) we only claimed proudly as our own long after they left the nest. And how about our standups who stayed and helped build our industry (for better or worse) by hand? The ones who stayed home, stuck it out, and continue to fight the good fight? The comics we all watched growing up, in bite sized segments on endless Just for Laughs specials – Mike MacDonald, Ron James, Kenny Robinson, Jeremy Hotz, Mike Wilmot, Mary Walsh, Darren Frost – just to name a select few (and as we all know, there are many more)

Can we really turn on our TV today and see the burgeoning successes of Letterkenny, The Beaverton and the Baroness Von Sketch Show (among others) and still claim that comedy in Canada has no baring on who we are?

The fact is, comedy is ingrained deeply in our national fabric – so much so that we’re bursting at the seams with it (see what I did there?) We couldn’t separate ourselves from comedy if we tried. And why would we ever want to? But the sad fact is, we lack the resources and recognition and the fundamental support to sustain the talent we have here at home, long enough to maintain our audience. Let alone grow it. And the message we’re getting now from our new government is – “meh, it just doesn’t matter”.

When we, as Canadians, were faced with the prospect of a political climate that no longer reflected who we were and what we’re all about and that national identity crisis of ours finally reached critical mass – comedians were among the first ones to speak up. We lampooned, loudly. We satirized, we spoofed, we took the medium and the message into our own hands and we were unflinching. We threw our support behind a new leadership that (we hoped) we could see ourselves better represented by and more adequately reflected in. And right now, we’re being let down – in a big way. We lent our voice and our collective talents to usher in a change – and we reminded everyone watching (in case they forgot) that Canadian comedy packs a much more effective political punch than just chicken cannons and slide whistles.

There’s a groundswell happening RIGHT NOW in Canadian comedy. Independent producers, promoters, performers and content creators from coast to coast are utilizing every avenue and outlet available to us to create highly compelling and original content that represents who we are and accesses a broader audience here at home and (ultimately achievable, I believe) across the globe. In the digital age, Canadian comedy is expanding. We’re forcing ourselves to find new ways to reach our audience – carrying on in the long, proud tradition of our comedy. Our OTHER true national talent.

We need Prime Minister Justin Trudeau, our Heritage Minister Melanie Joly and Canada’s Council for the Arts to acknowledge that what we do is vital to that elusive Canadian identity. That it deserves to be invested in. It’s at the core of our culture. Comedy is such a huge part of who we are. And if we don’t have even the most base support or respect for this industry, we risk losing more and more of our talent. We stand to lose so much of what we’re working hard to build despite all the odds seemingly stacked against us. And that laundry list of names that we speak loudly and proudly only after they’ve all left – will just continue to grow. While the tireless talent right here in ‘Hollywood North’ will continue to struggle and fight to strive in (and find new ways to grow in spite of) a climate of isolation and obscurity. Despite our best efforts, despite this short list of names to know and countless other examples out there on stage, doing what we do best – every single night.

We’ve even cut it down to a simple hashtag that sums up this whole set list – #ComedyIsArt. It’s fun, easy to remember, and highly Tweetable at your Member of Parliament! This is our rallying call to demand recognition for comedy as a truly Canadian art form – and campaign for the support we sorely lack. Besides, you can’t even buy a Tim Hortons with $0, and Canadian comics spend a lot of time on the road.

This newly-formed Comedy Coalition has been brought to you by our friends at Too Far.TV, Inside Jokes on AM640, Talkhole Podcast Network, Toronto Comedy All-Stars and Canadian Comedy Award winner Sandra Battaglini who started this campaign with an open letter to Prime Minister Trudeau

“A Day in the Life” with Toronto artist Angela Kim

Born in South Korea, Angela Kim moved to Vancouver, BC at an early age and quickly found a passion for […]