When I met actor Varun Saranga at Bombay Street Food for our chat over chaat (sorry, I just had to work that in), he was already enjoying a cup of chai tea. When I arrived, we started to dive into the menu which contained some tempting descriptions and stunning accompanying images of the street food inspired items. 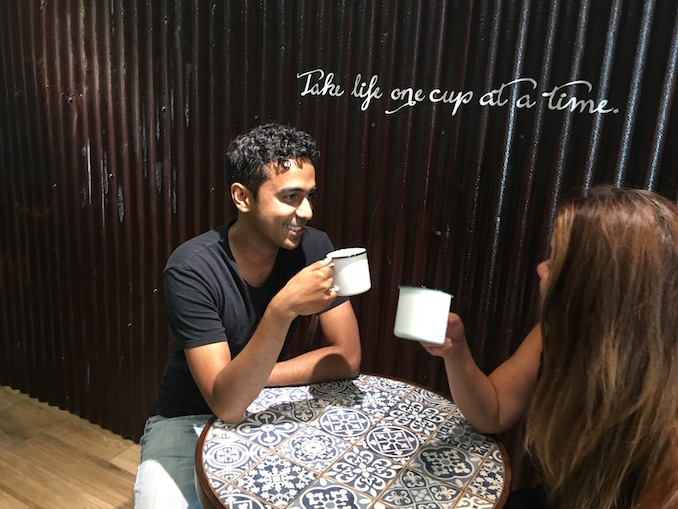 Co-owner and friend, Amreen, comes over and asks how hungry we were from a scale of 1 to 10. Varun says 11. Being a fan of spicy food, she suggests the gunpowder fries and the Chicken Frankie for him and the Salli Chicken Bowl with a side salad for me. Of course we had to order mango and sweet lassis before we began chatting about his shows, accolades, and more on food.

“So you can handle a lot of spice?” I asked Varun. He went on to explain how much he loves to eat and that spice is not a problem for him. He also mentioned that he had done some stalking on my social media posts and noticed that I often write about food as well as interviewing celebrities. It’s definitely something I’m trying to marry together because, if anything we all have to eat, right? 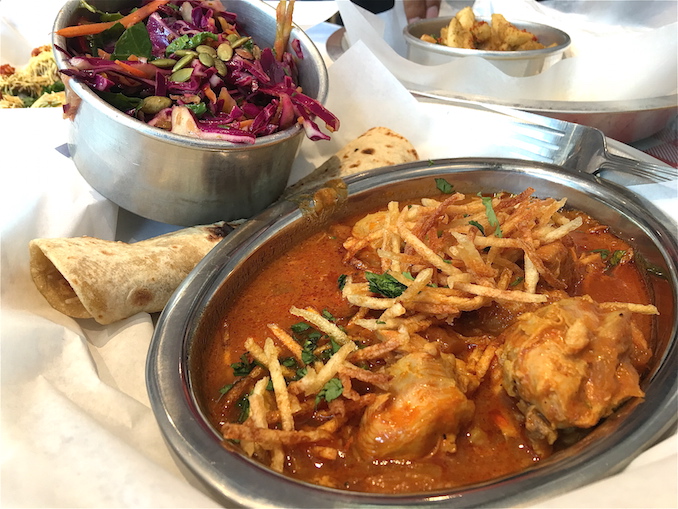 As Amreen drops off a tasting platter of Chaat and encourages us to eat before it all gets cold (she knows I can talk for a long time), Varun mentions Huang’s World (Vice) as being one of his favourite food shows. I had to ask him if he likes to cook as well. Varun mentioned a time that he was cooking with some very hot peppers and had an experience that he would never forget. “Did you rub your eyes? Cause I’ve done that. Rookie mistake.” I responded. “No, but I thought I had washed my hands after handling the pepper and well I had to go to…the washroom…and…” Okay, gotcha. And let’s just say I won’t look at another container of yoghurt without laughing from now on!

That was how our conversation began and I knew he was either perfectly comfortable with me or he was thinking “oh, shit, what did I just say?”

Varun Saranga is known for his funny roles on shows like How to Be Indie (YTV) and Schitt’s Creek (CBC), among others. Born and raised in Scarborough, he started to find interest in acting through filmmaking in high school.

His parents were like many who encouraged their kids to look towards traditional education and careers like law or medicine. His brother had heard of an open call for an acting job for a television series and told Varun to go and audition for fun. 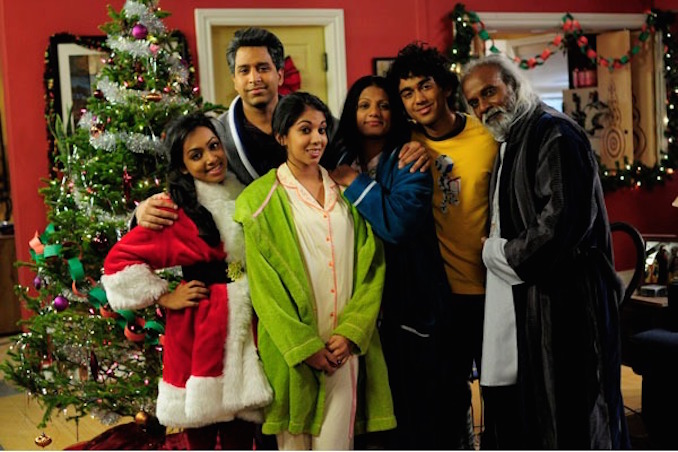 “At this point, to be honest, I had never acted,” said Varun. “I never did drama classes but I did media arts stuff making shorts. I actually acted in them only because nobody else wanted to.”

Varun went to the open call without telling his parents.

Varun soon headed off to University for Political Science at York when he had received his first call back.

By the third audition, he was offered the role.

At this point, Varun began to worry about how he would juggle the filming schedule with schooling as well as how he would tell his parents, still in the dark about his auditions.

When his University staff went on strike, it gave him a window of opportunity and some time before having to explain to his parents. Varun explained that he was so racked with guilt while on set filming the television series How to be Indie while his parents assumed he was trying to keep up with studying, even during the strike.

“It was hard because your foot is in one door and you have to decide what to do and I committed myself to acting. I continued to act in this show the whole time I was in University and my parents didn’t know.”

When the show was ready to air, Varun couldn’t keep it a secret any longer. He watched a few episodes with his family and they really loved it.

He then started landing roles on shows like Schitt’s Creek and I asked if his parents have seen him in these roles and follow the show. “Well, they’ve seen some and I know they are really proud of what I do. But my mom likes to watch Real Housewives of whatever and dad watches The Voice.”

Varun Saranga has a warm, funny and optimistic personality and his success hasn’t gone to his head. He’s kept modest but says that there are times when this type of career can cause someone to lose themselves.

“How to be Indie, was such a stable gig with an influx of money coming in. I wasn’t initially prepared for changes that came with it all.”  But he’s taking everything in stride.

I asked him what he spent his first few paycheques on.

“I was able to pay off my school and then my brother and I pooled all our resources together to buy $30,000 worth of equipment and started making Youtube videos with our friends. That has taught me so much about the behind-the-scenes of making films and I have such an appreciation for that.”

Anything he suggests to keep my eyes on? Varun mentioned the film Dheepan by Oscar nominated, and Cannes Palme d’Or award-winning director Jacques Audiard. The story is about Tamil Tigers and their families who want to escape in hopes for a better life, such a great film to see on the big screen. “There are so many films I want to see about my culture that’s out there and this film festival offers that.”

And what are his big dreams? Varun tells me his heart is in writing and comedy drama.

“I grew up on western films and big popcorn movies and I love to entertain people,” he said. “My favourite comedy movie is Superbad because I was the same age as those kids when it came out and it was very relatable for me. It was so one-track minded, you know? Like, just really wanting to get a girlfriend. I really like the underdogs. But I’m also very interested in the behind-the-scenes and the process of filmmaking as well. I love acting, but as an actor you’re kind of like a piece of the whole puzzle but behind-the-scenes you get to move the pieces.”

Speaking of comedians. Who are his favourites? “I love Louis C.K. and I really love Aziz Ansari a lot,” says Varun. “I think Aziz is so real and so natural. His comedy is not forced and has a lot of great messages and honestly, he was the first comedian I related to. He and I share a lot of parallels. Aziz’s dad is like my dad. They are so identical. But watching his show made me realize that this is all really possible for me. It’s about different stories from people and I really believe that there is room for everything especially in the era of Netflix and Youtube where shows are going for specific audiences. Networks can’t tell us what to watch anymore. We have the power to choose what we want to watch and when.”

And where does he like to eat in Toronto? “I love Java House on Queen Street West but I also love Ethiopian food at Nazareth and all the dumpling places down on Spadina. They are cheap but also really good. I also love heading out to Scarborough. With all the ethnic groups out that way, there are so many options for really good food. I’ve been to a Jamaican Chinese restaurant out there that’s incredible. But this place is pretty good!” says Varun.

If you’re interested in checking out the Mosaic International South Asian Film Festival (August 4 – 7, 2016) visit their website for a complete list of film screening and events.

Famous hand-pulled noodles can be found at Omni Palace