Fans of the hit TV series WORKIN’ MOMS grab your favourite snacks and get ready! This really smart and damn funny show heads into Season 3 premiering January 10 on CBC. The series follows the lives of four 30-something urban moms juggling their careers, love life and then some.

Here’s what we know heading into Season 3… Kate is going through a series a major life changes – she is pregnant with her second child and separated from her husband Nathan following his infidelity. She is a single workin’ mom, workin’ for herself and trying to find a balance. She aims to rebuild her life by moving out and striving to keep her burgeoning business afloat. But in order to do so, she’ll have to toughen up and get into bed with some unsavoury characters, while making room for some unexpected alliances. As the kids are growing up in Season 3, so too are the moms. 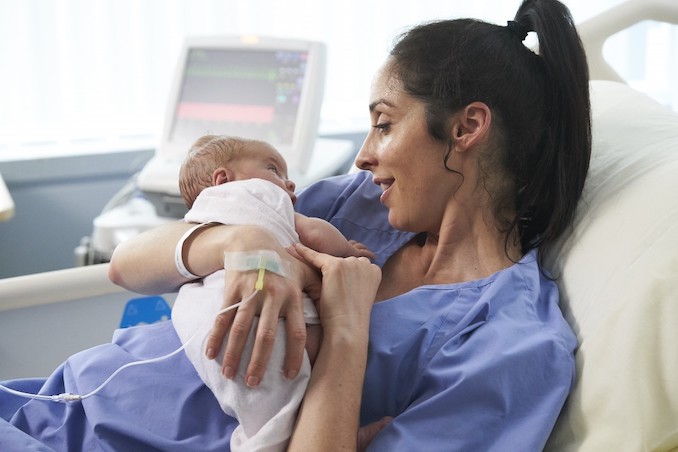 Catherine Reitman is the North Toronto based creator, executive producer, writer and star of Workin’ Moms. She is also the mom of two young boys, and married to the series’ co-executive producer and co-star Phillip Sternberg.

We had a chance to interview Catherine …

Okay, we know in real life your husband is working on the show alongside you. Sooooo, is that awkward especially with the infidelity story line?

CR: The storyline of Nathan’s infidelity was not awkward as Philip gets as high on good story as I do. But in real life, it’s been pretty hard for Philip, as in most restaurants, he’s convinced waitresses have spit in his food.

Do you ever get women saying to you “yeah, that’s how I would like to handle things too!” after watching the characters and what they go through?

CR: I’m always so blown away by the connection both women and men have with this show. When people stop me on the street, it’s not only to tell me how funny the show is, it’s almost always to express how much they feel represented on the show.

I once had a flight attendant jokingly offer to upgrade me to first class, and bump Philip off the plane. So, yes, people feel activated by how our characters are dealing with their circumstances. Philip was able to catch the next flight, it wasn’t a big deal.

Do you feel like you have a major responsibility in representing the characters respectfully?

CR: I feel I have a major responsibility in representing all women. As the characters come from such real places within me, showing them respect is less important than presenting them honestly.

Over the past few years we’ve become more aware of inequality in many workplaces. The entertainment business has opened our eyes to show us that women, in particular, in this industry are not immune. Has that affected the way you approach your show?

CR: Of course. Our Writers’ Room is and always has been a support group for those of us who have experienced inequality. However, our ultimate responsibility is to tell electrifying story.

Last season we were just wrapping production when the Weinstein scandal came out. We already had a sexual assault storyline in place. But due to what was happening, we had to revisit how we handled our villain. In this upcoming season, we dive straight in. Our room decided to handle misogyny in a more direct way which led to a very high stakes, and hysterical, season.

The show has had some risqué moments in past episodes that have taken some people by surprise especially since the series is aired on CBC. What kind of hoops did you have to jump through?

CR: The CBC has actually been extraordinarily supportive. They do, however, have some rules in place. Our nudity, as well as our profanity, has to be justified within the world of our characters.

Even though you’re in the entertainment world, and a lot of people think you’ve got a glam life, what’s is the reality check you wish people knew about you?

CR: Look, I’ve got two kids under 5. I’ve had more feces under my nails than I care to admit.

The funniest thing your kids have done lately that made you laugh?

CR: My youngest son requested to see my husband’s penis at the grocery store.

As a family, what are your favourite things to do during the winter months here in Toronto?

What Happened To CBC News?

I cannot believe I am saying this. A few years ago, I would have never believed that I would be […]

To me, Leora Eisen’s long, award-winning career can be summed up quite simply: Leora champions stories that need to be […]