In a previous post, we chatted with Toronto artist Patrick O’Keefe who works as a concept artist for EA Games in California. When we previously spoke, Patrick had worked on games such as Need for Speed, Dead Space 2 & 3, as well as other projects. We decided to talk to Patrick again and see what he has been up to since we last interviewed him.

The most recently released game that O’Keefe worked on was Battlefield: Hardline. The first person shooter game is the latest release from the Battlefield series. Usually focussing on world war scenarios, the most recent Battlefield has a whole new angle. In this game, there is a war on drugs scenario that allows you to play a cop who goes from being a cop to being a criminal to finally becoming a vigilante before taking back the badge.

Battlefield: Hardline had a very Grand Theft Auto feel to it – lots of cut scenes and very movie-like in its writing and character development. Scenarios in the game take you to different climates and cities which were all beautifully designed with skylines, intense details and very real character artwork.

The game also had a Netflix feel to it. In between levels, you have the choice to wait till the next level start or start by selecting the next episode, just like Netflix. This game has definitely bridged the gap between gaming and movie/television.

What is a concept artist? Do you work alone, or with other artists? Explain the workflow of a project.

Concept Art is the first step in visualization. As a concept artist I work with the writers, art directors, creative directors and producers to help create the vision of the game. As we move into production, Concept Art is used by a variety of other disciplines such as Environment Art, Texture Art, Lighting, and Game Design to help produce the final look of the game. As the project wraps up Concept Artist are called on to do marketing work and colour correction.

When did you first hear about Battlefield: Hardline?

I heard about and started working on Hardline while in the thick of Dead Space 3. I was asked by the Creative Director Ian Milham to create a few paintings to help shop the idea around internally. It would be about nine more months until pre-production started on Hardline.

What was your first vision of the game in your head that you can remember?

I was instantly interested in the idea of the urban landscape replacing the foreign battlefield. The idea of bombed out cities in far off places to me is not as appealing as the battles that exist inside living cities. I imagine a game that was much more real than the final product, one that questioned the status of the western metropolis, the war on drugs and police brutality. I wanted a discussion that presented each side of the argument. Until we understand where we each are coming from we cannot move forward to a single destination. 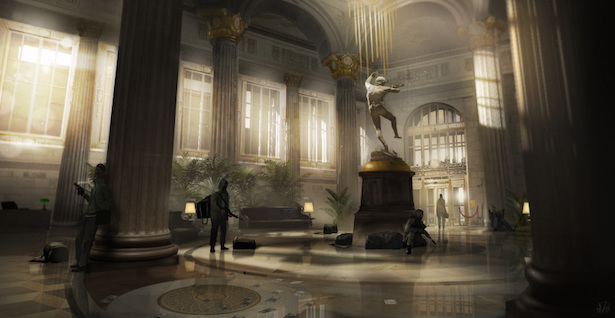 How long before the game was released, were your first images finished of what the game would look like?

What was the response like by your team at the sight of the first completed images?

The first images were very vague about the intention of the game, it was mostly cops and criminals in very high stakes, Hollywood-esque shoot outs and heists. But once things got rolling and I sank my teeth in I started to produce images that speak more to the above mention ambitions. There was a very positive reaction to the work that took a more unconventional approach to the idea of cops and robbers. However it was decided not to make a serious statement and some games are supposed to be games, not social commentary…

At what point do the concept artists stop working on a project?

It is not unusual for concept artist to only be involved in the early development, but in the case of Hardline, I worked on it from day – minus 9 months, until the very end. I created some of the very first images and I did the final colour correction on the shipped game as well I design a PS4 case for marketing in Japan. During that time I did over 200 paintings, the colour script, storyboards, graffiti and signage to go in the game. I have a running theme of my cat (Ghostface Kitten) and myself as cartoon personalities that I have managed to slip into a few projects. This time it was a feature animated film “Ghostfang’. She had recently had a fang removed because it was too awesome and has since been given the name Ghostfang. 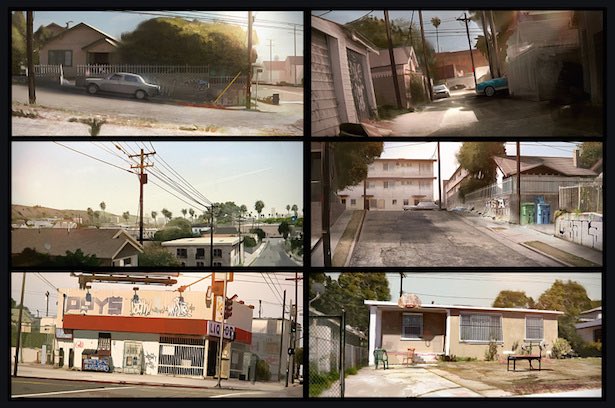 Hard or happy to let it go?

After three years of work I was happy to see it ship. A production of this size is a battle, you are constantly pushing to get your ideas into the game, and pushing yourself to do your best work. In the end, the product becomes the sum of a lot of peoples’ greatest ideas and you are glad to see that some of the ones you may have believed in were cut for better ones.

EA now has Star Wars games coming out like Battlefront. Are you going to work on anything around this? Star Wars fan?

Battlefront will be made by another EA studio, Dice, located in Sweden. I am not involved in the process, but have had a look at what they are producing and I am very excited. I am a Star Wars fan. It is a rich universe that has been an inspiration to us all.

What are you working on right now at EA?

Currently I am working on a different Star Wars title with one of the creators of the Uncharted series, Amy Hennig. It is a great experience to be working with the team at Lucas Film that includes some of my favourite artist growing up. It is mostly unannounced so that is about all I can say about it.

Tell us about some of the other projects you have going on. Cartoons, commercials etc?

Often I will take time to work on a variety of other projects, it is always fun to switch it up for a while and spread my wings. Lately I have been doing design work for a variety of animated commercials including clients such as Mcdonald’s, Kellogg’s, Rice Crispy’s and Kraft. Additionally I have been lending a hand in the development of some virtual reality animated shorts for Oculus and a few other unannounced studios, those are a blast because at each meeting I get a chance to try out the latest in VR tech.

Do you have a preference between video games and cartoons/animation?

I enjoy anything that has a creative twist. Painting and designing really make me tick and the more variety I can find to work on the more wound up I get.

Where do you want to be in another 2-3 years?

As much as I enjoy painting and designing I would like to find myself in more of a directorial role where I can make more of an impact on the look of the final project. I would like to create my own animated shorts, where I am free to make whatever commentary I so choose to.

When I had received an invitation to visit with Canadian contemporary abstract artist Candace Wilson, I needed to clear my […]

God of War Ragnarök (PS5) Review: King in the North!

Our review of God of War Ragnarök, developed by Santa Monica Studio. Available November 9, 2022 for PS5 (reviewed) and […]

10 Things You May Not Know About Gary Taxali

Gary Taxali is one of Canada’s most well-known and successful artists today and although his art is recognizable internationally, he […]