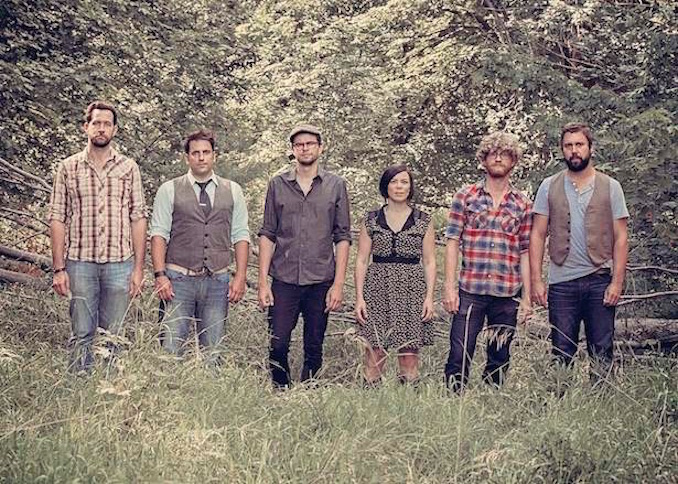 Toronto-based roots-rock darlings The Young Novelists just independently released their sophomore album Made Us Strangers and they’re excited to share their new songs.

Twelve songs that are hopeful, honest and sincere. The type of folk rock that makes you feel something; all good feels.  Lead duo Graydon James and Laura Spink create a wall of magical harmonies that are candy for the ears. From heart-tugging  violin to loud electric guitars, the instrumentation on the album is really well done and there is something for everyone.

Since starting the band only five years ago, The Young Novelists have received a Galaxie Rising Star Award and two nominations for the Colleen Peterson songwriting award.

I spoke with Graydon James about the band’s new album and all the things they love about our lovely city.

Congrats on the new album Made Us Strangers. Tell us about the recording process.

We’d set up, the producer would say, “You have one take to get this right, or I cut off your hands!” and then, boom, hit record. More seriously there were a few differences between this album and previous recordings. First we did full recordings of all the songs we’d written (about 22 or 23) in demo format, to start getting an idea for arrangements for the album. And we took those demos and had a “demo listening party” for a bunch of friends and fans that we trusted to have honest and constructive feedback and got them to rate what songs should be on the album. The songs that made the cut we took to our producer and started heavily re-arranging and re-tooling parts until we felt like they were recordable. Some tracks we knew would be traditional multi-tracked recordings (get the bed tracks, add the extra rhythm parts, then lead parts, then vocals, and so forth), others we felt were better served by doing live-off-the-floor or even just recording with no click track to give it a bit more space. That was a little harrowing because sometimes you don’t know if it’s going to come together until you have most of it recorded and then realize, oh this idea didn’t work. But it was essentially three or so weeks of recording and then a few months of doing mixes for a week here or there, then listening for a while, then re-mixing for a week.

Kudos to our producer, Carlin Nicholson, for having the patience to deal with a band that was trying to be as democratic as possible. Democracy is great, but it takes time.

Who does the songwriting? Do you split the duties when it comes to arranging and writing individual parts for live shows?

I write the lyrics, chords, and melody, but I don’t really feel like the song is much of anything until the rest of the band starts adding their parts. They all arrange and write their own parts, although like I say we are a democracy and anyone can comment on anyone else’s part, hopefully to make it better.

Are the band members consistent these days? People always have so much going on with other projects and work etc.

Actually through the recording process we learned that two band members are moving on to other things. Very amicably, by the by. Our keyboardist now co-owns a bakery/cafe called Bloomer’s (near Bloor & Ossington, check it out!) and our bassist got married and got his teaching degree. So, the rest of the band members are all solid as a rock but we are currently searching out a new bass player and keyboard player. Our CD release show in Toronto (May 22nd) will actually be our very last show with the “Original Six”, as it were. It’s kind of, well, it’s very bittersweet!

Were the songs on the new album a collection you’ve written over the years or were they created over the past little while?

One of the songs is very old, one was written as a potential for the last album but didn’t end up going on it, and everything else was written expressly for this album. I definitely get into a certain kind of theme when I start writing songs close together, and so it somewhat naturally lends itself to an album format.

Do you find it easier to write a happy or sad song?

This is a knotty question. Not to be overly cerebral about it but, you know, what is easy and what is hard? Do I measure that in terms of effort? Time? How many re-writes I have to do? Or whether it required a certain amount of skill (musical, linguistic, creative) to write? I could gloss over that and tell you that, personally, I find it equally easy to write a happy or a sad song. I find it extremely hard to write a good song — so hard that I have yet to do it.

I started playing drums in Grade 10 because my dad was a drummer and we had a drum kit in our house and we lived in the middle of nowhere, so I could make a lot of terrible, terrible noise. I still love playing drums and, by the by, if anyone needs a drummer, give me a call. I’m a very bad drummer, but I really enjoy it! Performing music, even in rehearsal, it always has a certain kind of energy that makes me feel a bit more aware and a bit more alive. That sounds ridiculously cheesy. But that act of creating music, especially with a group of people, it’s like stepping outside on a beautiful day. It feels good and it satisfies something that you weren’t even previously aware of. As for writing songs, I think the quest to write a decent song is what keeps driving me forward. Maybe someday… Fingers crossed.

If you had to collaborate with one Toronto band, who would it be and why?.

Zeus. I’m a massive classic-rock fan and what they’re doing is both familiar in a way and fresh in a way. Once upon a time I was in a band with Carlin (I played drums) and it was always a hell of a thing to come to rehearsal and hear a new song and have my songwriting brain flipped over by what he was doing. I’m bare acquaintances with Mike and Neil, but their songwriting is equally stellar.

Whenever my opinion on any of the songs is required, I do what I can to remove myself from the equation. Case in point: selecting songs for the album. We had a demo listening party, as I mentioned, and so friends and fans rated the songs. The other band members also rated the songs, and we chose the final tracks based on all those ratings. I didn’t partake in the rating process. Frankly, I have just about the worst taste in music of anyone I know, so it’s just a smart move to put my opinion about these songs aside and proceed that way.

I have a 4-year old son, so there’s a lot of time spent in parks, playgrounds, and working with Lego, all of which is fantastic. He’s also a great storyteller, so just getting him to tell me about his day is fun and entertaining.

Matt Murphy from a now-defunct band called Flashing Lights is, I think, one top-drawer, under-recognized songwriter. Levon Helm for being a singing drummer as well as one of the best “feel” drummers I’ve heard. And, as corny as it is, Laura Spink who is in The Young Novelists but is also one of the hardest working people I’ve ever met and constantly pushes me, in a good way, to be better at what I do.

Home. As a musician it is sometimes a real treat just to eat in. Having said that, brunch at Vivetha on Queen St East is pretty boss.

What do you think of physical vs digital album sales? Do you have a preference? Are CD’s done?

My personal preference is to own a physical copy of something, but I’m from a bygone age of mass consumerism. I think digital albums are great for so many reasons, not the least of which is the environmental benefit. I don’t think CDs are done, at least not for the immediate future, but I won’t be upset if and when they disappear.

We’re gallivanting around Ontario until August (with one quick festival in Vermont), and then we’ll be heading to the States in September and Europe in October. Touring is quite a fantastic thing to do, so I always look forward to it! We’ve started bringing our son with us when we can, and that makes it all the more enjoyable, family-band style!

What is one thing about each band member that people wouldn’t expect?

I think mostly people would be surprised to learn what we do for our day jobs. Laura (vocals/percussion), for example, is a hydrogeochemist working for the Ministry of the Environment. Mike (drums) is a mechanical/civil engineer who was once part of a team that designed and built a hyper-accurate clock shaped like a giant iron ring. Alex (keyboards), as I mentioned above, co-owns a vegan bakery/cafe and I believe he’s been managing restaurants since he was 17 or something ridiculous like that. Shawn (bass/vocals) is going to be a Montessori teacher and was a mastering engineer who actually helped build part of Joao Carvalho’s mastering studio. John (lead guitar) is a philosophy grad student and people often think he’s the oldest member of the band but he’s actually the youngest. I don’t mean that as a dig on John…he’s got an old soul. The rest of us are quite immature. I took tap dance lessons from age 5 to age 18.

In the absence of poutine, I will say nachos!

I live in the east end, so I prefer The Beaches, but High Park has an excellent play structure that I enjoy climbing around on with my son.

Both! I hate sleep, it is supremely annoying.

Both are fantastic for the exact opposite reasons. If I had to choose I’d probably say studio.

So what’s next for The Young Novelists?

I’m about halfway done writing songs for a new album, so I hope we will have another album out next year!

To celebrate the new album, the band is playing a special CD release party tonight at Little Trinity Church (425 King St. E) on Friday May 22.

The show will feature the original 6-piece band made up of lead duo Graydon James (vocals, acoustic guitar) and Laura Spink (vocals, percussion), as well as John Law on electric guitar, Shawn Jurek on bass/vocals, Alex Dodd on keyboards and drummer Michael Paddags. Cellist Raphael Weinroth-Browne from the band The Visit and viola/fiddle player Lea Kirstein will also be joining the band for this special evening. Doors are at 8 pm. The Young Novelists will go on at 9:30 pm.

Here’s a taste of what you will see tonight at the band’s album release show!

For up to date news and concerts check out their website.

Toronto-based singer and songwriter Susie Fayth has always found ways to express herself through music. Having grown up in a […]

Derev is a progressive Rock/Metal band from Toronto, Canada, formed by the Italian/Armenian guitarist Armando Bablanian and the Syrian/Armenian drummer […]