As talk of the 2015 Pan-Am games circulates within the news, I thought I might take a look at the area which will house its Thunder Dome (or Athletes’ Village, as THEY like to call it), located in the former southern reaches of Corktown. This area is slated for redevelopment as the “West Don Lands”. 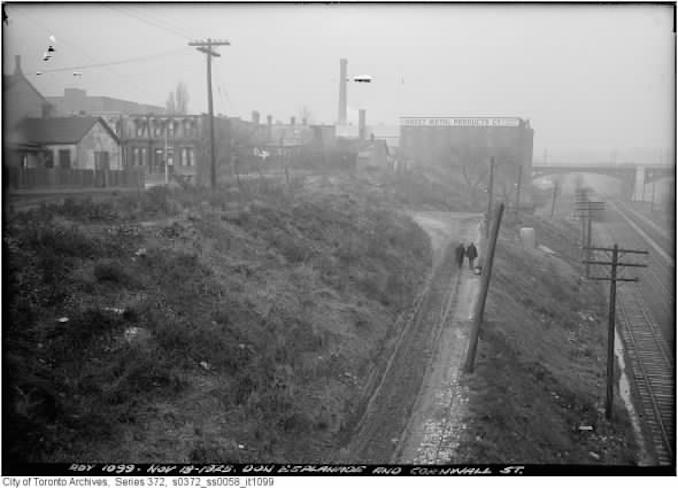 Once brimming with factories, furnaces, and pump houses, southern Corktown also housed a large community of workers. Long forgotten are the cottages, shacks, and general slum conditions of the area during the early half of the century. Looking at these images, one can imagine the poorly insulated houses, wood burning stoves, large families, and the overall cramped conditions which prevailed in the neighbourhood.

During the deindustrialization of the 1960’s and 70’s, entire blocks were wiped out and streets such as Olive, Vine, Water, and Cypress disappeared forever. The area until recently has been mostly abandoned and dilapidated, despite schemes in the late 80’s towards re-development. The only clue remaining of the former neighbourhood is the Palace Street School building (1859), which later housed the now-famous “Canary” restaurant, at the corner of Front and Cherry streets.

Thankfully, the area will experience regeneration with its temporary transformation into an arena of death… or “Athletes’ Village”, and in future as a residential/condo neighbourhood.  Those interested should probably begin the purchasing of babies and strollers.

With photos from the Toronto Archives.

Today, skiing downhill in Toronto is limited to Earl Bales and Centennial park. Much like tobogganing, skiing and snowboarding has […]

I was browsing the Toronto Archives again this weekend and put together a collection of vintage Toronto winter photographs ca. […]

In celebration of Black History Month, we’d like to take the time to showcase the life and achievements of William […]