Lisa L’Amour’s Pulitzer-nominated play Detroit is a darkly funny, anxiety-inducing slice of f-ed-up life that offers up nearly as much laughter as it does cringeworthy antics that will have you squirming in your seats. A case study in self-centred, toxic individualism, it may not have much original to say about 21st century economic insecurities, but its blistering portrayal of four dysfunctional neighbours at a series of backyard barbecues is entertaining, engaging, and oh so very bleak. 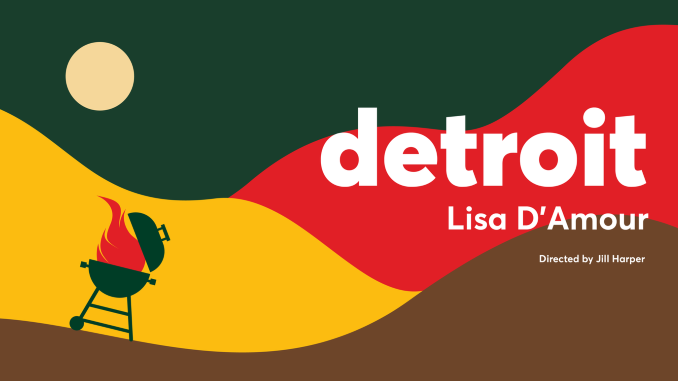 Detroit, the closing play for Coal Mine Theatre’s truncated 2022 season, is the story of two couples who, but for becoming neighbours in an unnamed suburb, might never have crossed paths otherwise.

Young homeowners Ben (Sergio di Zio) and Mary (Coal Mine co-founder and co-artistic director Diana Bentley) are uncomfortably middle-class, their generic suburban home – you don’t ever see the white picket fence, but you just know it’s there – a prized possession during a time of deep economic anxiety. Recently laid off Ben has grand plans to reinvent himself as a financial planner, spending his days building a website which, for all his talk, might as well be Lenny and George’s rabbit hutch. His unhappy wife Mary strives to keep up Stepford-like appearances, her increasingly ludicrous displays – check out that caviar served next to the hamburgers – only reinforcing the instability of her life and her deteriorating marriage.

Ben and Mary’s life together, clearly already in trouble before the play begins, is thrown into further disarray by the arrival of a new couple next door. Kenny (Craig Lauzon) and Sharon (Louise Lambert) are a bit more rough-and-tumble than Ben/Mary are used to, admitting early on that they met in rehab and are now trying to get their lives in order. Kenny is a big, tough-looking dude with beard, ponytail, and a predilection for tank tops, but with a soft nature and high-pitched laugh that has him come across as a kind of lost schoolboy. His partner Sharon is a bit of a flake with flowery ideas (and nostalgia for the good ole days of neighbours talking to neighbours), but she’s also a bundle of insecurities. One well-observed character touch is that, despite being a volubly expressive individual, she’s constantly turning to Kenny to check, “am I saying that word right”?

Interestingly, though it’s Kenny and Sharon who are outwardly the “alien” types in this landscape of traditional middle-class values, it’s Ben and Mary who prove the most dysfunctional and least happy. In a way, Detroit is a sort of race-to-the-bottom between neighbours: who can have the worst relationship and make the biggest spectacle of themselves over the space of ninety minutes?

While everyone is kind of awful, it’s probably Mary, the neurotic, repressed, control freak who probably comes off worst. The most cartoonish of the four characters, Mary is so unsympathetic that when an actual “Karen”-type comes along later in the play, that character looks good in comparison.

Detroit can be read as a number of different things, playing with a number of different themes. Most overtly, there’s the economic anxiety of the central cast, though oddly, for a play called Detroit, there’s nary a reference to auto workers. L’Amour’s programme notes, indicating she chose her title because it evokes a “particular anxiety” about the “American dream drying up”, evince a rather superficial/reductive take on the Motor City, in a play that never feels particularly “Detroit”. One wonders if another title – “Neighbours”, perhaps – might have been better suited.

At the same time, Detroit is also about the socioeconomic divide: while Ben/Mary are learning what it is to struggle financially, Kenny/Sharon never had much to begin with. Yet the fact that Ben/Mary have a support system, various economic cushions (read: parents) to fall back on, is also telling. As are the regular references to health insurance, or the lack thereof, in this very non-Canadian play. Additionally, Detroit is also about the bane of addiction: each character has an addiction of one sort or another, from drugs to alcohol to Internet to control. L’Amour’s script is largely nonjudgmental, allowing for each character to suffer an addiction without ever condemning them for it.

Ultimately, it’s the ever-shifting interplay between Kenny and Mary, Sharon and Ben, Sharon and Mary, and Kenny and Ben which forms the backbone of the play, even as it takes some obvious turns – sexual tension telegraphed from the opening scene – to the absurd. In many respects, it reminds me of the works of Yasmina Reza, best known for the play God of Carnage. Reza specializes in placing a small group of characters in seemingly banal situations – parents meeting up for tea, a friend showing off his latest art acquisition – and gradually escalating tensions to the point of absurdity. Detroit is much like God of Carnage or Art, albeit with slightly less comedy and twice as much viciousness. Unlike Reza, however, L’Amour can’t quite resist the urge to dial a notch or two beyond the point of normal human behaviour. That includes the decision to conclude Detroit on a needlessly melodramatic turn that sort of makes sense, but only if you view the characters as archetypes instead of people.

The blessing of that ending, at least in the Coal Mine production, is that it allows for an extended cameo from a veritable Canadian theatre legend. I hadn’t noticed Eric Peterson’s name in the programme, and was pleasantly surprised when I heard that familiar voice when he dropped by the neighbourhood for the final minutes of the show. Peterson’s character puts a too-trite cap on the events of the play, but it’s nice to have him nevertheless.

With Detroit ending the Coal Mine Theatre season, Toronto theatregoers are excitedly anticipating the announcement of the next set of plays beginning Fall 2022.

To keep up with Coal Mine Theatre, check them out at:

Our review of Detroit: Become Human, developed by Quantic Dream. Released on May 25, 2018 for PlayStation 4. WHAT IS […]

Motoring Down to Motown: Why Detroit is an Underrated Road Trip Hotspot for Torontonians

You have a weekend, three-and-a-half hours worth of gas in the tank, and a killer playlist all queued up. Do […]