This past weekend, the Metro Toronto Convention Centre played host to Toronto’s latest and greatest assembly of masks, capes, cowls, and spandex. 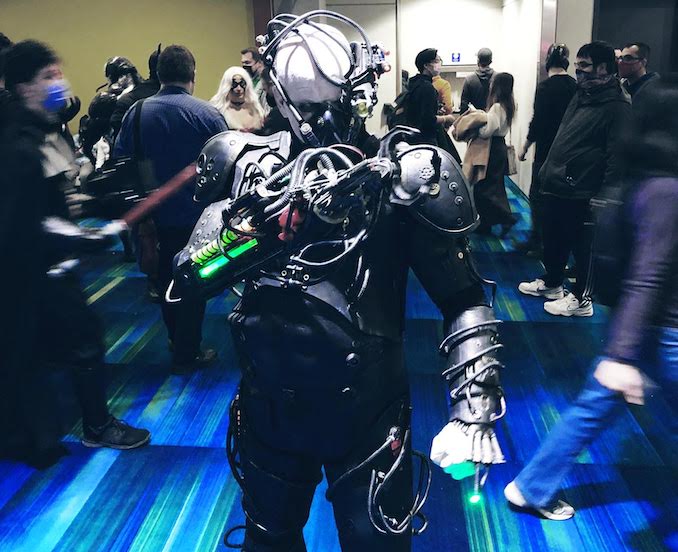 We refer, of course, to Comicon 2022, this year’s first big excuse to dress up in your superhero, anime, sci-fi/fantasy spiffiest. Unlike last year’s Fan Expo, this was an at-capacity affair, Ontario’s loosening pandemic restrictions making it possible to pack in the fans and the booths. One thing noticeably absent, however, were the big celebrities. Between John Cusack(?!)’s cancellation and the lack of familiar faces from big franchises, con-goers were left with the original Power Rangers cast and a Degrassi Junior High reunion as the big draws for the weekend. We love Spike and Joey Jeremiah as much as the next Torontonian, but a Degrassi reunion isn’t exactly a ticket-seller, not unless one Aubrey Graham makes a cameo. (He did not.)

Lack of celebrities aside, this year’s Comicon was an enjoyable celebration of all things fandom. Artists’ Alley gave fans an opportunity to meet with and get autographs from the likes of Joe Rubinstein (inker on the original Infinity Gauntlet and Wolverine miniseries) and Dan “Kevin Keller” Parent. Exhibitors across hundreds of shops sold everything from crochet superheroes to custom cosplay weapons to classic action figures and comic books.

Cosplayers were in abundance; the requisite Lokis and Scarlet Witches made their appearance, while some impressive work went into a fully-fledged Borg costume, the Tim Burton Batman/Catwoman, and one very lifelike puppet Venom. (And it didn’t even have Tom Hardy’s obnoxiously fake Brooklyn accent!) Oh, and Lou Ferrigno was there. Which, when you think about it, is kind of impressive: Ferrigno played the equivalent of a CGI monster on a 1970s Marvel TV show, and has somehow managed to parlay that into a career of con appearances. Not bad for a retired bodybuilder.

Truth is, while it was nice to congregate with fellow geeks once more, this year’s Comicon paled in comparison with previous iterations. While forgivable under the circumstances, it was too bad that after October’s Fan Expo (from the same production company) gave us George Takei and Bill Shatner, Comicon could not rustle up a few more interesting people. Ah well, at least the Hobbits are coming to Fan Expo ’22.

Chetan Patel loves comics. When he arrived at Ontario College of Art in the early Nineties, it wasn’t long before […]

“A Day in the Life” with Toronto Artist Haley Millman

Haley Millman is an emerging illustrator and comic artist. Comics were her passion from a young age and after attending […]