There are several types of families in our lives. Our immediate families we are raised in, our work or school families, even our neighbours become an extension of our family. This is what the new comedy sitcom is all about. For Run the Burbs co-creators Andrew Phung and Scott Townend, comes this brand new feel good and relatable show that’s full of heart.

Run the Burbs is about family, by family, for family. The show centres around the Phams — a modern day mixed-culture family living their best life in the suburbs. Their neighbours can easily be any of our neighbours — the partiers, the one who knows everyone’s business, the one who borrows everyone else’s garden tools and so on. The Phams are often the instigators of their neighbourhood events and have become the heart of the enclave they live in. As they navigate the challenges of everyday suburban life, they know as a cohesive family they can face anything. 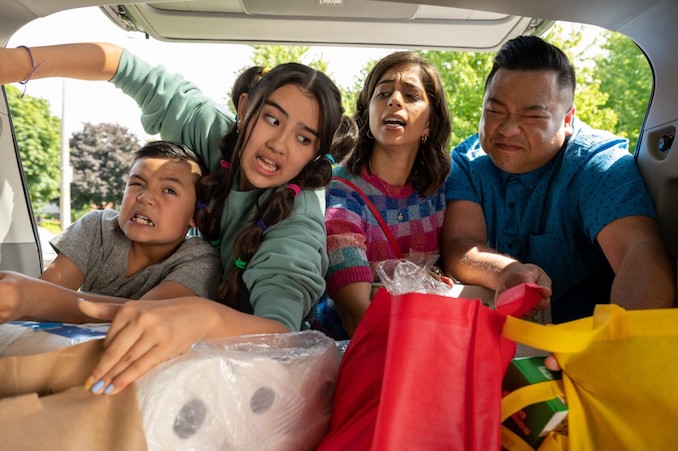 Andrew Phung (yes he played Kimchee on the award-winning TV sitcom, Kim’s Convenience) had the idea of creating a comedy series about a young family living in the suburbs. So, it was natural that he turned to his best friend of 15 years, filmmaker and writer, Scott Townend, and whom he had created sketch comedy videos with over the years. Phung had this idea of bringing that spirit of family sitcoms of the 80s but with a fresh 21st century sensibility. He approached Townend in 2019 and they began shaping the show. Then, in early 2020, they partnered with Pier 21 Films — who Phung worked with for two seasons of the satirical series The Beaverton, and started development of Run the Burbs.

During the pandemic they pulled together a stellar team of comedy writers including Rakhee Morzaria, who also plays Phung’s on-screen wife. They all worked together, but apart, and actually were never in a room together until they went into production. But their shared sense of humour and trusted gut-instincts for this project gave them wings.  They brought the idea to the CBC and they were very receptive.

Casting the roles had a few pretty obvious choices. Phung fills the shoes of Andrew Pham, the most loveable father of two kids and supportive husband to Camille. Not much of a stretch for him from real life. Pretty much what you see on screen is a reflection in his character’s personality. He’s pretty transparent about life and all whether you meet him on the street or if you follow him on social media – yes, he’s pretty cool and approachable. And yeah, his sneaker collection is impressive (keep your eyes peeled!)

“Yeah, it’s like who you expect from TV but with subtle changes,” said Phung with a laugh during our interview. He recalls walking down the street pushing a stroller and people were shouting “yo, it’s Kimchee!” And then came, “oh, damn, Kimchee got kids!” with big smiles all around.  “I think I’ve been very open and honest to the public of who I am comedically. This is my full voice and what’s really exciting making this show is that it’s really more in my voice but also you’re learning a bit more about me.”

Morzaria plays the role of Camille, the multi-tasking can’t sit still wife to Andrew. As she was brought into the writing team, she was able to shape the character to be more relatable to today’s audience. Camille is ambitious and juggles her professional career  and family life while serving up a side of inspiration as a “foodfluencer”.

She explained that she really wanted to create a character that could hold her own. In Camille, she wanted to show her as a three dimensional woman who not only is a mom but also has a professional career (the main money maker in this family) as well as has her own creative outlet that she was working on. “It was really important for me that she was her own woman and that it wasn’t about representation of women on screen that are too perfect. They don’t exist,” said Morzaria. She also didn’t want this character to be helpless or are in service of the man. As an actor, she advocated for building up the character with these layers in place. It was important for her that Camille be shown even with everyday flaws and complications she was going through as well. “I think that’s just needs to be seen more on television too.  I like seeing women who are honest and real. I mean of course, it’s a comedy too!”

The other important factor for Morzaria was how to continue to make her character funny. As a young woman growing up she tells us even though she did see women of South Asian descent on television, she never saw them in the world of comedy. “I was obsessed with comedies. So, it was important to me that other young women see a woman on screen being funny and silly and holding her own as well.”

The subtle nuances of various cultures are also woven in and very much part of what the writers know. Phung remembers attending a customary Philippina Debut and how he was asked to be the dance partner for this important occasion. But laughed as he thought he was asked because he was the same height as the girl. “This is the world,” he said. As the team was working on the show, they had conversations about these nuances of Asian and South Asian families and how they could work them in. They brought on cultural consultants to help to ensure they were authentic and represented the communities. While the show centres around an asian family, it’s really a show about family — but I admit it is fun to see these hints naturally flow.

The Phams are a modern day family. While Camille juggles her career and home life, Andrew manages the day to day. “It’s a really beautiful partnership that they have and while it’s not a huge focus, it’s just there and  part of the fabric of the show,” said Morzaria. “Viewers enter in and will understand that this is more about a family that supports each other no matter what.”

Having previewed the first episode in the series, I loved how relatable the characters are and being raised in the quiet suburbs of Toronto myself, the setting felt very familiar. I had wondered if the neighbourhood and house in the show was located somewhere in Don Mills or Scarborough. Townend and Phung showed instant happy nods to the thoughts. They tell me that the house itself that’s in this show was actually in Hamilton but they wanted the setting to feel like a suburb anywhere and not just in Canada. “We wanted people to see that neighbourhood and say ‘I know that neighbourhood’!” said Townend.

While it brought me that “Brady Bunch” vibe this feels different from the 80s or even 70s sitcoms. “The throwback to those classic sitcoms was also about how the families really loved each other but they were studio shows,” said Townend. “They never really showed the real world. In this show, we’re going out into the neighbourhood all the time.”

Life in the suburbs isn’t lacking of energy as many may perceive. “We wanted this to be really inclusive of the ‘burbs as we saw growing up,” said Phung. “I grew up in the ‘burbs where there was always a party happening on a front lawn or driveway.”

So, what sitcoms did they love growing up?

“YOOOO…. MOISHA!” pipes up Phung with full excitement. “Also, In the House with LL Cool J and Sister Sister! There was a golden age of comedies that don’t get enough credit like Step by Step. I think for us it was like bringing back that vibe of classic family sitcoms but updated with modern family values with a family that you’ve never seen on television but know exists.”

I asked Phung and Townend if they ever dreamt their comedy work would get to this level. “Yeah, we knew,” said Townend. “Just kidding! It’s a dream come true I think for both of us. Working with Andrew is incredible and always has been. We’ve been working together a lot especially over production and we would see each other every day working on scripts and stories. We just get along so well, it’s almost surprising how well it’s worked out in a lot of ways. To go from little sketch comedy skits that we’ve submitted to festivals 13/14 years ago to making a TV show together is unbelievable.”

Phung a funny personal moment. “Scott didn’t tell me this but when we submitted The Bible (and the bible is like a eight page outline of the show and the characters) the last page was all these photos of us in Polaroid form that were photoshopped together and under each one would say “us eating dinner” or “us at the movies,” said Phung. “When the show got ordered, he sent me a video of that page and he removed the layers of the photos. The photo in the middle the caption said “we just sold a TV show” so that was in the layers of The Bible! He manifested it!”

I mentioned to Phung that I cannot wait to watch this show with my own family. “That means so much to us! We think it’s a show you can consume with your family,” said Phung. “Even though it’s a comedy we know there are moments to have conversations with your kids. I also think when the kids watch, they’ll now have heroes in Leo and Khia and see themselves in them. I’m so excited for this show that is also for the next generation of families and kids.”

Townend sums up the series perfectly. “It’s the people you want to spend time with — that was the dream. We wanted to create a family that felt like we wanted to be in that family, or hang out with that family.”

Big thanks to Andrew Phung, Scott Townend, Rakhee Morzaria and CBC for this interview!

The country’s largest all-Canadian music festival returns for the seventh year to Echo Beach in Toronto on Saturday, May 25 […]