On November 29th, Thunder Glove, Canada’s premier barbarian band, will perform at a special 40th anniversary screening of Conan the Barbarian at the Revue Cinema, paying tribute to the iconic John Milius directed 1982 film that gave rise to Barbarian culture within the film industry. 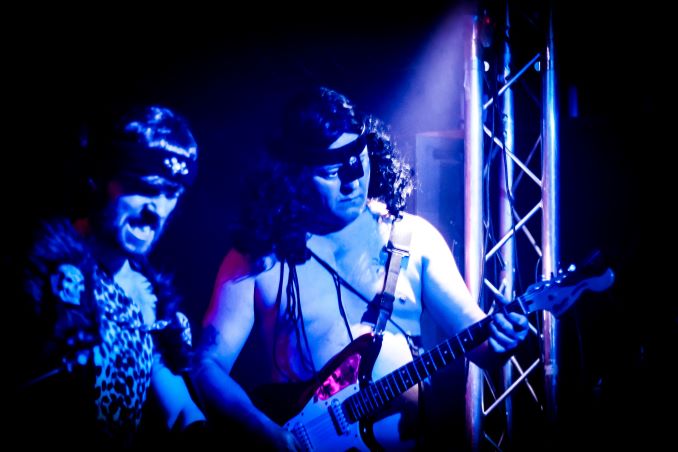 Throughout the series of pandemic lockdowns, founder Greg Dalgetty was inspired to take up the synthesizer after rediscovering the plethora of Conan-inspred Barbarian films that came to life throughout the late 80’s and early 90’s. Films such as Deathstalker II, Barbarian, The Scorpion King, and The Beastmaster all have captivating scores, many featuring the synthesizer as a hallmark within their soundtracks. Having played in several bands previous to this, Dalgetty drew inspiration from the catchy Deathstalker II theme song, composed by Chuck Cirino, and began to write similar music. “This planted the seed that maybe there should be a barbarian band that plays this rousing music”, he said in reference to his drive to transform this musical genre into a live music experience.

In 2021, Dalgetty recorded the Thunder Glove’s first album, Escape from Hell Mountain, as a solo record, undertaking all 8 instruments. After the lockdown had waned he was able to build the remainder of the band, consisting of Jessica Thunder on bass guitar, Scott Thunder on drums, Trevor Thunder on lead guitar, and himself on synthesizer, leading to the recording of their second album, Taste the Power of Thunder Glove. Since the band’s conception, the 4 musicians have performed at several venues throughout Toronto, including The Baby G where they played for an audience of over 150 people. Throughout their sound and performance style, Thunder Glove plays into the Barbarian culture or fandom that was created by the fictional characters and universe of Conan and its predecessors, transforming their 8-bit retro video game sound into an immersive Barbarian experience by dawning Barbarian attire and acting in character, both of which are reminiscent of the barbarian style films.

The character of Conan first appeared on the scene in the form of short stories by Robert E. Howard in the 1930s, later gaining steam after appearing in Marvel comic books in the 1970s. Soon after, in 1982 the written stories and illustrations were transformed into the archetypal film of Conan the Barbarian, jump starting the stardom of a young Arnold Schwarzenegger. Having brought to light the first Barbarian characters in Hollywood and in the film scene as a whole, Conan led to a domino effect of barbarian style films and by extension musical groups, such as Thunder Glove. “This spawned dozens of movies riding on the coattails of Conan”, Greg said. Additionally, the effects of Conan on pop culture were twofold, as the film also served as the big break of Arnold Schwarzenegger, who went on to become a household name and star in prominent films in Conan’s immediate wake, including Terminator, Predator, and Total Recall. Thus, while Conan primarily served to garner the initial popularity of barbarian culture and style films, it also had an indelible influence on pop culture at the time and up to the present day.

For Thunder Glove, opening for the screening of Conan symbolizes a full circle moment, especially for Dalgetty who grew up in the late 80s during the prime of Arnold Schwarzenegger’s acting career, and is now opening for a screening of his big break, while simultaneously pursuing music in a genre largely popularized by the actor.

At the Revue, a nonprofit cinema in Roncesvalles and is now celebrating its 110th birthday, Thunder Glove will be performing the film’s hallmark “Anvil of Crom”, which many regard as “one of the best film scores of all time”, said Dalgetty, along with songs from the band’s two albums. “We are honoured to salute Conan, one of the greatest barbarians of all time, at the glorious Revue Cinema for this special event. Prepare yourselves for an epic evening of swords and sorcery, barbarism and unspeakable lust”, he remarked.