According to the popular West End Phoenix (WEP), a well-loved community paper, there are over 50,000 Indigenous people living in this city. In their latest audio series, “West End Phoenix: the Indigenous City Edit” they offer an innovative space for many creative voices within the community to be heard and offer listeners a fresh perspective on what it’s like to be Indigenous in Toronto. 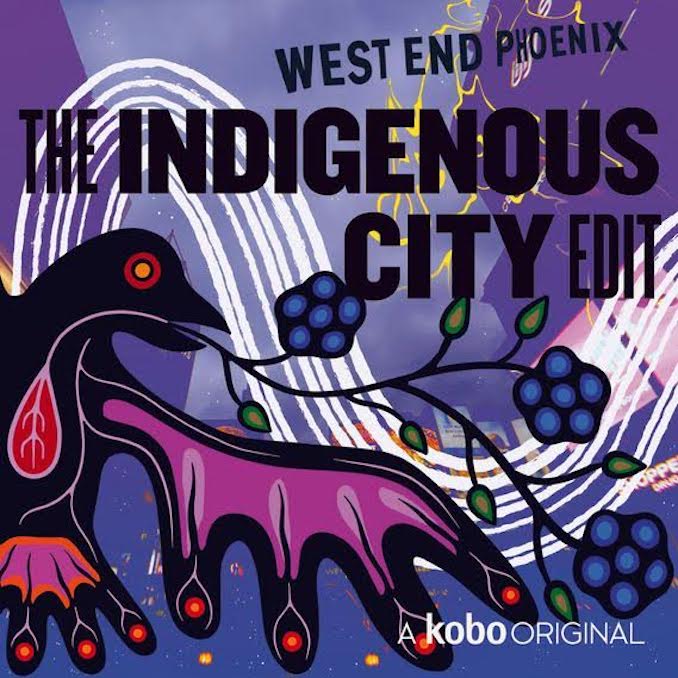 The short stories are personal memories of some of the most accomplished creatives in our city. As a listener, you’re brought into significant and life shaping moments in time for the subjects. As the memories unfold, you may feel the urge to ask, “and then what happened?” or ask “how did that happen?” or maybe “why did that happen?”. In other moments you may experience a sense of joy and can’t help but smile.

WEP is known for involving some of the country’s greatest writers and photographers as they share their stories about their neighbourhoods. The Indigenous City Edit brings a collective of amazing contributors including…

Waubgeshig Rice: storyteller, award-winning author and journalist. His short story collection Midnight Sweatlodge won the Independent Book Award and Northern ‘Lit’ Award both in 2012. He also was awarded the Debwewin Citation for excellence in First Nation Storytelling in 2004.  In 2021, he launched the podcast Storytellers with Jennifer David where they feature Indigenous books and bring the conversations to a broader audience.

Leanne Betasamosake Simpson: musician, writer, poet and academic. Author of several books including Noopiming: A Cure for White Ladies, named one of the best books of 2020 by the Globe and Mail. In this novel, Simpson’s artful writing style offers readers an alternative view of healing and Indigenous transformation. This Accident of Being Lost has been described as a collection of shorts stories and poetry that is both poignant and humorous — ways in which the Indigenous people used to help them survive and find joy despite the history. This book won the MacEwan University Book of the Year; was a finalist for the Rogers Writers’ Trust Fiction Prize and the Trillium Book Award; was long listed for CBC Canada Reads; and was named a best book of the year by the Globe and Mail, the National Post, and Quill & Quire. With  Simpson’s stunning voice, critically acclaimed record Theory of Ice was recently released by You’ve Changed Records.

Chief Lady Bird:  an Anishinaabe artist (painter, illustrator, muralist) who lives in the Upper Beaches. Her art practice stems from memory and connection. Her art inspires strength and healing. She has collaborated with fellow Indigenous (Oneida) artist Aura and their work can be found around Toronto including murals on Queen Street West, Beverley and D’Arcy Street, Ravina Gardens, Withrow Public School, Ryerson University and Underpass Park under the Don Valley Parkway. Her work has also appeared in solo or group exhibitions at Twist Gallery, the Gladstone Hotel, Gallery of Northumberland, Arts Square, the Lieutenant Governor’s Suite, Yorkville Village, Super Wonder Gallery, the Carlu, Harbourfront Centre, Summer in the City Gallery and the Woodland Cultural Centre. By the way, she’s also the illustrator of the cover for this audio series.

Ryan McMahon: an Anishinaabe writer, comedian and is renown in his podcast work. His show Thunder Bay was named to the ‘Best of 2018’ lists with Globe and Mail, CBC Podcasts, Apple Podcasts, Spotify, New York Magazine, Vulture magazine and The Atlantic. His hit podcast series Red Man Laughing has recently returned for its 9th season. In 2012 McMahon became the first native comedian to ever record a mainstream comedy special with CBC. Since then he’s recorded other specials and was touring around North America (pre-pandemic times). He’s performed at Just For Laughs, Winnipeg Comedy Festival , New York Comedy Festival, and more.

Ivy Knight: is a former cook turned food journalist. She’s the creator and host of Industry Sessions – a speaker series for food professionals. She develop Canada’s largest industry night, 86’d Mondays, at The Drake Hotel in Toronto, which has hosted chefs and food personalities including René Redzepi, Gail Simmons, Christina Tosi and Anthony Bourdain. In 2019, she was was nominated for the Landsberg Award, presented by the Canadian Journalism Foundation that celebrates a journalist who is raising awareness about women’s equality issues in Canada.

Alex Jacobs-Blum: award winning photographer. Nationally Jacobs-Blum’s work has been exhibited at the University of Ottawa, Woodland Cultural Centre and
Critical Distance Centre for Curators. He is the recipient of the 2015 Canon Award of Excellence for Narrative Photography as well as the 2017 GAMMA Young Artist of the Year, Yonsei University.

Liz Howard ~ poet. Her debut collection collection, Infinite Citizen of the Shaking Tent was a shortlisted nominee for the 2015 Governor General’s Award for English-language poetry as well as  the winner of the 2016 Griffin Poetry Prize where the Judges’ Citation describes her work as ‘delightfully off-balance with its mix of lyricism and experiment, allusion and invention’. Her poems are filled with energy and magic. Howard’s work has appeared in The Capilano Review The Puritan, and Matrix Magazine.

The Kobo Original series is hosted by West End Phoenix writer, publisher and musician David Bidini and is produced by Michael Philip Wogewoda.   The West End Phoenix: The Indigenous City Edit a perfect on a walk as you listen and reconnect with the contributors in a meaningful way. The audiobook is available now through Kobo ($6.99 CDN).

More about the first audio edit titled The Hungry City Edit can be found here.

I am a true Torontonian born and raised in the city. I thought I knew my city really well but […]