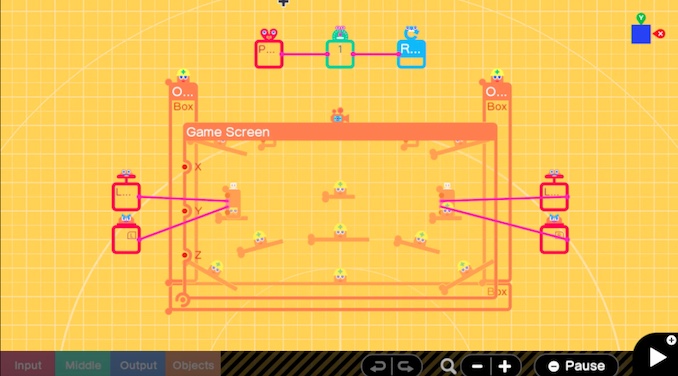 A “game creation” game based in a simplified programming language.

It’s a fun place to test your programming skills. 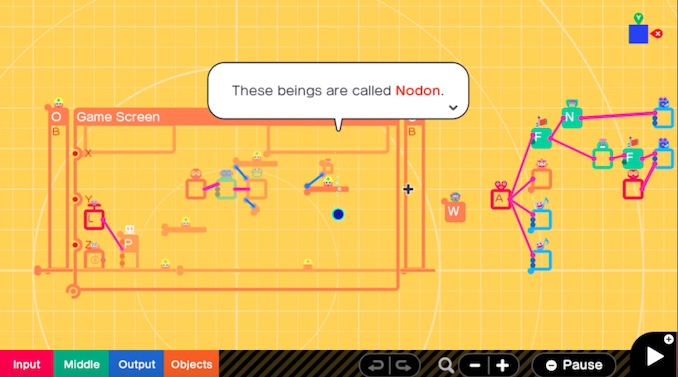 COME ON IN, THE WATER’S CODE

I have spent too many hours on YouTube marvelling at the player creations crafted in “maker games” such as Super Mario Maker, Roblox, LittleBigPlanet, and Minecraft. It never ceases to astonish me how someone can take, say, the toolkit of Dreams and design a one-to-one remake of the first level of Metal Gear Solid. I mean, there are people who build computers inside of Minecraft for crying out loud! They are smarter and more creative than I’ll ever be.

Nintendo’s latest foray into the creator space, following its cardboard-centric Nintendo Labo experiment, is the brand new Game Builder Garage. It is, mercifully, designed for kids, which means that a dolt like me can actually comprehend what’s going on. While it’s definitely limited compared to others in the genre, it’s a user-friendly way to dip your toes in the programming waters. In a good way, it reminds me of some of those “teach kids to code” board games that are all the rage these days. 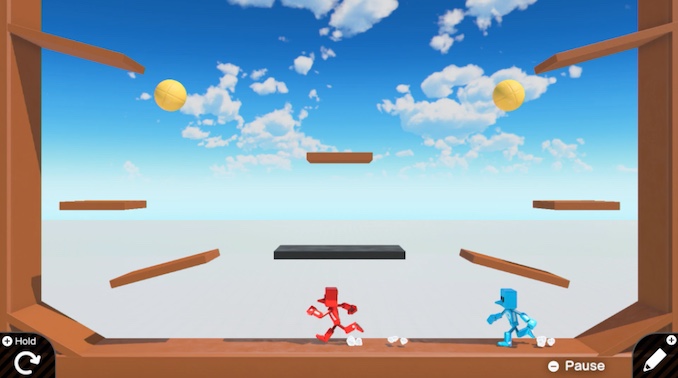 Game Builder Garage is, in essence, one very long tutorial. It’s designed to teach you, step by step, node by node, how to implement basic programming tools through an easy to understand visual interface. Picture a series of Input/Output triggers, each one clearly labelled with what it can do. Movement (red nodes), audio output (blue), basic logic operations (green), and physics (orange). I’ve oversimplified it somewhat, but the game does a good job of teaching you how to use each category – represented by cutesy anthropomorphic figures known as “Nodons” – and eventually to string them together to make working minigames. If you’re anything like me, you may not get much further than that: building a series of simple minigames, fooling around in them, and then getting overwhelmed by the possibilities of crafting one from scratch.

Happily, the Internet is here to come to the rescue, with players already sharing Garage creations ranging from the ridiculous (the inevitable Flappy Bird clones) to the sublime – a working Mario Kart course. It’s unfortunate, then, that Nintendo refuses to let players share these in a publicly searchable database. Instead, the only way to access anything is to browse the Internet (game sites, reddit, YouTube) for the best creations and then manually input their access codes in-game. It’s an incredibly dumb restriction for a game predicated on user creation, albeit one easily explained by Nintendo’s obsession with “kid-friendliness.” No public database means no angry parents after their kids stumble across an R-rated minigame. But it also means it’s a slog to find the best content, and Garage creators will never have the satisfaction of seeing their titles rise to the top of the charts as in, well, any other creator game. 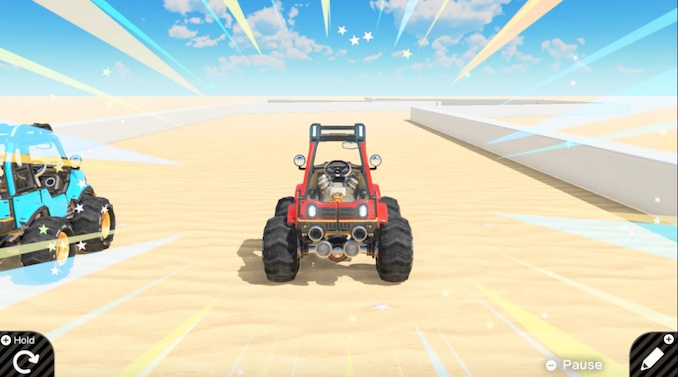 I appreciate how much Garage holds my hand as I work through its detailed, involved, game creation space. The colour coding, the insistence that I complete a specific task to perfection before moving on to the next: it’s a wise pedagogy that, while discouraging experimentation, does ensure that any player will grasp the basic toolset by the end. I also like how its seven tutorial games – as in, the games that you actually develop, Garage gently walking you through how to do so – are fully playable. It’s deeply rewarding to hop into the sidescroller or racer that you created with your own two virtual hands.

That said, it’s unfortunate that Nintendo’s rigid “kid-friendliness”, combined with a harmful attitude towards copyright and fair use doctrine, means that there are limits to what players can do. Unlike pretty well any other “creator game”, Garage does not allow you to import your own sounds, textures, images, or pretty much anything customizable. That hasn’t stopped players from, you guessed it, making their own Metal Gear Solid homages (check YouTube) but I sometimes get the feeling that Garage is actively working to prevent the most exciting kind of experimentation. (Also, the web of “nodons” that goes into creating even most simplistic games, like the player-created Tetris I’ve seen, is truly mind-boggling.)

Garage is no Dreams (argably the standardbearer for console “creator games”), but it doesn’t have to be. Like any other first-party Nintendo product, it’s an elegant package of finely tuned, accessible gameplay. Only this time, you’re the one making the game.