Our review of Lost in Random, developed by Zoink. Available now for PS5 (reviewed), PS4, Xbox X/S, Xbox One, Switch, and Windows. 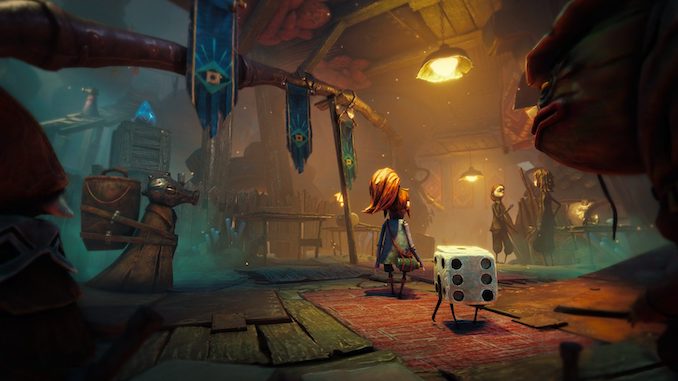 It has some fun ideas, but nothing special. 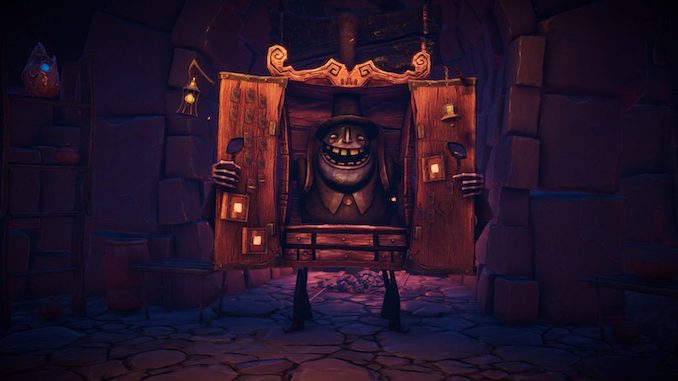 Toronto geek that I am, I’ve managed to meet (and obtain autograph of) Ryan North several times. North is the Toronto-based creator of the delightful, consistently funny, and remarkably long-running Dinosaur Comics, a webcomic exploring everything from PG-13 Canada Day celebrations to bog people to declaring parts of your life “non-canon” to avoid responsibility. North’s success with Dinosaur Comics landed him gigs at Marvel and Archie Comics, not to mention a couple Eisner awards and, at one point, the #1 best-selling book on Amazon. The man is funny, he’s made an art out of breaking the fourth wall, and it makes perfect sense he was hired to write the Tim Burton-inspired Lost in Random. It’s unfortunate, then, that much of what makes North great has been lost in the translation to an interactive medium. Lost in Random is cute, and has moments of inspiration, but too much of it lands awkwardly, like a lopsided die. 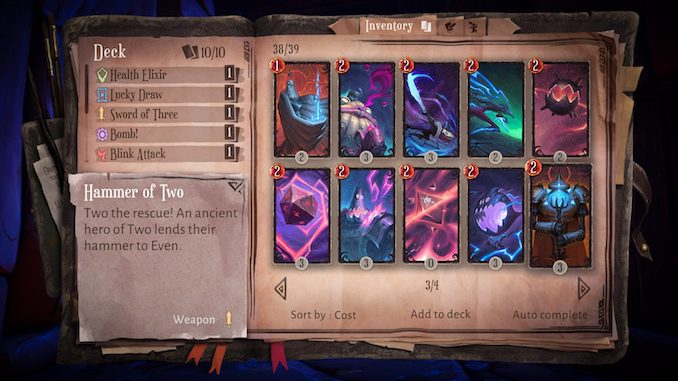 It looks like a Tim Burton creation, and has the soundtrack to match, but Lost in Random pales in comparison to other Burton-alikes (notably Tim Schafer’s Psychonauts). Lost in Random is a fantasy adventure following Even, a 12-year-old girl whose sister, Odd, is taken away by an evil queen. Even, with the help of her magical die “Dicey”, must embark on an epic quest to reunite with Odd and, hopefully, save the kingdom. The kingdom is divided into six realms, from the lowly Onecroft (home of Even and Odd) to Two-Town and Threedom and so on. Each realm’s numerical theme feeds into its structure; for example, Threedom is the site of a three-way civil war between the competing heirs to the Threedom throne.

Lost in Random‘s first major problem, one which it never entirely overcomes, is that it squanders the whole random die-roll concept. You see, Even can roll her magical die mid-combat to activate various effects. If you assume, as I did, that the game’s core mechanic would be built around luck, you’d be mistaken. Really, all that rolling “Dicey” accomplishes is to pause combat, calling up an Attack/Spell/Item menu that’s structured as a set of playing cards. There’s slight randomness to which cards appear, but the whole system just reeks of Final Fantasy‘s Active-Time Battle system, with the dice and cards creating the thinnest veneer of “luck-based” gameplay.

Lost in Random would have been better served by a system where die rolls directly affected your status, enhancing or impairing your abilities. You could easily imagine a game where you unlock, say, a loaded die that tilts the odds in your favour, while enemies have their own tactics to ruin your luck. Lost in Random is not that game. 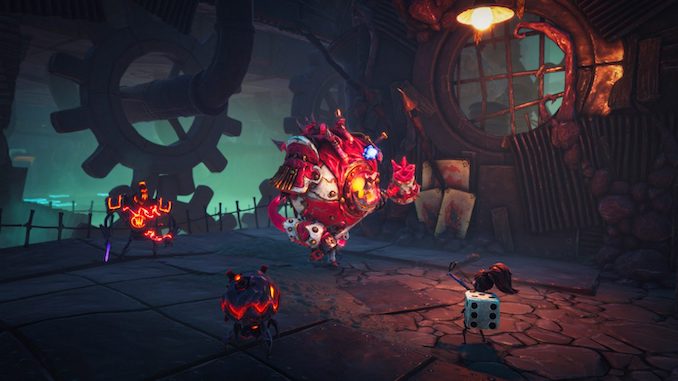 Lost in Random is not one of Ryan North’s best works. He’s a master of witty, self-aware dialogue, but here too much of it seems to have been written just to push the plot forward. Yes, there are some kooky Burtonesque characters, and some of the NPCs are amusing, but for a game with such lengthy dialogue sequences, I rarely found myself laughing. There are also some quirks which suggest North’s writing may have been tampered with. The sisters Even and Odd constantly refer to each other as “sis”, a bad writing crutch which T-Rex from Dinosaur Comics would be the first to criticize. It’s also annoying how the game uses the word “dice” for a singular die, as in, “I have a dice, I’ll throw it now.” I find it hard to believe that North, who has cultivated a reputation as a grammar nerd, would be guilty of this grammatical sin.

Lost in Random is a good example of a decent idea thwarted by odd choices. Why hire Ryan North, and not free him up to write a fourth-wall-smashing all-ages adventure, in the vein of his award-winning Squirrel Girl? Why build a game around die rolls, only to reduce everything to an RPG-style combat menu? Why do the combat sequences drag on for so. friggin. long?

I did like the story, and it was refreshing to play a kid-friendly game that didn’t rely on lazy humour or overly simplistic mechanics. But a half-baked fairy tale is still half-baked. That’s not random, that’s just lame.

Visit the official page for Lost in Random here.

Our review of Tekken 7: Definitive Edition, developed by Bandai Namco. Available now for PS4 (reviewed), Xbox One, and PC. […]