By the time the early ’80s had struck, the graffiti scene was established and robust in downtown Toronto. Elaborate networks of crews scoured the streets, seeking refuge from their true identities under aliases. Beneath the somewhat polished surface of Toronto, outfitted with hurried business people and corporate agendas, laid a vibrant subculture. The world of graffiti welcomed creative freedom and effortlessly coalesced with hip hop, breakdance, and DJ culture, tempting artists and rebels alike.

However, while the graffiti community may appear scruffy or unkempt, upon closer investigation it can be recognized as a true art form, often mingling with the principles of fine art. As Rons said, “Graffiti and fine art share all the fundamentals of design, composition, flow, colour theory. It’s all art, and lots of fun for me”.

By its very nature, graffiti is an illegal art form. For this reason, there exists a dynamic reminiscent of the old “cops and robbers” paradox, between artists and the police. As Jafar told me, “once I was in Queen Alley being interviewed by Much Music, but I had to keep my face hidden because there were cops all around”. In addition, several of his characters can be seen either mocking or calling out public officials of the Toronto Police Department.

As graffiti gained popularity in the ’80s, police became more aware of the downtown presence, and tightened the reins on their control of vandalism. However, in a sense this backfired, by giving graffiti artists the ammunition and motivation they needed to rebel against the orthodox mold that the city was trying to fit art into. This is one factor that has played into the sense of addiction that many graffiti artists feel, the electricity pulsing through their veins as the adrenaline is released when they defy the norm of submission to authority. As jafar jokes, “maybe it has something to do with the aerosol fumes, but it took me quite a while to quit painting in a serious manner”.

Over the course of the last 20 years, the graffiti community in Toronto has evolved immensely, and the once trademarks of the artform have since been revamped almost beyond recognition. The bulk of the change has occurred between 2002 and the present, not coincidentally mirroring the progression of the digital era.

Today, graffiti has grown into a wider community, enveloping more painters and in turn gaining more acceptance. Now, areas that were once flooded with police raids to clear out the defiant adolescence have been turned into designated graffiti destinations, such as Graffiti Alley, the Milky Way in Parkdale, the Keele Wall and the Ossington Laneway. Here, members of the public often photograph and admire the detailed work, and graffiti festivals are even held, uplifting the art form. As a byproduct of its greater acceptance, there is now a stronger appetite for commercial art from businesses, such as commissioned murals. While from one perspective this may seem like a betrayal of the once insubordinate art form, this provides a stronger income for graffiti artists, and is a vital means of making money.

Perhaps one of the most groundbreaking developments, is the surge in popularity of online platforms within the graffiti community. In its embryonic stages (around 2000), the internet was used as a vessel for artists to create their own websites, however, this form of promotion was not yet in vogue or particularly effective. Today, social media plays an essential role in contemporary graffiti. Upon a stroll down the intricate alleyways of Ossington Avenue, one can see magnificently rendered murals, almost all with an instagram handle scribed at the bottom.

With this self promotion, comes the possibility for more fame and exposure, and therefore employment and commission work. In addition, it has the power to inspire artists to create better work, as they are almost guaranteed that more people are going to see it. As Rons pointed out, “with social media, everyone has access to see all the best stuff from around the world, I think that pushes everyone to take the art to higher levels”.

However, this can give a certain robot like effect to graffiti art, driving artists to subconsciously paint only for the photo. “Painting becomes for the purpose of posting it, and artists forget about the actual lived experience”, as Jafar noted. The privilege and enjoyment of painting becomes muddled by the rush to post the picture and get paid. This nature of posting and gaining a significant following also removes one of the telltale characteristics of graffiti artists from their 90s prime which separated them from the rest of the art scene. This characteristic is anonymity.

Today, with every mural or lettering’s artist’s contact information presented right at the bottom, the anonymity is removed and with it the mystique is chipped away at. Traditionally, the purpose of having an alias was to prevent possible legal implications in the era of graffiti’s ostracized nature in Toronto. Graffiti artists would aspire to become well known within their subculture, but not necessarily to the public. However as graffiti has become more accepted, the true identity of a painter has presumably been becoming less of an issue. With artists pinpointing themselves purposefully, it takes away from what was once the scandalous nature of graffiti, it’s inaccessibility displaying it as desirable or cool to an observer’s eye. 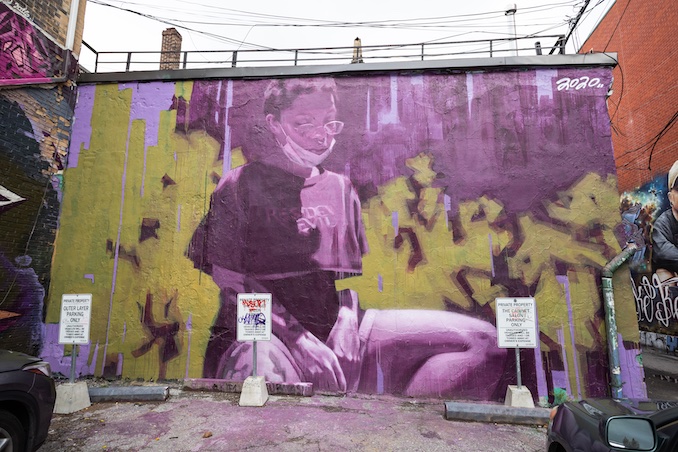 All this ties into say, that to graffiti artists, Toronto isn’t seen as it used to be seen. Previously, all surfaces, subway walls, sides of buildings and garage doors were seen as a blank canvas so to speak, and a photograph or public recognition was almost irrelevant. The power of creating meaningful and impactful art was the driving factor in one’s choice to risk their legal security to leave Toronto with a new spectacle. Paintings were done to please passersby, and to bring little pockets of joy to the city, pops of colour into the otherwise drab grey concrete jungle. As Rons said, “I’ve always been drawn to doing public art, whether it be graffiti murals, or “art” murals because it’s for everyone.” Today, for better or for worse, the community of graffiti has transformed into a more widely accepted, though increasingly commissioned, form of art, perhaps on track to be ruled by the digital revolution.

Today’s daily photo is by Randy McDonald and is of mural by Toronto artist birdo. Check out more pics by […]

“A Day in the Life” with Toronto artist birdO

“A Day in the Life” with Toronto Artist Elicser Elliott

Elicser Elliott explores narrative structures, new surfaces, and new sensations in his work, through the lens of two decades spent […]