The Hot Docs Film Festival is one of our favourites in the city and like many of our city’s arts and cultural events, everything will happen online this year. The good news is documentary lovers will have access to over 135 thought-provoking, knee-jerking and often entertaining films right in the comforts of their own homes.  Ontario audiences will be able to stream films on the recently launched Hot Docs at Home TVOD platform. Hot Docs Festival Online will run from May 28 to June 6. After the Festival, a majority of titles will be made available for an extended viewing window until June 24, subject to availability. 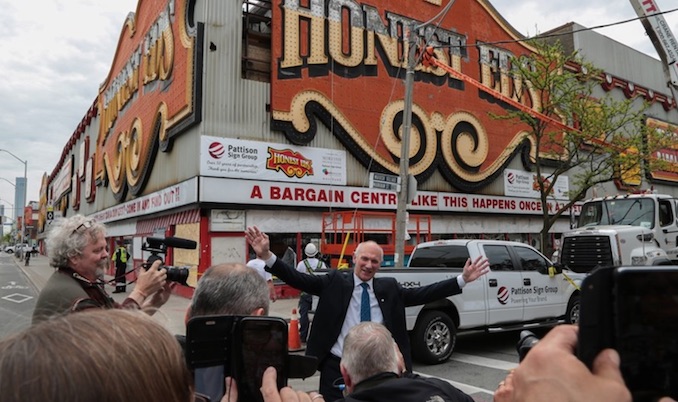 As always, there are quite a few titles that grab our attention. This year, we’ve made note of the following films and look forward to checking them out! Check out the full line up at www.hotdocs.ca. Here’s what is on our radar with each film’s synopsis…

MEAT THE FUTURE: directed by Liz Marshall (Canada). World Premiere. Chronicling the birth of an industry, Meat the Future is a close-up and personal look at the visionaries who are risking everything to innovate and produce real meat without slaughtering animals and without environmental destruction. It could also prevent zoonotic foodborne disease and the next health pandemic. The prospect of meat consumption doubling by 2050 is not only sobering, it is a wake-up call for solutions. Compared to conventionally-produced beef, cell-based beef is estimated, at scale, to reduce land use by more than 95%, climate change emissions by 74% to 87%, and nutrient pollution by 94%. Filmed exclusively between 2016 and 2019, Meat the Future follows the genesis phase of the clean meat movement in America, behind the scenes with its pioneers – they are activists, scientists, researchers, marketers and policy experts, all focused on the goal of an ethical, sustainable and profitable food future.

iHUMAN: directed by Tonje Hessen Schei (Norway). World Premiere. A political thriller about artificial intelligence, power and social control. From the inside of the booming AI industry, this film shows how the most powerful and far-reaching technology of our time is changing our lives, our society and our future. iHUMAN follows pioneers at the frontline of the invisible AI revolution to see how this technology is developed and implemented. Through some of the brightest minds in the AI industry iHuman draws the roadmap to where we are going. Who punches in what codes for our future? How does AI impact who we are? This film also shows a growing conflict in the tech world. On one side corporations like Google claim, we need AI to solve climate change, cancer or hunger. On the other side, people like Bill Gates and Elon Musk fear AI is the biggest threat to humanity. iHuman investigates the consequences of the power concentration of the multi-billion dollar AI industry that barely has any regulations. Some compare artificial intelligence to the nuclear bomb as we do not know the potential power or the consequences of this new technology. What is coming our way? NOTE: Hot Docs Online Live Event: Sunday, May 31, 3:00 PM Featuring Hao Li, deepfake pioneer; and Lee Fang, investigative reporter, The Intercept.

MADE YOU LOOK: A TRUE STORY ABOUT FAKE ART: directed by Barry Avrich (Canada). World Premiere. This crime documentary about the largest art fraud in American history set in the super rich, super obsessed and superfast art world of New York. Controversy erupts when an unassuming couple floods the art market with a collection of fake art sold for millions to the prestigious Knoedler Gallery who then sold the art to collectors and the art world elite, in this entertaining and suspenseful tale of an $80 million ingenious con that everyone wanted to believe was real. NOTE: Hot Docs Online Live Event: Tuesday, June 2, 7:00 PM Featuring Maria Konnikova, author, The Confidence Game; Don Thompson, author The Orange Balloon Dog: Bubbles, Turmoil and Avarice in the Contemporary Art Market; Patricia Cohen, reporter, The New York Times, and director Barry Avrich.

THERE’S NO PLACE LIKE THIS PLACE, ANYPLACE: directed by Lulu Wei (Canada). World Premiere. The film follows the historic Mirvish Village community as it looks at the gentrification of Toronto told through the stories of people affected by the closure of the iconic discount store, Honest Ed’s.

CANE FIRE: directed by Anthony Banua-Simon (USA). World Premiere. The Hawaiian island of Kauai is seen as a paradise of leisure and pristine natural beauty, but these escapist fantasies obscure the colonial displacement, hyper-exploitation of workers, and destructive environmental extraction that have actually shaped life on the island for the last 250 years. Cane Fire critically examines the island’s history—and the various strategies by which Hollywood has represented it—through four generations of director Anthony Banua-Simon’s family, who first immigrated to Kauai from the Philippines to work on the sugar plantations. Assembled from a diverse array of sources—from Banua-Simon’s observational footage to amateur YouTube travelogues, to epic Hollywood dance sequences— Cane Fire offers a kaleidoscopic portrait of the economic and cultural forces that have cast indigenous and working-class residents as “extras” in their own story.

#BLESSED: directed by Ali Weinstein (Canada). World Premiere. C3 is an Evangelical church that opened in Toronto in 2013, quickly amassing a large following amongst the city’s young, hip and tattooed. #BLESSED offers an intimate look inside this fast-growing millennial church and follows the process of selling salvation in the 21st century. Pastor Sam and his team grow the church from two locations to three, living out their mission to save as many Torontonian souls as possible. 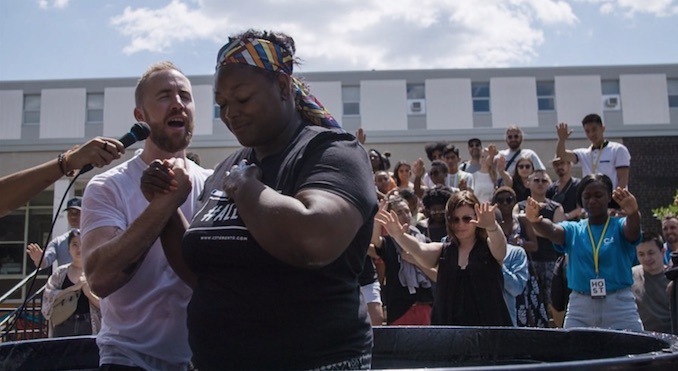 INFLUENCE: directed by Richard Poplack and Diana Nellie (South Africa/Canada). Canadian Premiere. Lord Tim Bell softened the images of dictators and made the careers of controversial politicians. He helped the old apartheid rulers in South Africa benefit at the end of the regime and beyond (and later tried to foment a race war there.) Bell Pottinger, the company he co-founded, was one of the most powerful PR firms of all time — among other things, they created cynical soap operas and commercials to try to convince Iraqis to embrace “regime change.” A founding executive of the legendary ad agency Saatchi & Saatchi, the brash young Lord Bell helped usher in an advertising revolution, kicking off a process that would eventually see his company attempting to change the attitudes and even the behaviour of citizens around the world. But his evolution into the godfather of spin began with his stint as the architect of Margaret Thatcher’s ascent to power as British Prime Minister. His three-time success in getting the “Iron Lady” elected allowed him the confidence of world leaders, and earned him a reputation as the world’s greatest PR “fixer.”

MAYOR: directed by David Osit (USA/UK). Canadian Premiere. An engrossing and hilarious real-life political saga following Musa Hadid, the Christian mayor of Ramallah, during his second term in office. Surrounded on all sides by Israeli settlements and soldiers, most people in Ramallah will never have the chance to travel more than a few miles outside their home, which is why Mayor Hadid is determined to make the city a beautiful and dignified place to live.

LESSONS OF LOVE: directed by Malgorzata Goliszewska and Kasia Mateja (Poland). North American Premiere. After escaping from a marital nightmare, Jola is letting loose with her friends and finds herself in a new romance at a Latino dance class. The drama evolves when the conservative powers of her generation try to justify her abusive husband. A highly cinematic and joyful journey into a woman’s battle to reinvent herself in her best age of life – when you are 69.

CONSUMING CONTEMPORARY: directed by Ana Aleksovska (Macedonia). International Premiere. Short. A group of seniors enjoy Skopje’s cultural events on a daily basis, as well as the food offered there. When societal judgment is about to stop their way of having fun – they realize how much more this habit means to them.

ALWAYS AMBER: directed by Hannah Reinikainen and Lia Hietala (Sweden). North American Premiere. Amber is a 17 year old teen. Together with best friend Sebastian, they share a world far away from the judging eyes of the society as two queer youngsters. But when Sebastian falls in love with Ambers girlfriend everything starts to fall apart. A story about trust issues starts to reveal itself and in the midst of it all Amber has to face going through their transition alone. 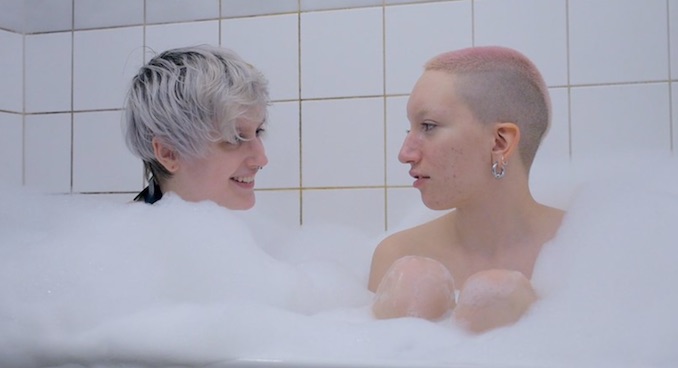 EDDY’S KINGDOM: directed by Greg Crompton (Canada). Ontario Premiere. This archival documentary recounting the previously untold story of Canada’s most monomaniacal entrepreneur, Eddy Haymour, and the stranger-than-fiction methods he pursued to construct an island theme park in British Columbia’s Okanagan Valley. It focuses on a Lebanese-Canadian immigrant who straddles two cultures, and who, in an effort to realize his dream, staged a week-long hostage taking in the Canadian Embassy in Beirut, Lebanon. The subsequent fallout is chronicled and this documentary shows all sides.

DADDY: directed by Lars Leonhardt and Brendan Cooney (Denmark). International Premiere. A tragicomedy about the perils of fatherhood. Challenging traditional gender roles and toxic notions of masculinity. Brendan, an American anthropologist who roams the world to study falls in love in Denmark and becomes a father. His life becomes the subject as he offers a funny perspective of being a father.

THE DILEMMA OF DESIRE: directed by Maria Finitzo (USA). International Premiere. This film explores the work of four women who are shattering myths and lies about female sexual desire, bodies and – ultimately – power. It’s a powerful reminder that true equality will come only when we all arrive at a place of understanding and acknowledgment that women are sexual beings, entitled to live their lives fully within the expression of their desire.

Kensington Market continues to be like no where else in the city. Today, it’s a concentration of many cultures within […]