This week we spoke to Toronto comedian Tom Henry about his comedic influences and where we can find him in the city. His first comedy special, 66 Jokes, is now streaming on Crave TV. 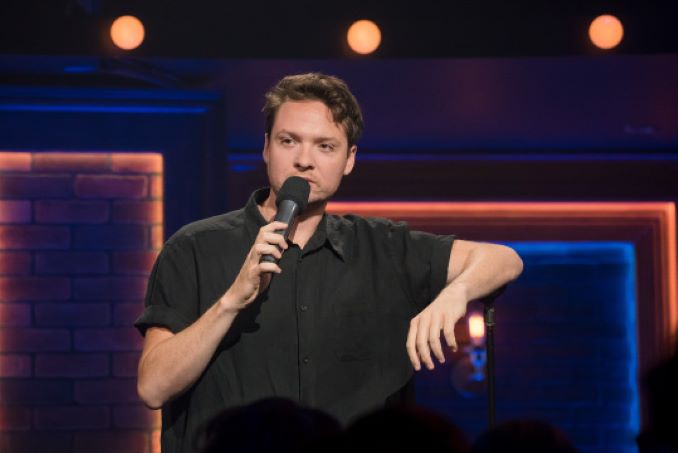 I tell short jokes that are over quickly and then there’s another one. They call me deadpan, but I think that’s just how I talk. They also call me dry, this is not moist comedy.

Letterman was king for me growing up. I started watching him when I was 7 or 8 because I was often up with stomachaches. I owe my sense of humour, and the millions I’ve made doing comedy, to those stomachaches.

Andy Kindler. Andy is one of the few comedians I can watch for long periods of time and not start to get antsy. He’s like Catskills meets punk rock. I watch him with pure delight. He’s also been very kind to me and many other young comedians I know, which is a bit rare for a big shot American coming to Canada to do shows.

Carb load. JK. I try to shake my body loose a bit. I saw documentary footage of Jack Nicholson doing a sort of psychotic version of it before he puts the axe through the door in The Shining. Mine is less psychotic. Looseness is important.

Andy Kindler’s Alternative Show at Just for Laughs is always a dream to do. I’ve been lucky enough to do it a number of times, and it always feels like Christmas. I know that’s not exactly a “place” but what even is a “place”, other than a particular position or point in space (just googled it mid sentence), you know?

In ordinary times, being at Comedy Bar a lot, you see new stuff all the time. In Covid times, I discover a lot of new talent watching sitcom reruns. Have you heard of this Ted Danson kid? This guy has got it.

My first comedy special ’66 Jokes’ is streaming now on Crave TV. It’s really good. Please watch it. If you don’t like it, watch it anyway to get the numbers up.

There are lots but I will say Jackie Pirico. She’s very funny and very small.