Naija Wives Of Toronto is a YouTube series that follows the lives of five Nigerian-Canadian women and how they navigate life, careers and families in Canada while still trying to stay true to their Nigerian culture.

The idea came to Uche Nwokeji, Rachael Omobude and Abby Ayoola, the show’s creators, who wanted to showcase Nigerian culture, individuality, and identity — something they feel is lacking in mainstream media. “We feel like we are in between cultures, where we are not your typical Nigerians or your typical Canadians,” said Ayoola. “We are stuck in the middle and we want to showcase both sides. Another reason is because there wasn’t a show showcasing Nigerians living in Canada. We don’t see people like us on TV, so we decided to fill the void by introducing the world to Nigerian/Canadian culture. We also felt that it was the perfect time to launch because all eyes are on the 6ix!”

The reality-style show follows the daily lives of the original cast members are Uche Nwokeji, Rachael Omobude, and Abby Ayoola. In the most recent series, the show introduces two new members Emilian Andrew and Matilda Harry. Similar to the all too familiar “Real Housewives” franchises this series deals with common themes of juggling family life, careers, friendships but also delves passionately into struggles with resolving conflicts, lifestyle habits, and dealing with cultural alienation. 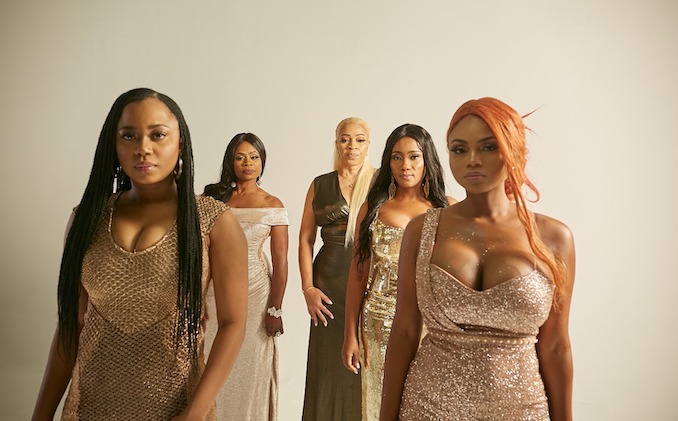 How did they all meet? Ayoola tells us, Uche and Rachael have been friends before the idea of the show came along. Uche planned Rachael’s 50th birthday in 2018 and they have been friends ever since. Matilda and Abby are long time friends and Emilian was introduced to the group via Uche. “We all pretty much met via mutual friends,” said Ayoola.  “We felt having such a diverse cast within the Nigerian community is also good for the show because we all represent different tribes, languages and cultures from Nigeria. For example, Uche is from Igbo tribe, Rachael is from Benin tribe, Abby Ayoola is from Yoruba tribe, Emilian is half Igbo, half Yoruba, and Matilda is half Delta, half Calabar tribe.”

What else do the women of the show want us all to know? “Even though we are of a different culture, we still face many of the same obstacles and challenges. We might fight on the show but we always find a way to come back together. We all juggle our businesses, family, friends, and careers while still looking good!” said Abby.

Naiji Wives of Toronto is self-funded and executively produced by an all-female cast.

Here is a link to their Youtube channel
www.youtube.com/naijawivesoftoronto

New Home Decor Series You Need to Watch Before You Remodel

It’s always surprising how much of an impact a simple home improvement can have on your quality of life. There’s […]